What’s the Plan for the Hogg Bird Sanctuary?

Anyone interested in the future of that small bit of brambly bird paradise on Buffalo Bayou known as the Hogg Bird Sanctuary will want to attend the public meeting on Monday evening, May 9, near Memorial Park.

The 15.56 acre public park at the end of Westcott Road south of Memorial Drive was donated to the City of Houston in 1958 by the late Ima Hogg as a nature preserve. In 1924 the Hogg Family had sold at cost to the City of Houston the land that is now Memorial Park, formerly a part of Camp Logan. The bird sanctuary is now part of Memorial Park and includes a large parking lot, a visitor center, as well as the entrance to the footbridge that leads across the bayou to Ima Hogg’s former home, now the Bayou Bend Collection and Gardens, a part of the Museum of Fine Arts, Houston.

In 2014 the sanctuary was listed as one of Preservation Texas’ Most Endangered Places because of the threat from the Memorial Park Demonstration Project.

The meeting is to update the public on proposed plans for the park, for which the Houston Parks Board reportedly has received a $1 million gift. According to the announcement, a steering committee of stakeholders, using the Memorial Park Conservancy’s Master Plan (see page 132) as a starting point, has conducted additional research with consultant Design Workshop and developed new ideas.

Who Is On the Steering Committee?

The individuals on the steering committee varied from one meeting to another, said Catherine Butsch, communications manager for the Houston Parks Board, in an email. “But the groups represented include Memorial Park Conservancy, Houston Parks and Recreation Department and Houston Parks Board along with the Garden Club [of Houston] in an advisory capacity given their active studies of the site [see page 134],” she wrote. “Others consulted as part of the process include the Harris County Flood Control District, Museum of Fine Arts Houston, Houston Audubon as well as the Garden Club and Rice researchers.”

The meeting will take place from 6:30 to 7:30 p.m. in the Fellowship Hall of St. Theresa’s Catholic Church, 6622 Haskell Street, on the northeast side of Memorial Park. The Houston Parks Board, along with the Memorial Park Conservancy and the Houston Parks and Recreation Department, is sponsoring the meeting. 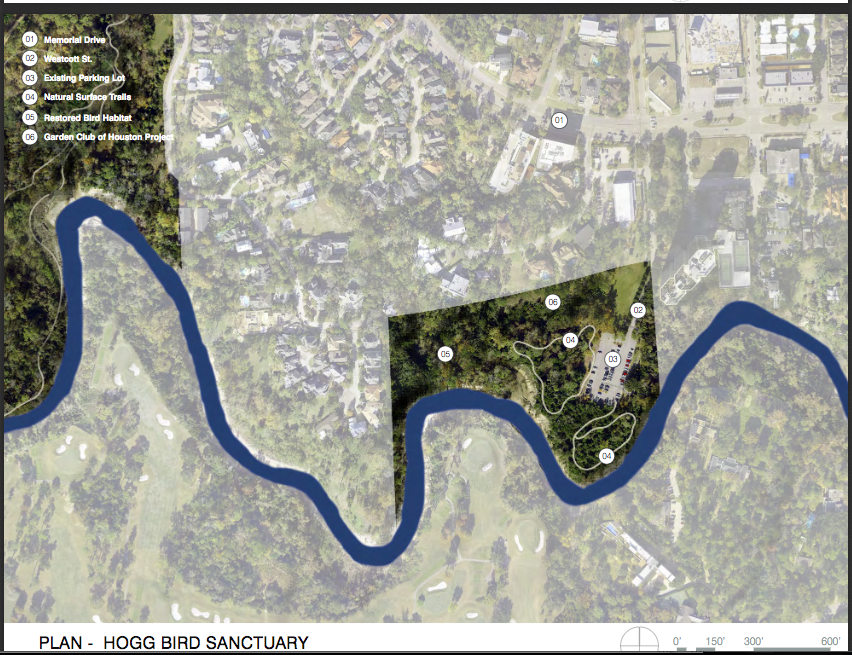 The 2014 Memorial Park Master Plan for the Hogg Bird Sanctuary.

2 thoughts on “What’s the Plan for the Hogg Bird Sanctuary?”