$12 Million Bayou Project Based on a Mistake

The instability of riverbanks is generally divided into two types: banks that collapse vertically and banks that are worn away laterally or horizontally by the erosive force of the water flowing downstream.

Vertical collapse is called slumping or sloughing. The face of the bank slides or rotates away, often leaving a concave scar or scarp in the bank and a clump of sediment at the base. Sometimes the slump takes trees and vegetation with it. The vegetation can continue to grow in the collapsed sediment, which creates a sort of terrace or beach at the foot of the high bank.

According to a lengthy analysis by geologists working with Save Buffalo Bayou, slumping is the primary type of bank collapse on Buffalo Bayou in the stretch targeted for a $12 million “stabilization” and “restoration” project by the Harris County Flood Control District. 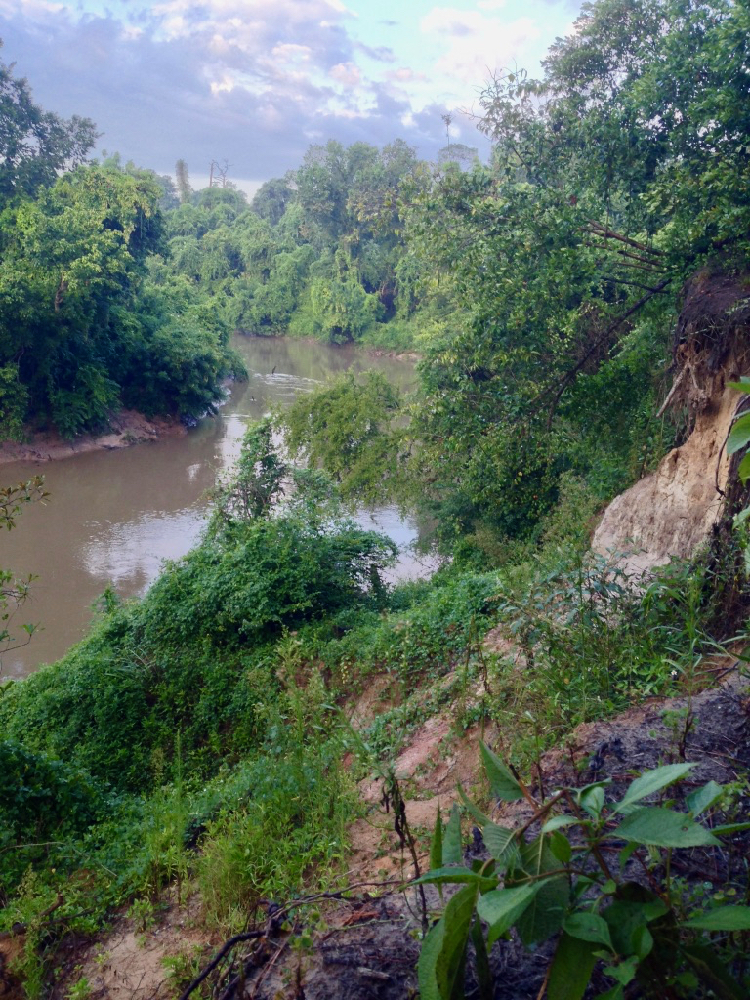 This steep, high bank in Memorial Park slumped after the Memorial Day 2015 storm, taking plants and bushes with it. Photo by Susan Chadwick looking upstream on April 10, 2017.

But the engineering consultant working for the flood control district describes what is happening to the high banks of the bayou in the project area as “shear stress,” which is the lateral or parallel drag of the water flowing past the banks and down the channel.

The district’s permit application to the Corps of Engineers repeatedly refers to shear stress and shear stress only, specifically ruling out vertical instability. (“Vertical stability not an issue.” P. 39.) The Corps’ Environmental Assessment, released in May in conjunction with the granting of a permit for the project, also refers exclusively to shear stress.

“The assessments conducted by HCFCD’s design team indicated that due to the erosive nature of high flows in the bayou … hydraulic energy dissipation measures (bankfull benches, pool and riffle reestablishment, channel pattern adjustments, and in-stream structures) were necessary in the design to relieve shear stress on the streambanks of the bayou, and ultimately stabilize the channel system,” stated the Corps on page 21 of the Environmental Assessment.

The Corps’ Environmental Assessment found that the proposed project, which would use heavy equipment to raze most of the trees and vegetation and dredge, fill, reroute, and reconfigure the channel, historic high banks and meanders of more than a mile of forested Buffalo Bayou flowing past Memorial Park, would have no significant impact on the environment.

Remedy Decided Before Problem Was Analyzed

But Flood Control’s project, known as the Memorial Park Demonstration Project, is based on an error. Shear stress—lateral erosion—isn’t the primary problem in this stretch of Buffalo Bayou. Slumping—vertical instability—is what naturally happens on our 18,000-year-old bayou. (And it’s only a “problem” if you, say, unwisely took down the trees and built your house or your mowed golf course on or near the edge of a bank.)  The project will do nothing for slumping, for which there is little remedy anyway.

Even worse, the proposed “in-stream structures”—wads of tree roots to be installed to “stabilize” the toe or bottom of the banks to protect them from shear stress—will likely also slide away.

The controversial project, not yet under construction, is based on a mistake. And it probably will fail, leaving behind a wasteland of denuded and weakened banks. That has happened elsewhere with these controversial Natural Channel Design methods. (See also here.)

The promoters of the project, who include the Bayou Preservation Association and the Memorial Park Conservancy, decided years ago to use Natural Channel Design to “fix” the bayou and demonstrate what they believed to be a superior method of erosion control.

The remedy was decided before the engineering consultant, Kellogg Brown and Root (KBR), or apparently anyone else, had done an analysis of the problem.  Except that the same engineering firm, or its predecessor, Brown and Root (BR), had done a study in 1995, almost twenty years earlier. That study came to somewhat different conclusions: vertical stability was an issue.