The Memorial Park project requires a permit from the US Army Corps of Engineers under the federal Clean Water Act because it would dredge and fill protected federal waters, defined as waters of a navigable stream below the Ordinary High Water Mark, as well as its tributaries and adjacent wetlands.

Riparian areas—the structured soil and sand, trees and plants along a waterway— are vital for cleansing our waters and even can be more cost effective than sewage treatment plants.

The project, by destroying existing riparian forest, a type of wetland, violates current federal law as well as federal and state policy urging the preservation of wetlands and riparian areas. It also violates Texas state law requiring the flood control district to conserve forests. In addition, by razing hundreds of trees and vegetation along the stream, it bizarrely demonstrates to landowners exactly the wrong thing do to for erosion control. Landowners should not remove trees and vegetation on the banks of streams, or even cut the grass or run heavy equipment over the banks. Sadly, the flood control district does all of those things.

In October of 2015 the White House issued an Executive Order directing federal agencies to incorporate the value of ecosystem services into their decision-making and planning. Defining ecosystem services as “benefits that flow from nature to people,” the order recognized that “nature provides vital contributions to economic and social well-being that are often not traded in markets or fully considered in decisions.”

Several months ago residents on the north bank of the bayou downstream from Memorial Park reported that personnel from the flood control district were conducting surveying work near their property. Jason Krahn, construction division project manager for the district, explained in an email at the time that the survey work related to district easements that would be abandoned on the north bank and added on the south bank.

The flood control district owns the bank in front of those residences downstream from the park in the project area. The proposed project extends from there into the Hogg Bird Sanctuary, owned by the City of Houston, public property that also fronts several large private residences. And the entire south bank of the project—half the project—is on land owned by the River Oaks Country Club, which is contributing only one-third of the overall projected $6 million initial cost. City of Houston taxpayers are paying another $2 million minimum, with county taxpayers paying the rest.

It’s a cool deal for the elite private club, whose members include many of the city’s power brokers and decision-makers. The club gets a taxpayer subsidy to repair its high banks undermined by their own poor land management practices—stripping the old river oaks forest and vegetation on the high bank and extending the mowed and watered golf course up to the edge. The club, like all private country clubs in the state, enjoys an unusual taxpayer-subsidized property tax reduction under the state’s Green Belt law, and as a nonprofit organization also pays no federal income tax. Last summer the club went ahead and installed concrete riprap in two places along the bayou where poor management practices were causing the most erosion. Riprap, and other forms of bank hardening, is recognized as one of the more environmentally damaging methods of erosion control.

A Fanciful Imagination of the Engineered Future

More recently the district has made overt appeals to the public promoting the project. On the front page of its website the district posted a seven-minute video advertising the work of the Vegetation Advisory Workgroup for the “demonstration project.” We won’t provide the link, but it was published on YouTube on May 23, 2016, under the category “Comedy.” (Seriously!)

The district’s webpage for the demonstration project also has been updated with photographs taken in January 2016 and with fanciful renderings of what the project area might look like in five and ten years time. That would be after the district finishes spreading out lucrative engineering contracts to destroy the bayou’s ecosystem, destabilize the banks with backhoes and install plants that will somehow, without changing any of the upstream conditions or adjacent land management practices, miraculously survive better than what nature in its infinite wisdom has established over a very long period of time.

The bayou is a living river, biologically diverse, ever changing, adjusting, adapting, and in this stretch it does just fine on its own, for free, stabilizing and preparing the banks for new growth, replanting the necessary plants in the proper order, despite record high flows.

The district and project supporters claim that wildlife will return and that ecological function will be improved by dredging the channel, removing most of the vegetation and digging up the banks. These claims simply have no support in the scientific literature. 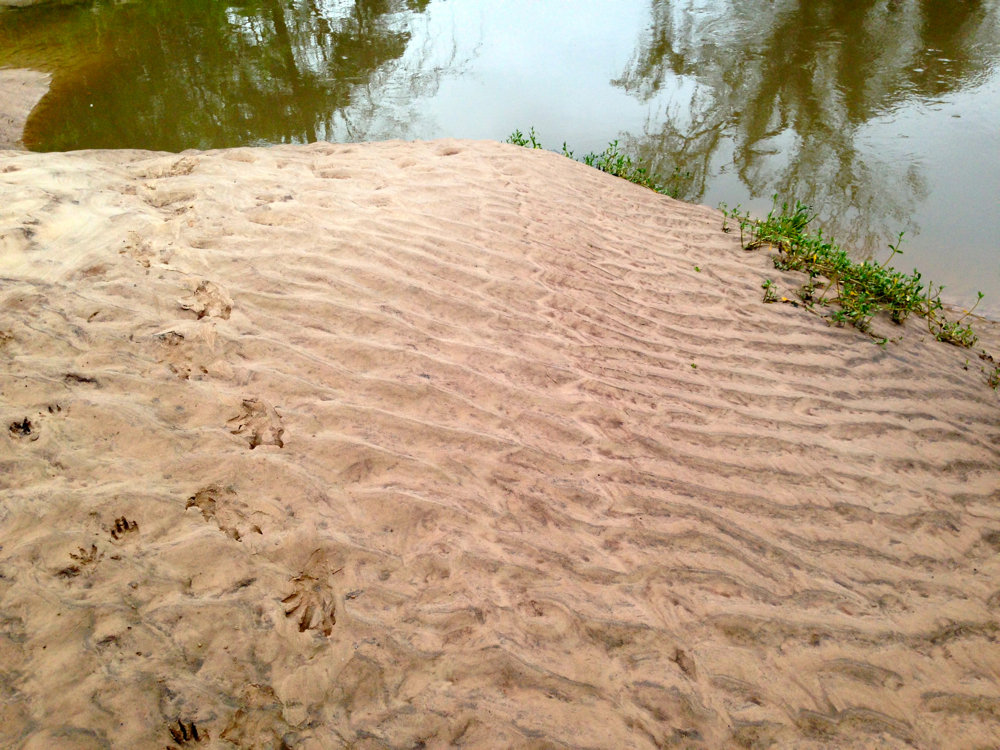 Wildlife tracks in the sand on Buffalo Bayou in Memorial Park at Woodway, March 2016.

No Definite Planting Plan and No Permit Yet

The district’s Vegetation Advisory Workgroup began meeting over a year ago and apparently has finished its work. The video was posted on the district’s website in April, said Krahn of the flood control district in a recent email. Asked for a copy of the planting plan and list of plants to be used, Krahn wrote that the plan was still being finalized and would be posted eventually on the district’s website.

The Galveston District of the Army Corps of Engineers has yet to make a decision on a permit for the project. Given popular opposition to a costly, contradictory plan that lacks any scientific basis and causes considerable environmental harm for no obvious benefit, under the National Environmental Policy Act, the Corps would likely have to require an environmental assessment and impact statement, according to our experts. During two public comment periods in May-June of 2014 and May of 2015, several hundred comments opposing the project (the Corps counted a petition signed by 2,656 people as one comment)—vastly outnumbering proponents—requested an environmental impact statement, which could cost the county a couple of million dollars. Too much public money has been spent on this pointless, counterproductive project already.

Here is how you can let the flood control district know what you think about the Memorial Park Demonstration Project.

And please consider making a donation to Save Buffalo Bayou so that we can continue our fight for the life of Buffalo Bayou, for working with nature rather than against it on all our streams. It’s cheaper, more cost effective, and more beneficial for us all.

“Nature has introduced great variety into the landscape, but man has displayed a passion for simplifying it. Thus he undoes the built-in checks and balances by which nature holds the species within bounds.”
― Rachel Carson, Silent Spring