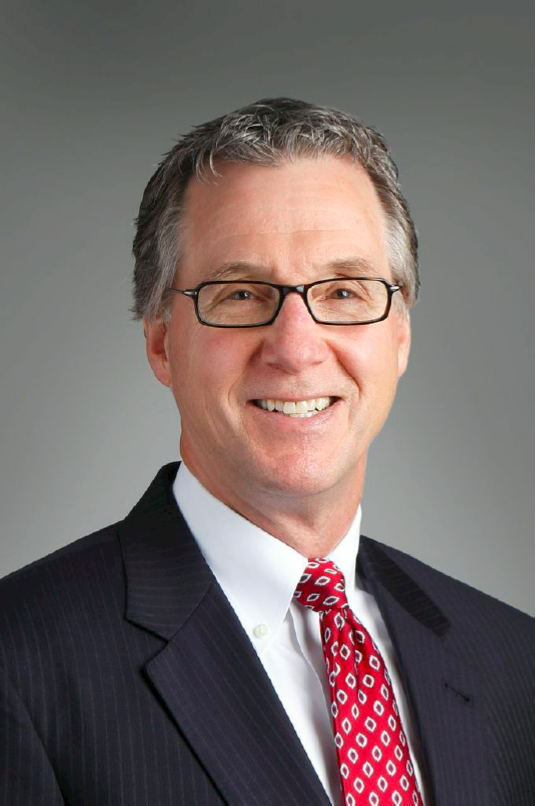 We know that Houston has a flooding problem, and that flood damages are increasing, despite the hundreds of millions if not billions of federal, county, and city tax dollars being spent on flood control and drainage.

According to a May 18, 2016, report from the Associated Press, since 1998 the Federal Emergency Management Agency (FEMA) has paid more than $3 billion in today’s dollars for flood losses in metropolitan Houston. Altogether since the late 1970s FEMA has paid more for flood damage to Harris County than to any place in the country outside New Orleans and two Louisiana parishes struck by Hurricane Katrina. (Critics complain the federal agency’s flood insurance program is unjustifiable and financially unsustainable.)

The year 2015 appears to be the second most costly year, after Tropical Storm Allison in 2001, in terms of federal funds paid to renters and owners of homes and businesses in Harris County for flood damage. (Figures for comparison include only local storms between 1978 and 2010, though between 2010 until 2015 storms were relatively minor.) As of November 30, 2015, the federal government had paid about $333 million for 6,354 claims under the National Flood Insurance Program in 2015. (See page 18.)

But 2016 may turn out to be more costly. FEMA received more than 8,000 claims from the April 2016 Tax Day flooding, according to the Associated Press. A more recent Houston Chronicle article reported that the latest estimates submitted to the Texas Department of Public Safety from Harris County indicate more than 11,200 homes were affected by spring storms, with more than $44 million in damage to public infrastructure. Not to mention the tens of thousands of cars damaged by flooding.

And how much has been spent on flood control projects?

Since 1998 through Fiscal Year 2016, Congress has appropriated $702.737 million in federal funds for flood control projects on Brays, Hunting, White Oak, Sims, Clear Creek, and Greens bayous in Harris County. (See pages 48-50.) These figures do not include sums such as the $72 million appropriated for repair of the Barker and Addicks dams on Buffalo Bayou.

In Fiscal Year 2015 the overall budget for the Harris County Flood Control District was $66 million for maintenance and operations and $158 million for Capital Improvement Projects, a total of $224 million, which includes some federal funds. The District’s FY 2016-17 Capital Improvement budget is $66 million. The flood control district employs 341 full-time employees. (See page 8.)

So What Is Our Flooding Problem?

Good question, and one that is being asked all over the country. It appears that little research has been done on the subject. But as a result of legislation authored by Illinois Senator Dick Durbin and Rep. Mike Quigley, FEMA will now be conducting a national study on urban flooding. This was prompted by a study in Illinois that found that 92 percent of Illinois flooding was occurring outside of mapped floodplains.

Similarly, in Houston, during the Memorial Day 2015 flooding, for instance, over one-third of the 10,250 houses that reported flood damage were outside any mapped floodplain or known flood hazard area, according to a report from the Harris County Flood Control District at the Spring 2016 conference of the Texas Association of Floodplain Managers. (See graph on page 9 and below.)

Maybe Houston needs to do its own study? That’s what the city of Pensacola, Florida, did after catastrophic flooding in 2014, according to a report from Dave Fehling on Houston Public Media. Pensacola set up a commission, a joint city-county Storm Water Advisory Team, that held public meetings and came up with specific, practical recommendations.

Flooding outside of flood hazard areas would seem to be a drainage problem. Runoff, impervious surface, detention, ponding, subsidence, blocked drains, poor maintenance, pipes too small, pipes broken, streets too low, too many roads, highways, and parking lots; houses, apartments, buildings built in the wrong place or what has become the wrong place; not enough rain-absorbing, cleansing, and deflecting trees and vegetation, etc. Drainage is the responsibility of the City of Houston, not Harris County or the federal government.

Drainage problems are one of the three types of urban flooding threats listed by Costello in his talks and panel discussions, and drainage is the issue that he is focusing on, he says. “A lot of houses throughout the city flooded from poor drainage infrastructure,” said Costello.

The other two flooding threats, as described by Costello, are riverine (overflowing streams) and tropical events like hurricanes. The Harris County Flood Control District, often working with and funded in part through the US Army Corps of Engineers, is responsible for dealing with riverine flooding.

Then there are the engineering failures, not mentioned by Costello. After the flooding last year and this spring, Facebook was filled with complaints from people in Meyerland and other Brays Bayou communities about recent Rebuild Houston improvement projects that seemed to have caused their houses to flood as well as recently built detention basins that overflowed and flooded their neighborhoods or that didn’t fill at all. And virtually everyone seems to agree, including the mayor’s transition team on Rebuild Houston (see below), that lowering city streets, part of the Rebuild program, was a bad idea.

There are also badly built bridges that cause rushing floodwater to back up. A bridge over Buffalo Bayou downtown was a major cause of the catastrophic flooding of downtown Houston in 1935 that led to the creation of the flood control district. The flood control district’s controversial and much-delayed project known as Project Brays is replacing or modifying 30 bridges on Brays Bayou.

Another problem: an alleged lack of enforcement of runoff regulations against developers. “We as an agency don’t do a good job of making sure it’s done right,” said Costello.

Costello was both an obvious and controversial choice for flood resiliency czar.

Founder of Costello Engineering in 1991, Costello is viewed by some as an agent of developers responsible for contributing to flooding problems. His choice signaled that the city’s solutions for flooding might be geared toward costly “gray” engineering and construction programs, including digging out and widening bayous and streams, which is what was recommended by the mayor’s transition report on Rebuild Houston (see page 17), a report authored predominantly by engineers. (Bayous and streams are the responsibility of the flood control district and the Corps of Engineers. Their current practice locally is to dig out and widen bayous and streams.)

And in fact, Costello did emphasize gray solutions, talking about “the need to get water to the streams as quickly as possible” which requires bigger drainage pipes and of course, bigger streams to receive the faster and bigger flow of storm water through bigger pipes, more water flowing faster downstream.

“I hope you’re going to focus on better detention before digging out and widening our bayous,” commented a woman at the Briar Forest meeting.

“Oh, yes,” Costello assured her. But “we can’t put detention everywhere,” he said. “We don’t have the land.”

But there is no doubt that Costello brings knowledge and experience to the job of flood resiliency chief.

Costello Engineering continues to receive drainage construction contracts from Harris County. But Costello, who chaired the city council’s Flooding and Drainage Committee and was a member of the mayor’s transition team reporting on Public Works and Engineering, sold his interest in the company at the end of 2014 when he ran for mayor, and resigned as president in 2015, though he is still on the board.

Faster or Slower or Both?

There would appear to be a conflict, or at least tension, between some competing and seemingly opposite solutions to urban flooding. Speeding up storm water flow with bigger pipes and bigger and deeper creeks, ditches, and bayous (which seems sort of like the endless and fruitless building of bigger highways for more cars) can overwhelm systems and waterways and send flooding problems downstream. Slowing storm water, temporarily detaining it in detention basins, spreading it out with rougher, more pervious surface, trees and vegetation, can cause flooding in place.

A third way is to raise buildings (current practice) or buyout chronically flood-prone properties and create riparian parklands or open space to allow waterways to overflow and slow down, also allowing the streams to perform their natural, necessary, and legally protected function of cleansing the water, as well as providing wildlife habitat.

However, buyouts are expensive and remove property from the property tax roles. That makes budget-minded officials reluctant to do buyouts. About one-half of the city’s general fund revenue comes from property taxes, which are limited by the city’s revenue cap.

One of Costello’s solutions is to develop response teams to inspect where flooding is happening. These teams might be composed of emergency personnel and staff from Community Development, a contractor, a Public Works and Engineering person, he said. “They would determine the best way to react to some of these situations.”

Said Costello, “Each area has a different reason why it’s flooding.” 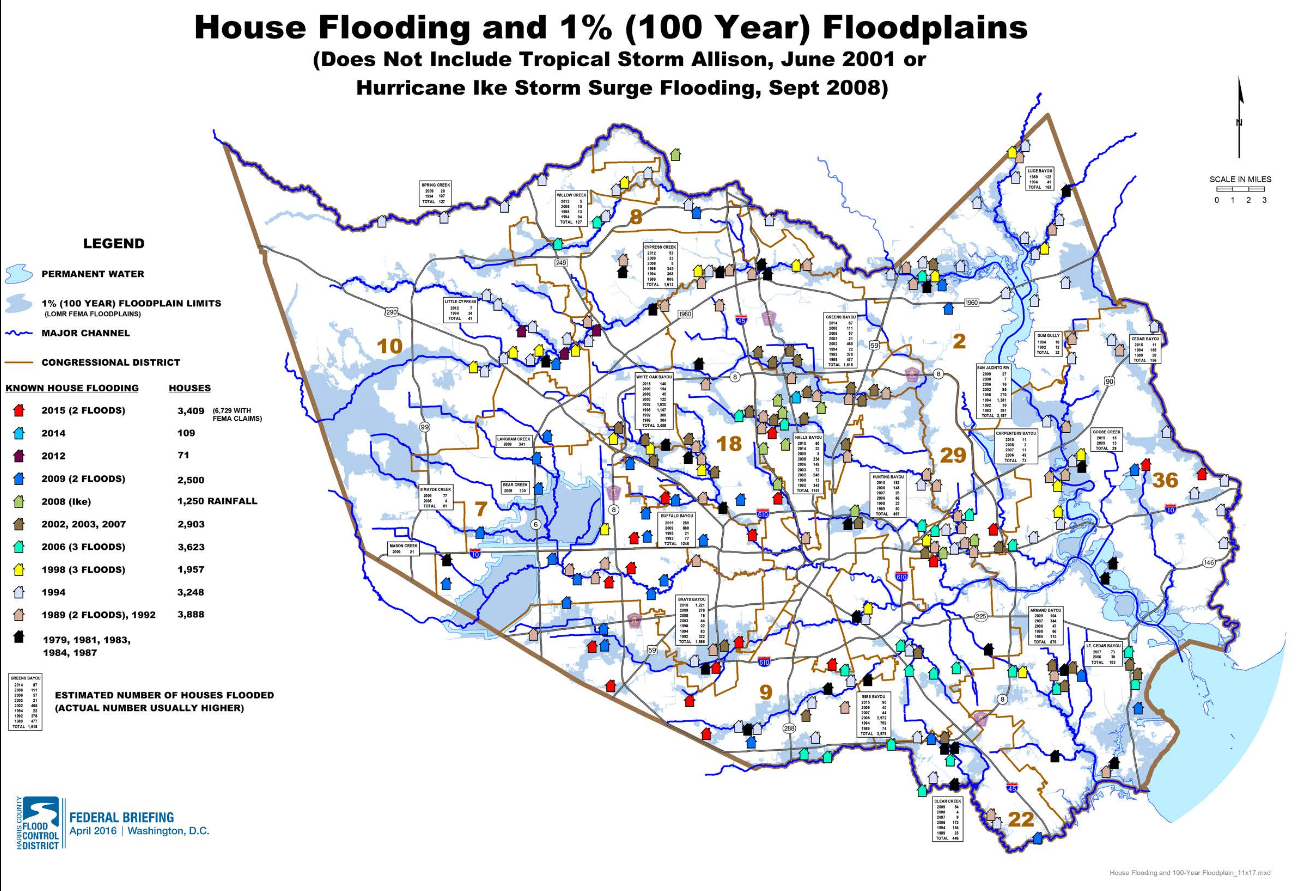 House flooding in Harris County during major storms since 1979, not including Tropical Storm Allison in 2001 or Hurricane Ike in 2008. Actual figures could be higher. Image from the Harris County Flood Control District federal briefing on Project Brays, April 2016.

8 thoughts on “The Flood Czar Answers His Own Phone”