High Flows in Harris County Streams Increasing Most in Texas

Study Questions Use of Dams and Urges Focus on Causes, Not Symptoms, of Flooding

An “incredible” 70 percent of stream gauges in Harris County show significant increases in peak flow – as much as 6,400 percent in one case — since the beginning of record keeping by the US Geological Survey.

More streams in Harris County are increasingly flowing higher than in any other part of the state, according to a study recently published in the March 2018 issue of the Texas Water Journal, a publication of the Texas Water Resources Institute.

Three stream gauges on Buffalo Bayou have shown the greatest increase in peak flows since the federal dams were built in the 1940s to reduce flooding on the bayou, according to the report.

Significantly, two major streams, Langham and Bear creeks, feeding into one of these dams — the overburdened Addicks Reservoir — showed some of the largest upward trends in peak flow. The record amount of runoff flowing into Addicks during Hurricane Harvey was a major factor in the unprecedented decision to open the floodgates on both dams during the storm in order to prevent the dams from overtopping. Thousands of homes both below and behind the dams were flooded, and three people died.

The area in western Harris County above and behind Addicks Reservoir is experiencing some of the greatest development pressure in the region, particularly since the construction of the Grand Parkway (Highway 99). Buildings, paved surface, and other hard structures, including pipes, associated with development cause more and faster and more polluted rain runoff into streams, leading to flooding.

“An Overreliance on Flood Storage Reservoirs”

The report noted “the difficulty of maintaining lower peak flows below a reservoir when the inflows to the reservoir exhibit extraordinary increases year over year.”

“It is much easier for impoundments to store flood flows when these flows are not rapidly increasing on an annual basis. Thus, relying on large impoundment projects alone likely will not achieve success and again points back to our central emphasis of identifying causes, not just symptoms [of flooding].”

The USGS gauge on Greens Bayou at Cutten Road in northwest Harris County experienced the greatest increase in peak flow – 6,400 percent over a period of several decades.

Harris County Commissioners Court will meet Tuesday, March 27, to discuss flood management strategies and a possible bond referendum to pay for them. Also on the agenda is a proposal to study the feasibility of digging massive tunnels to drain stormwater from western Harris County into Galveston Bay. The contract to be negotiated is with Fugro USA Land, Inc.

The commissioners’ meeting begins at 10 a.m. on the ninth floor of 1001 Preston in downtown Houston. Those who wish to speak can sign up before the meeting here. 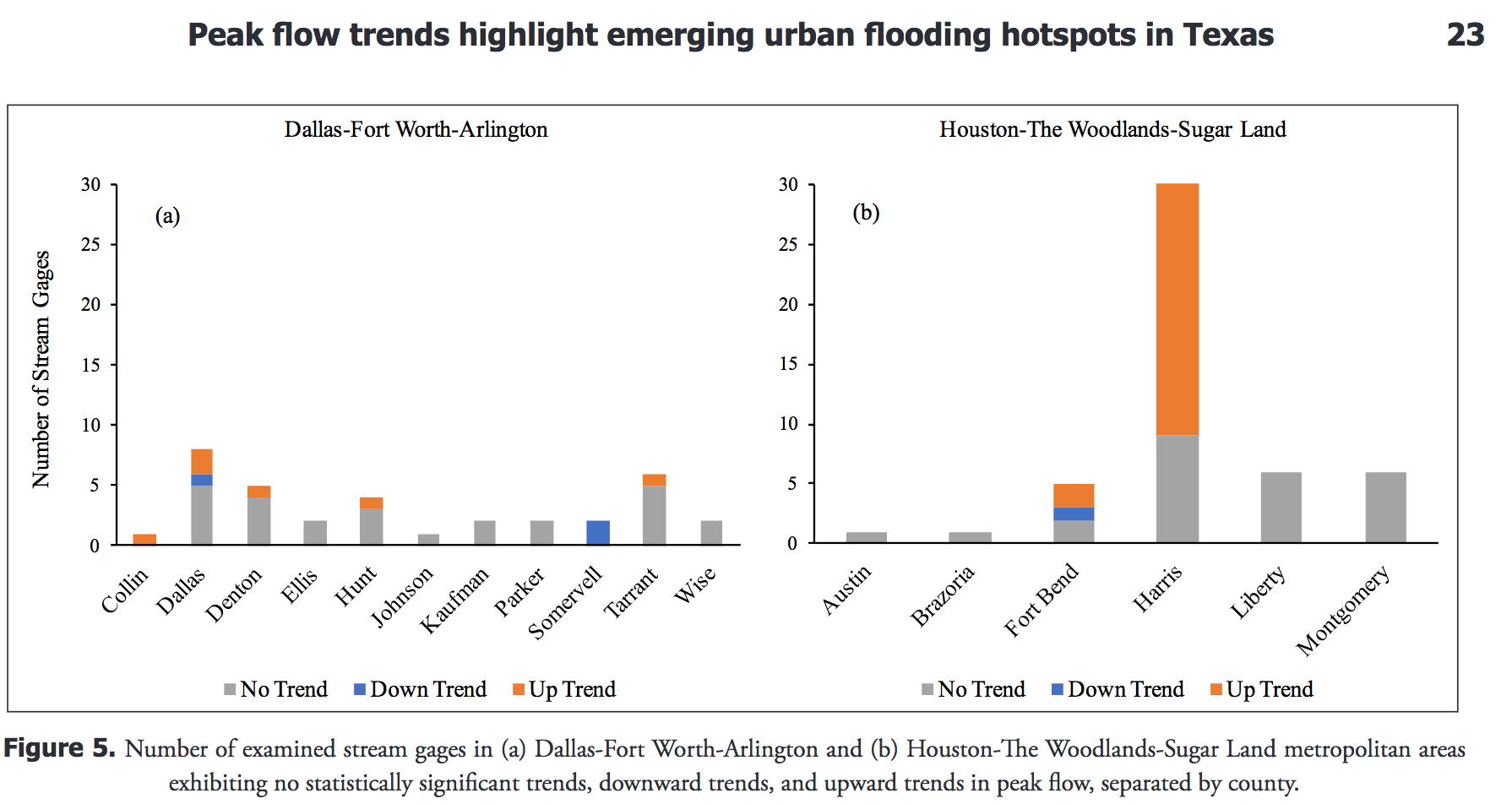 
Standard by Save Buffalo Bayou 5 years ago 2 Comments Uncategorized