The Mayor supports “prioritizing natural infrastructure.” So tell her to drop the plan to bulldoze 14 acres of riparian forest in the middle of our city.

Mayor Annise Parker was in the national news this weekend with a resolution “Prioritizing Natural Infrastructure” at the US Conference of Mayors in Dallas.

Let the mayor know you support this wise resolution and urge her to honor it by withdrawing from Harris County’s unwise plan to bulldoze hundreds of trees, vegetation, and habitat from the wild banks of Buffalo Bayou in and around our public Memorial Park. 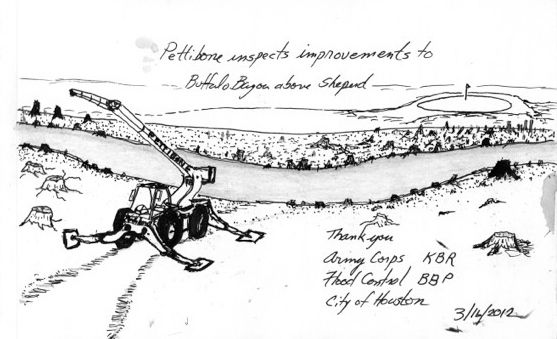 Pettibone inspects the “restoration” of the wild banks of Buffalo Bayou. Drawing by Kirk Farris.

Perhaps the mayor doesn’t realize that the plan she and the city council voted to spend $2 million of taxpayer money on will strip the tree cover from some 14 acres in and around our great public park in the middle of the city. This tree cover is riparian forest, an extraordinarily rare treasure in the center of one of the nation’s largest cities, and its natural function is to absorb carbon dioxide from the air, filter pollutants from the water, protect the banks from erosion, trap sediment, slow storm waters, shade the bayou, and provide wildlife habitat.

It’s not too late to stop this horrible project, called the Memorial Park Demonstration Project and dishonestly billed as a “restoration” project. The Army Corps of Engineers is currently considering Harris County’s application for a permit to start clearing the forest and the public has only until June 30 to make comments.

But we can pressure our mayor and city council members and let them know that we have lost enough trees and nature in our city and in Memorial Park. We oppose this pointless project to destroy our Buffalo Bayou so that they can “restore” it.

One thought on “The Mayor supports “prioritizing natural infrastructure.” So tell her to drop the plan to bulldoze 14 acres of riparian forest in the middle of our city.”


Standard by Save Buffalo Bayou 9 years ago 1 Comment Uncategorized