The purpose of destroying forest to dig out detention basins next to Buffalo Bayou in west Houston is to allow the City of Houston to drain more water from city streets into the bayou sometime in the future. This is the so-called “no-rise” requirement enforced by the Federal Emergency Management Agency (FEMA). To protect us from increased flood risk, FEMA requires that the City and everyone else prove that development within designated floodplains does not add to the flow in the bayou.

“We think there are advantages for the future when comes to drainage,” said Lopez.

Currently the City has no plans to drain more stormwater into the bayou, said Tommy Artz of the City of Houston Public Works Department’s Interagency Coordination Section. But the City has already paid $1 million to Flood Control to purchase some 30 acre-feet of the planned stormwater detention for future projects, said Artz

Some residents in neighborhoods near large commercial districts and Interstate 10 on the north side of the bayou are pushing for more drainage into the bayou. A representative of their neighborhood coalition declined to comment.

Artz explained that it was cheaper to purchase the detention from Flood Control than to buy land to build and maintain detention basins or install large underground culverts for temporarily holding stormwater. He described the purchase as a “bargain.”

Lopez explained that the flood control district already owns the land next to the bayou in Terry Hershey Park and has always planned to use it for flood management projects.

He said he believed that the agency planned to try to leave trees on the banks. “Trees help us prevent erosion,” he said.

Flood Control is planning three initial basins on the south bank of the bayou between North Eldridge Parkway and Dairy Ashford Road. Construction is to begin within weeks. The basins will briefly hold about 90 acre-feet of overflow from the bayou when it floods before allowing it to drain back into the bayou.

The district has already spent millions on the south bank linear detention basin project in the past decade, including paying various engineering firms for vegetation surveys and design. Lecon, Inc. has the $1.8 million contract to construct the initial three basins. 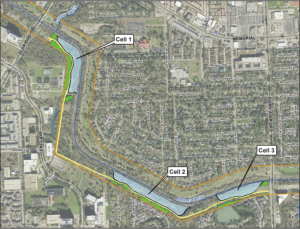 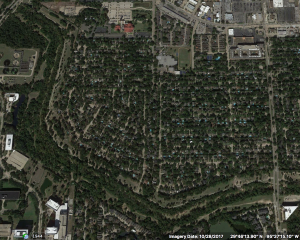 Area of proposed basins on wooded south bank of Terry Hershey Park on Oct. 28, 2017. Green space on north bank is grassy park with white line of sidewalk where trees were removed for detention decades ago. Buffalo Bayou is thin gray-green line between trees.

Decimation of Our Urban Forests

The tree removal project comes at a time when Houston’s remaining urban forests are being decimated. Hundreds of trees have already been felled in Memorial Park, our once-great public forest in the middle of the city, as part of a $200-300 million landscape plan for the park. Hundreds more, including towering pines, are already tagged for removal to make way for an artificial land bridge over Memorial Drive. More trees are being felled for the $13.5 million remake of the park’s popular public golf course into a professional tournament course, the plans for which city officials refuse to reveal. And then there are the numerous big trees that will be cleared in order to plant a monoculture of young pines in rigid rows on the west side of the park – a planned memorial to those who died in World War I. Planting a single species of trees in regimented rows, however, is a prime example of the wrong thing to do in the midst of an alarming loss of the biodiversity that supports life. Also it’s ugly and unnatural. 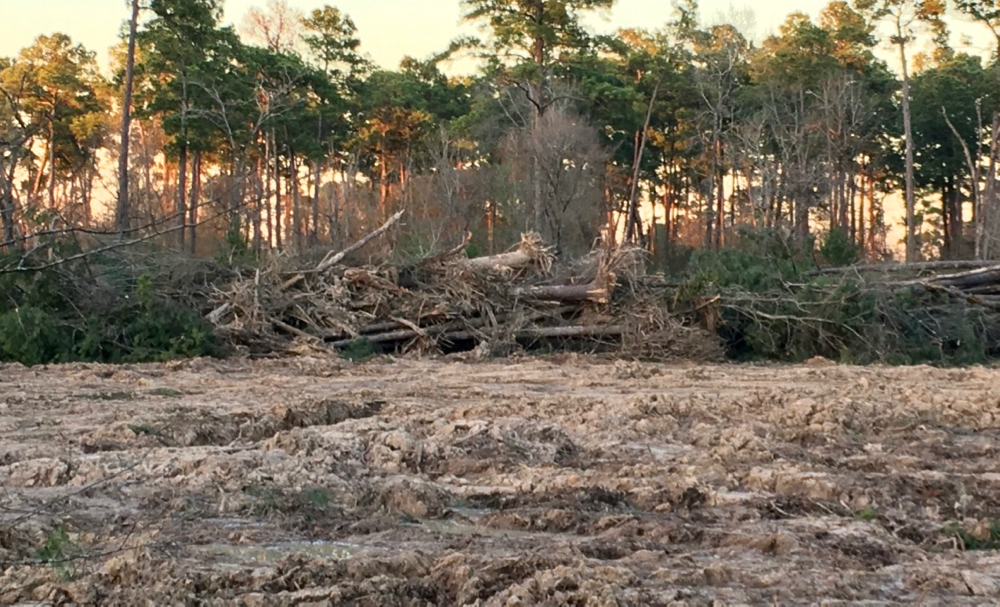 Mature pines recently felled in the forest of Memorial Park north of Memorial Drive are only a few of the hundreds of trees being removed as part of the $200-300 million landscaping plan. Photo by SC Jan. 24, 2019

Years ago the Harris County Flood Control District, in collaboration with the Buffalo Bayou Partnership, stripped trees and scraped vegetation from the banks of Buffalo Bayou in Buffalo Bayou Park downstream from the Shepherd Bridge. The result has been a disaster, with continuous costly repairs to collapsing banks and sidewalks.

The flood control district continues its decades-long practice of cutting and bulldozing trees on streams, oftentimes merely to provide access for bulldozers and other heavy equipment to the bank. Most recently, for example, Save Buffalo Bayou documented piles of large trees felled by the district’s contractor along Langham Creek in Addicks Reservoir. (See photo below.)

The district is legally responsible for the “conservation of forests” according to its 1937 founding charter. (P. 1) 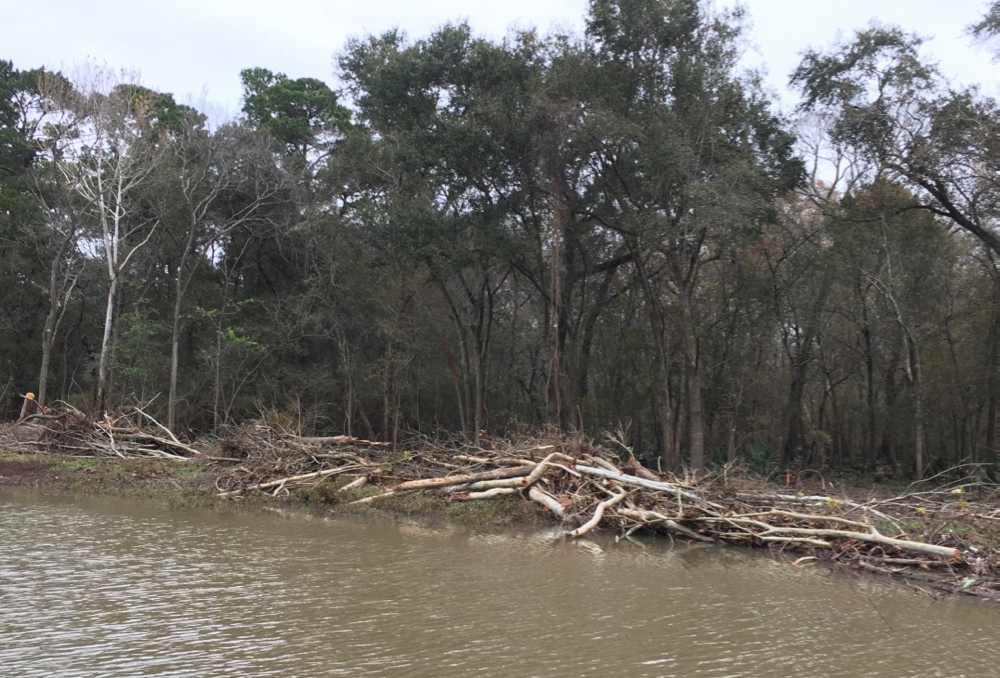 In the wake of Hurricane Harvey, the Harris County Flood Control District revived a controversial plan to capture flow out of the bayou with a series of shallow basins on the forested south bank of the stream in Terry Hershey Park. Residents, conservationists, and others, banding together as Save Our Forest, have been fighting to preserve the trees on the south bank since at least 2010. However, many of those forest activists were among the thousands who flooded on upper Buffalo Bayou during Harvey. With homes destroyed and health damaged, their ability to oppose the project has been weakened.

“I feel like they are pushing this thing now when they know people are too distracted to resist them,” said one distraught resident.

Terry Hershey Park, run by Harris County Precinct 3, occupies about 500 acres of land along some six miles of bayou that the district purchased from the federal government in the Sixties. The federal government had stripped, straightened, and shortened the bayou there below the two federal flood control dams, Addicks and Barker, during the late Forties. Straightening—channelizing—the bayou essentially reduced its capacity, rendering future residents more vulnerable to flooding, besides damaging its essential functions. Channelizing streams for reducing flood risk has been largely abandoned by the federal government and agencies elsewhere because it actually increases flooding, among other problems.

Modern stormwater management emphasizes stopping, slowing, and absorbing stormwater before it floods a stream, not after. (See Freitag, et al.)

Allow Bayou to Increase Capacity Naturally and For Free

The straightened bayou in Terry Hershey Park, like all rivers and streams, continues to try to restore its natural bends or meanders and recover its former length and capacity. Allowing it to do so would in fact probably be the easiest and cheapest stormwater management project. Restoring meanders to channelized streams is modern practice. “Restoring meanders to rivers that have been straightened … increases the in-stream storage capacity and slows the downstream propagation of the flood peak, thereby decreasing downstream flood risk …,” reports the nonprofit International Rivers.  (p. 11)

The park is named for legendary environmentalist Terry Hershey, who in the Sixties and Seventies organized landowners, conservationists, garden club members, and influential politicians, among many others, to protect Buffalo Bayou from being stripped, straightened, and covered in concrete.

Learn more about Houston and trees from the City of Houston’s Office of Sustainability.