How to Walk There

Update 2020: The Memorial Park Conservancy has put up fences and signs warning of the closure of a popular unofficial trail through the woods along Buffalo Bayou below the south Picnic Loop. Let the Conservancy know that you are opposed to this.

Update 2021: The Memorial Park Conservancy is now studying a plan to “stabilize” the natural banks and channelize Buffalo Bayou in the Old Archery Range west of Loop 610. Let the Conservancy know you are opposed to the destruction of these historic banks.

An argument that was often made in support of bulldozing the wild banks of Buffalo Bayou in Memorial Park is that the area is not accessible. One response to that argument is if a rare and valuable natural area is destroyed in order to create access, what then would the people have access to?

But the fact is that the riparian forest on the banks of Buffalo Bayou in Memorial Park as well as in the Arboretum is laced with official and unofficial hiking, running, and biking trails.

Some areas with deep gullies and ravines are suffering from severe erosion due to uncontrolled runoff from the park and heavy use by hikers and mountain bikers, so be prepared for that. And be alert, because some of these steep, winding dirt paths are used simultaneously by hikers, runners, and mountain bikers. 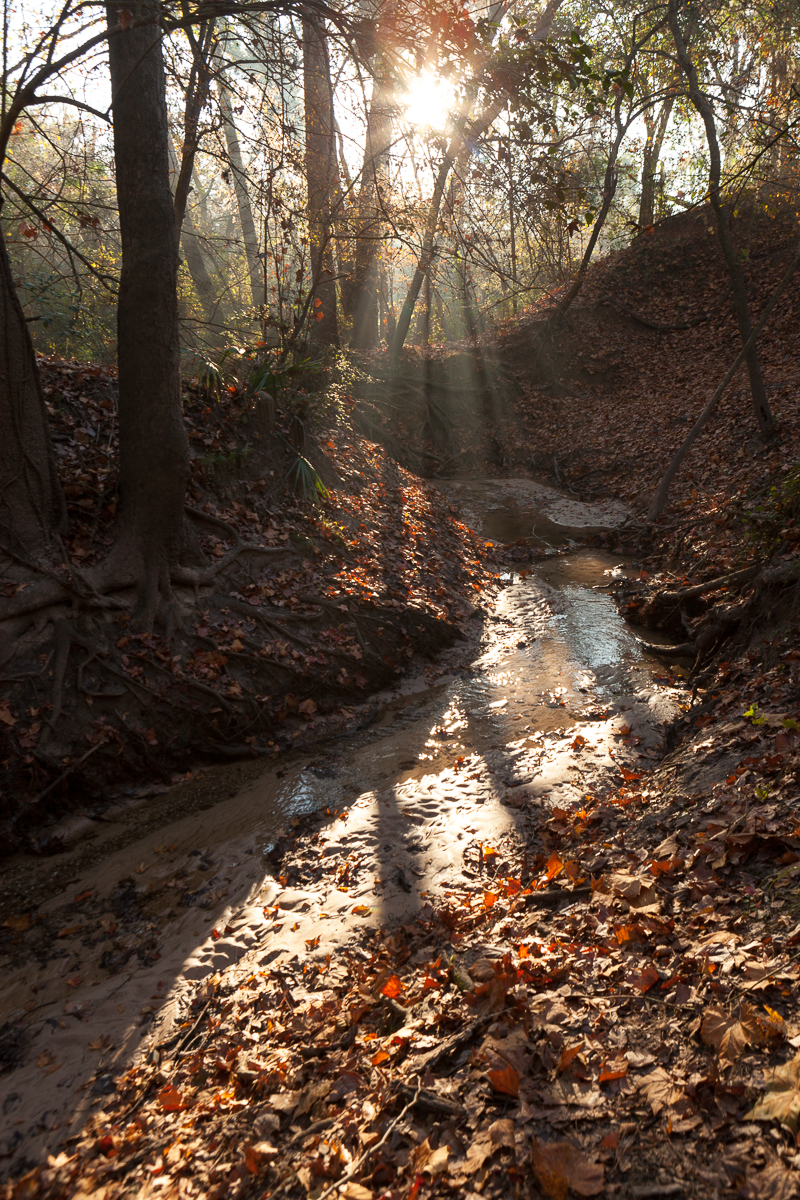 A tributary of Buffalo Bayou in the Memorial Park woods. Photo by Jim Olive

But the experience of the woods is restorative, the streams enchanting, and the views of the bayou are lovely. You can see jumping fish, herons and hawks, the tracks of bobcats, coyotes, and beaver in the sand. You’d be lucky to see an alligator, and let us know if you see one because we’ve heard of no sightings in this area in recent years since the famous big guy (or was it a hungry gal or both?) was removed from the beach farther downstream at the Rainbow Lodge.

To see the area that was targeted for destruction by the Harris County Flood Control District, start from the south-easternmost parking spot on the South Picnic Loop. Enter the woods and follow the trail to the right around the gulley for about fifty yards. When you get near the bayou, take a left and walk towards a steep sand bank. On the opposite bank is the upstream limit of the River Oaks Country Club golf course, marked by a picket fence on the terrace below the steep cliff. This and other high cliffs were recently relatively stable and in better shape before the club killed off the vegetation and began running bulldozers over the ground installing the newly designed golf course. (During the summer of 2015 the club armored this bank with concrete riprap, along with another high bank near the downstream end of the golf course that the club had also stripped of vegetation.) The entire south bank—half of of the project area–is owned by the club, which is paying one-third of the $6 million cost. (Update 2019: The Club has since razed, bulldozed, and armored with concrete and sheet pile the south bank in three places.)

You can back track and follow the footpath through the woods downstream (eastward), entering and crossing a lovely tributary that will be dammed by the proposed “restoration” project. Plenty of vantage points for looking out over the bayou and places to descend to sit on the shore. Note that the trees and brush downed by the 2015 Memorial Day flood are performing an important function: trapping sediment to naturally rebuild stronger and more stable banks.

Like other west-east flowing streams in the Houston region, Buffalo Bayou is notable for its high bluffs, something that early visitors to the new town of Houston described in the nineteenth century.   The eastern park boundary is a high cliff just east of another tributary and what we call the middle meander—a wide sandy beach southeast from the maintenance facility, off the Green Ridge trail, and deeper into the woods beyond a concrete cistern covered with graffiti. The cistern and other concrete ruins in the park are the remnants of Camp Logan, a World War I military training camp. The flood control project will obliterate these many-thousand-year-old cliffs, and the bayou here will be filled and rerouted further south.

From here the north bank of the project is private homes, although the sandy banks themselves are owned by the Harris County Flood Control District and thus public property. Around a sharp point and with the recently armored south bank of the country club opposite, the north bank is part of the Hogg Bird Sanctuary, a city-owned public park, although there are private homes behind it. Soon you reach yet another tributary and the cliffs of the bird sanctuary. This area, once accessible by a footpath from the Bayou Bend parking lot off Westcott Street, suffered some severe slumping during and after the 2015 Memorial Day flood. These cliffs and tributary were to be obliterated by the project, but oddly the flooding bayou preempted the plan, re-engineered the steep cliffs into more more gently sloping banks, and left the downed trees and brush to gather sediment and rebuild and stabilize the banks naturally. And by the way, we have reliable eyewitnesses who grew up in the neighborhood and who say that the large tree trunk lying across the tributary, which like so many trees in the bayou looks recently fallen, has been lying there for at least thirty years. And it’s still there even after the Memorial Day flood.

The end of the River Oaks Country Club golf course, visible through the trees and bushes of these steep, very old cliffs, marks the downstream limit of the project.

3 thoughts on “How to Walk There”