The Harris County Flood Control District has applied for a permit to bulldoze most of the riparian forest and vegetation along both banks of more a mile of the last remaining stretch of natural Buffalo Bayou in the city. This is our bayou as it passes by Memorial Park. Also targeted are the tributary and high bluffs of the Hogg Bird Sanctuary, as well as other ancient cliffs and prehistoric sandstone used in the past as water crossings by buffalo and people.

The project would excavate, fill, grade, and artificially rebuild the banks; dredge, deepen, and reroute the bayou channel, damming tributaries. Hundreds of trees will be cut down, many of them riparian species too small or too young to be counted by the district’s inappropriate tree survey. The shading tree canopy will be removed (project proponents claim there is no tree canopy!); the water temperature increased. The soil, packed with protective, binding roots small and large, will be dug up, tossed around, and compacted by heavy equipment. Wetlands and lovely sandy beaches will be obliterated along with the colonizing and stabilizing plants that have taken root there, a crucial stage of the natural process of building the riparian buffer so important to water quality, flood and erosion control.

The Corps will now “review and evaluate those responses, request clarification if needed, request additional information if needed, etc.,” wrote Dwayne Johnson, regulatory project manager for the Galveston District of the Corps, in an email. “This is part of the permit evaluation process and very difficult to predict timelines.”

The Corps received almost 350 comments on this controversial project, including comments from seven governmental agencies. The vast majority of the comments—some 286—were opposed. (The MoveOn petition with more than 2,500 signatures was counted as one comment opposing the project.) Many of the comments on both sides were form letters but there were also critical questions asked by knowledgeable people, including the Texas Commission on Environmental Quality. Save Buffalo Bayou requested and received copies of all the comments through the Freedom of Information Act, and we will be reporting more on that.

What Needs to Happen 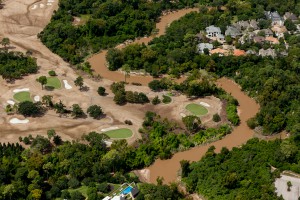 While the public comment period to the Corps has closed, we can still make comments to the Corps. The importance of doing that is that the comments become part of the administrative record and can be used in a legal challenge to the permit should it be approved. So it’s best to make comments that relate to destruction of the riparian zone, to false claims of improved water quality, ecology, and wildlife habitat and of reduction of sediment, bacteria, and erosion, and to the impact of dredging and filling on all of the above.

And yes, we are preparing a legal challenge to the permit should it be approved. Please consider making a donation to Save Buffalo Bayou. The bayou needs your help.

The Texas Commission on Environmental Quality must certify that any permit approved by the Army Corps of Engineers does not violate Texas Surface Water Quality Standards. If the state denies certification, the federal permit is also denied. This is why we all sent copies of our comments to the TECQ as well and asked them for a public hearing on the project.

We should continue to send our objections to the TCEQ. The commission rarely holds public hearings, but they do at the request of a commissioner. Here is how to contact the commissioners. Let them know that this project will adversely impact water quality by destroying the riparian buffer and destabilizing the banks, and they should refuse to certify it.

In addition the Texas Department of Parks and Wildlife is required to hold a public hearing on the permit to determine whether this project is a legal use of public parkland. The TPWD must determine “that there is no feasible and prudent alternative to the use or taking of such land” and that “the program or project includes all reasonable planning to minimize harm to the land, as a park, recreation area, scientific area, wildlife refuge, or historic site, resulting from the use or taking.”

So make your preference known to the Texas Parks and Wildlife commissioners as well as the director. Here is how to do that.

However, it seems that the Houston city council is the governing body that must eventually vote on whether the highly destructive and expensive project is a legal use and taking of public parkland. So your city council members and the mayor need to hear from you also. The city council already voted to spend $2 million on the $6 million project, with Harris County and the River Oaks Country Club contributing another $2 million each. Critics, however, expect the wasteful project to cost far more than $6 million, and the taxpayers will be forced to pick up the tab after the contractors have bulldozed the banks. Of far greater expense will be trying to repair the damage after the project washes out. The cost of repairing the banks that washed out after the Houston Country Club’s failed erosion control project on their golf course is said to be at least $10 million.

Contacting Your Other Political Representatives

Your congressional representatives can let the Army Corps of Engineers know that they don’t care to have this project happen. So continue to contact Reps. John  Culberson and Ted Poe about it.

Your Harris County commissioners need to hear from you, especially Precinct 4 Commissioner Jack Cagle, whose district includes Memorial Park. Cagle, though he voted for the project, is a nature lover, enjoys kayaking on Houston’s beautiful bayous and creeks,  and is proud of his work to preserve these natural areas. He may be inclined to help protect our wild Buffalo Bayou.

And again, please remember to make a donation to Save Buffalo Bayou so that we can continue to fight for the life of the bayou.