Proposals for a new master plan for Memorial Park will be presented at a public meeting on Wednesday, Sept. 17, from 6 to 8 p.m. at the Eldorado Ballroom, 2310 Elgin Street. Anyone concerned about the future of our great Memorial Park and Buffalo Bayou as it flows past the park will want to attend this meeting, one of four “update” meetings scheduled about the plan over the next several months.

The prominent national landscape architecture firm of Nelson Byrd Woltz is leading development of the plan. Thomas Woltz, principal of the firm, and his team will share results of their research and analysis, as well as initial design concepts at the Wednesday meeting co-hosted by council members Dwight Boykins and Robert Gallegos.

Do Nothing to Our Wild Bayou is the Best Policy

The last master plan for Memorial Park in 2004 recommended that nothing be done to disturb the natural environment of Buffalo Bayou. After extensive analysis by a team of fluvial geomorphologists and hydraulic engineers, the plan wisely concluded that “the recommended course of action for the Bayou is simply to leave it alone and consider it a symbol of dynamic natural process. The Bayou can serve as a valuable environmental education tool that depicts the change inherent in nature.”

It is not yet known, to us at least, what recommendations the new master plan will make about our treasured last stretch of wild bayou in Houston. However, contradicting the clear conclusions of the 2004 master plan, the Memorial Park Conservancy officially and actively supports the Bayou Preservation Association‘s bizarre project to bulldoze the bayou’s riparian forest, level and grade the banks and cliffs, dredge, channelize, and reroute the bayou. This would forever destroy a valuable and historic natural resource in our great public park, an amazing oasis of riverine wilderness in the middle of the city.

The Army Corps of Engineers is currently considering whether to issue a permit to the Harris County Flood Control District for this misguided project, officially known as the Memorial Park Demonstration Project.

The Memorial Park Conservancy is a private, non-profit organization founded in 2000 as a successor to the advisory committee dedicated to preserving the park after the passing of Ima Hogg, whose family facilitated the creation of the park on the north bank of the bayou in 1924 as well as the establishment of the River Oaks Country Club and golf course on the south bank the same year. This fortuitous circumstance is the main reason why this lovely wild stretch of the bayou has never been channelized and has remained relatively undisturbed for at least ninety years.

The new master plan is an initiative of the Memorial Park Conservancy, the Houston Parks and Recreation Department, and the Uptown Houston TIRZ 16, a Galleria-area development zone that was enlarged in 2013 by vote of city council to include Memorial Park, the Arboretum, and the Hogg Bird Sanctuary. The Arboretum, which has its own board, is also in the process of developing its own master plan.

Property taxes from the Uptown zone that would have gone into city and school district treasuries go instead into the TIRZ 16 budget. In fiscal year 2013 the estimated value of the property in the zone was about $3 billion above the value of the property in the base year of 1999, generating over $31 million in property tax revenue for the TIRZ, according to the TIRZ 16 fiscal year 2014 budget.

The TIRZ 16 allocated $1.250 million in fiscal year 2014 for development of the Memorial Park master plan. A further $9 million has been allocated to the park and bayou for “equipment” in the fiscal years 2015 through 2017.

The 2004 Memorial Park master plan was developed by the landscape architecture firm of Wallace Roberts & Todd. Austin-based Design Workshop is developing the master plan for the Arboretum. 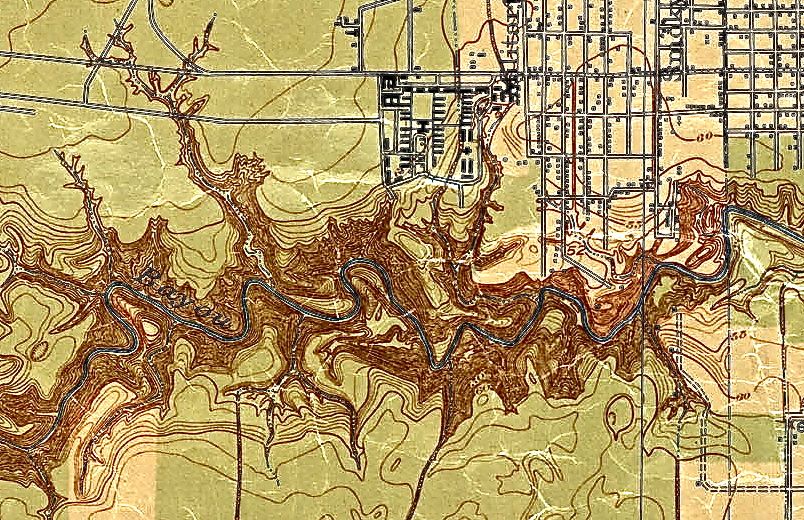 1922 USGS topographic map of Buffalo Bayou in the project area to be excavated, filled, and rechanneled. This was drawn just before the founding of Memorial Park on the north and the River Oaks Country Club on the south. Contour interval is one foot.