How We’ve Been Defending the Bayou Lately

What We’ve Been Doing

The Parks and Wildlife commissioners are the ultimate bosses of the state Department of Parks and Wildlife, which is charged with managing and conserving the natural and cultural resources of Texas. For that reason the department must hold a public hearing on the proposal to raze the riparian forest and bulldoze the wild banks of Buffalo Bayou in Memorial Park. Chapter 26 of the Texas Parks and Wildlife Code, which is titled “Protection of Public Parks and Recreation Areas,” says that no public land designated as a park or historic site may be taken or used for any other purpose unless 1) there is no feasible and prudent alternative and 2) the project “includes all reasonable planning to minimize harm to the land…”

At the commission meeting, prominent architectural historian Stephen Fox, author of several authoritative books on Houston, pointed out the “extraordinary value of the bayou-front landscape of Memorial Park, its vegetated clay bluffs, sandstone outcroppings, riparian forest buffer, and the distinctive landscape of spring-fed ravines that endows the southern sector of the park with a degree of topographic variation rare in the Gulf coastal plain.

“These natural resources—and the potential archeological resources embedded in this landscape—are threatened with a degree of disturbance that this sector of the park has never experienced because, ninety years ago, it was conveyed to the City of Houston for conservation and recreation purposes by the children of Governor James S. Hogg.”

Frank C. Smith, a prominent Houston conservationist and a founding member of the Bayou Preservation Association as well as the Memorial Park Conservancy, spoke of the impact that razing the riparian forest would have on the bayou, which is an official Parks and Wildlife Paddling Trail. “I canoed this bayou when I was twelve years old. I took my son canoeing on it when he was twelve years old. And I hope that he too will be able to take his son and grandson canoeing through this beautiful wild area when they are twelve.”

A.C. Conrad, speaking for Olive Hershey, read the resolution of the Hershey Foundation opposing the project, known as the Memorial Park Demonstration Project. The Hershey Foundation had long been a supporter of the Bayou Preservation Association until the BPA’s recent support for this project in violation of its founding purpose to preserve the natural beauty of the bayou.

Another speaker referred to the Parks and Wildlife Department’s Guidelines for Construction and Clearing Within Riparian Areas, which state that removal of vegetation along stream systems is usually very damaging, that streamside forests are complex ecosystems vital to the protection of our streams and rivers, and that channel modification projects destroy natural aquatic and riparian habitats by removing woody vegetation and altering a stream’s configuration and flow.

Later in the week we found that Commissioner Cagle, who represents Harris County Precinct 4, felt very strongly about preserving the riparian forest along Spring Creek, which also has sandy beaches and magnificent high bluffs similar to those found on Buffalo Bayou in the project area around Memorial Park. The bluffs along Spring and Cypress creeks are part of the same Meander Belt Ridges that form bluffs along Buffalo Bayou. (Spring Creek forms the border between Harris and Montgomery counties.)

A tall, powerfully built, jovial man, Cagle enthusiastically described the history of the Spanish explorers along Spring Creek and the existence of clear springs and cypress trees on top of one of the highest bluffs opposite the Jesse Jones Nature Center. The springs, Cagle related, are believed to be the springs of Santa Rosa and the location of villages of the tribe of Canos, an Orcoquisa tribe, one of the least known tribes of North America but mentioned by early Spanish explorers.

We were canoeing along the Spring Creek Greenway, the longest contiguous urban forested corridor in the nation, a corridor that will ultimately be thirty-three miles long. This amazing nature preserve is the result of the foresighted efforts of former Harris County Judge Jon Lindsay (1975 – 1995), the early cooperation of the Harris County Flood Control District, numerous landowners who donated land or placed their land in conservation easement, and of course financial donors. This enlightened project now has the support of Commissioner Cagle, who considers the Greenway a high priority, and the Bayou Land Conservancy, the Houston region’s leading conservation easement holder, protecting more than 10,000 acres of land.

We reminded Commissioner Cagle of the riparian forest and natural bayou we are trying to protect in and around Memorial Park. We also have history and archeological sites on our beautiful, wild bayou. Cagle voted for the project to bulldoze the wild banks of the bayou, but he agreed he would not want that to happen to his lovely Spring Creek.

“It’s not a done deal,” he reassured us with a smile.

Here’s how you can contact Commissioner Cagle and Harris County Judge Ed Emmett to ask them to cancel this misguided project to destroy our last, best, healthiest stretch of wild Buffalo Bayou in the middle of our city. 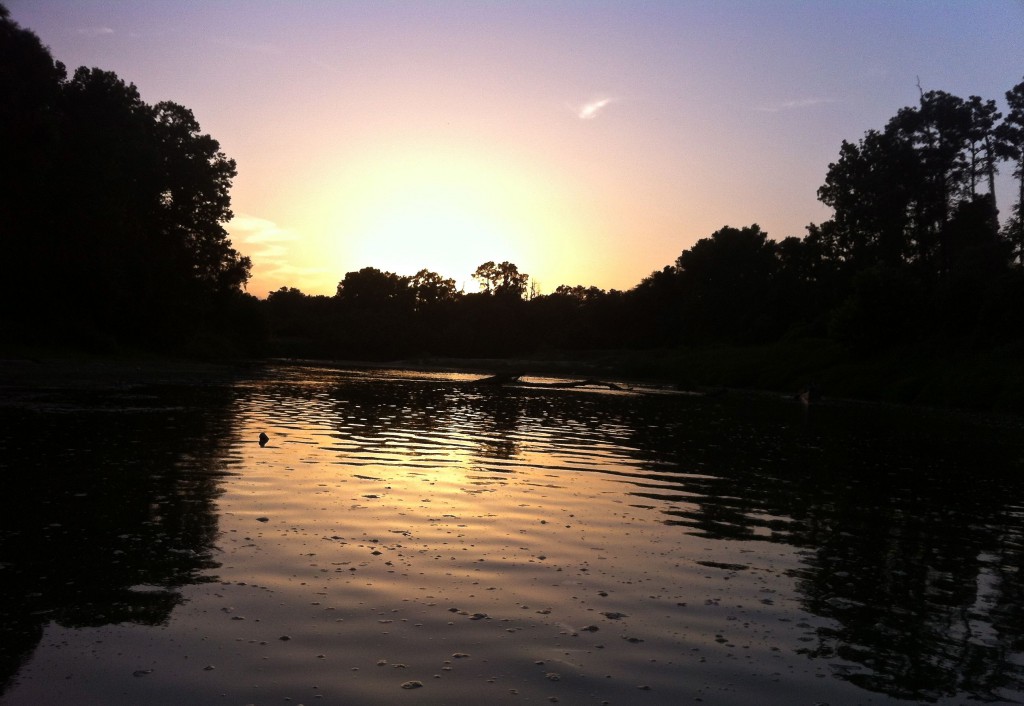