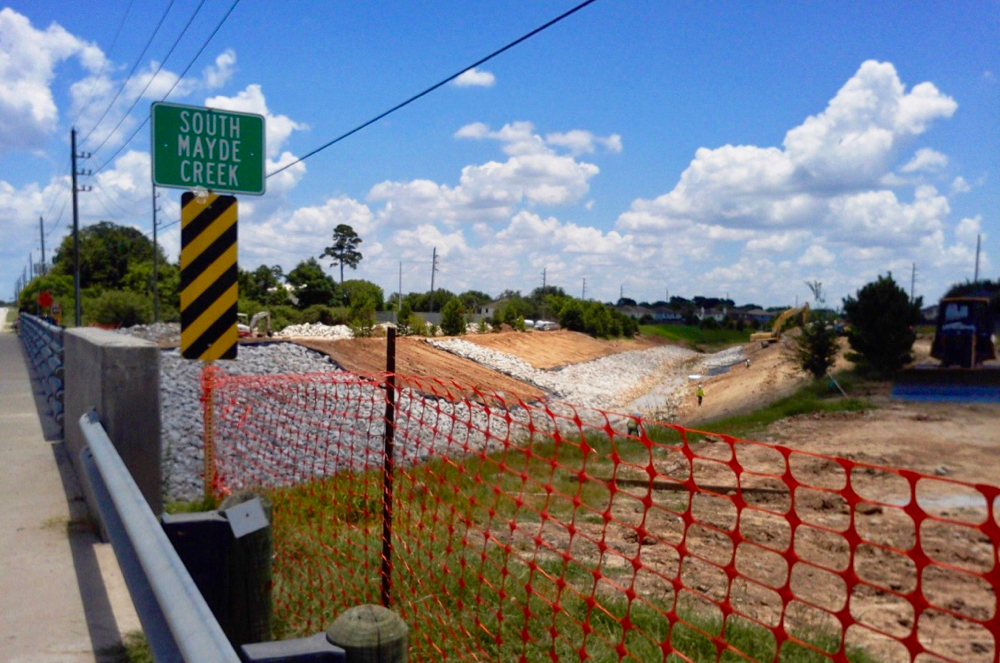 In recent decades scientists and even engineers have recognized that channelizing, deepening and widening, evening burying streams not only doesn’t prevent flooding but actually increases it  (see also p. 162 and here),  damages the environment, and requires costly continuous maintenance. Rice University recently released a new study showing that Buffalo Bayou’s “largely natural form has proven better at absorbing floodwater and preventing it from spilling over into heavily populated areas.” 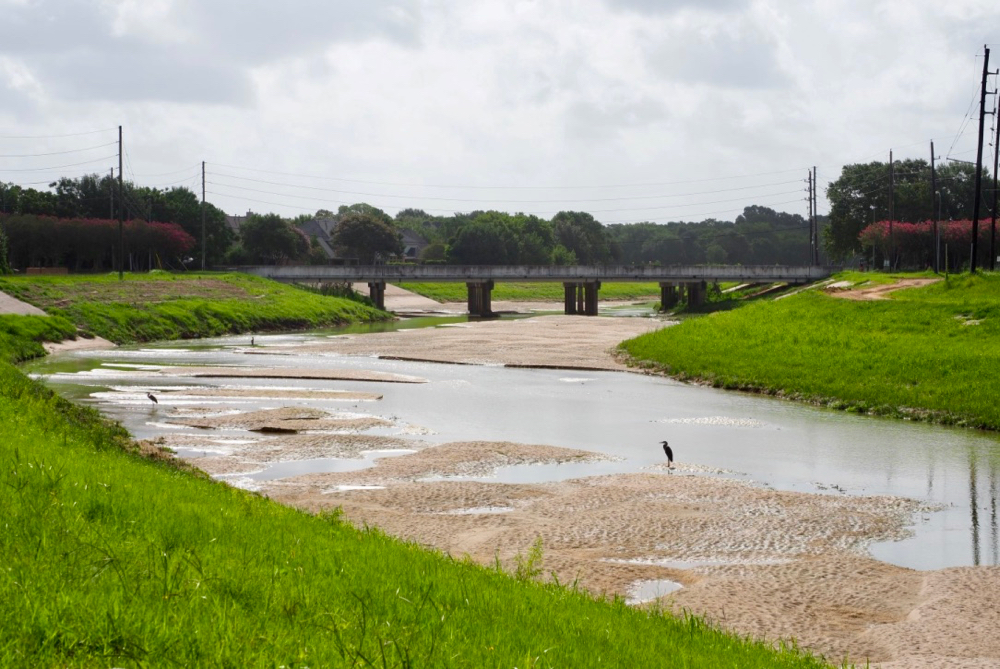 Buffalo Bayou at Mason Road in July 2018 a couple of years after having been dredged to remove silt. Photo by Adam

The fight to preserve Buffalo Bayou was led by environmentalists like Terry Hershey, Smith, and others who subsequently founded the Citizens Environmental Coalition in 1970 and The Park People in 1979, which in 2009 became part of the Houston Parks Board.

Hershey, according to Smith, persuaded then-County Judge Bill Elliott to form the Flood Control Task Force to advise commissioners’ court on what seemed to be competing interests: protecting a natural resource and engineering it for flood management (and development).

“How can Harris County government adequately protect homes and businesses from the hazards of flooding and facilitate economic development, while at the same time preserving the God-given resources we have that are still in their natural state for the present and future enjoyment of our citizens?” stated Elliott at the time.

As a result, the 31-member task force appointed by commissioners’ court was set up with an equal number of developers and environmentalists, recalls Smith. The chair of the task force was supposed to rotate each year between the two groups, he said.

The task force historically has positions assigned to environmental groups such as the Parks Board, the Citizens Environmental Coalition, the Sierra Club and Audubon Society (as well as an empty seat assigned to The Park People, which no longer exists, and a seat for a representative from the League of Women Voters), along with seats held by developer, contractor, realtor, engineer and business associations, individual builders, engineers, architects, and landscape architects. Many of the latter profit from flood control district contracts.

Here is a current list of the task force membership. There are five vacancies. The task force meets every three months on the fourth Monday of the month at 2 p.m. in flood control district headquarters, 9900 Northwest Freeway. The next meeting is April 27.

While the meetings are not open to the public, the public can go as guests. (You gotta know someone.) And the meetings are usually informative, with updates from Flood Control Executive Director Russ Poppe or other staffmembers on flood control district projects, briefings on flooding and flood history from Flood Control meteorologist Jeff Lindner, and recently, an excellent presentation by Melvin Spinks, president of CivilTech Engineering, on the Texas Water Development Board and recent bills passed by the Texas Legislature giving the board new responsibilities for flood planning and financing.

“I go there and they report,” said the longtime member of the task force. “They don’t make any huge decisions as a group.”

The member added: “There’s no clarity or transparency.”

In 2014, however, at the peak of another battle over preservation of Buffalo Bayou and its natural, beneficial functions along Memorial Park, the task force formed a committee to consider the planned Memorial Park Demonstration Project, which would have stripped, dredged, and rerouted one of the last publicly accessible forested stretches of the bayou in the city and a historic nature area. The committee and the task force decided this was a good idea.

We disagreed. And we were right.

That $6-12 million “demonstration” project was dropped after Harvey, but a similar, earlier $5 million flood control district project downstream in Buffalo Bayou Park, completed in 2015, resulted in the loss of many of the trees along the bayou, washed out sidewalks, collapsing banks, and continuous repairs. The flood control district recently spent $10 million to fix it.

And yes, we have had complaints about the reconstructed bare dirt banks washing into the bayou in the park. Apparently the non-native winter rye grass seeded on the banks has been taking a long time to sprout during our unseasonably warm weather.