What would we think if government officials issued a permit to build a bridge or a house that they knew would fall down?

What if officials knew the house would fall down on top of someone else’s house, but they issued the permit anyway?

And what if they knew that building the house would destabilize the rest of the houses up and down and across the street, but they closed their eyes and plugged their ears and said, “That’s not really our responsibility. Go ahead.” 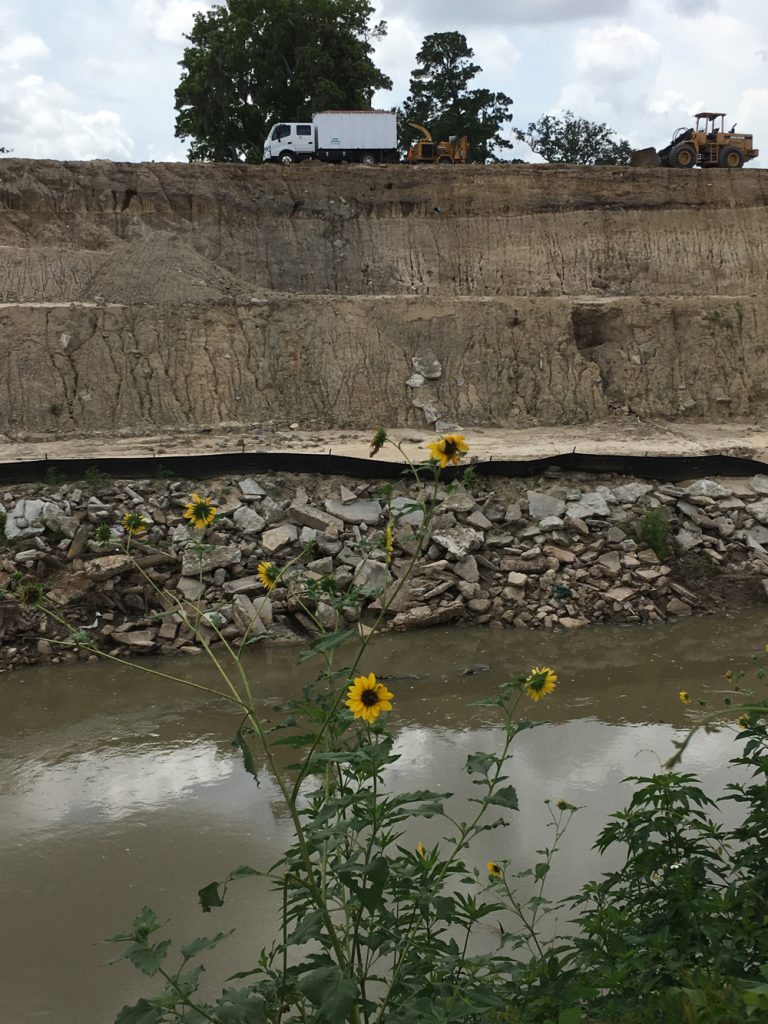 A view of Area 2 on the south bank of Buffalo Bayou below the River Oaks Country Club golf course. There were trees and vegetation there once. Taken from the opposite bank in Memorial Park on July 2, 2019

Recently a group of homeowners gathered on Buffalo Bayou watching anxiously as a heavy equipment operator across the way pounded massive panels of sheet piling into the opposite bank. Their well-founded concern was that the hardening of the bank with metal and concrete was going to direct the bayou flow onto their property, flooding, eroding, and destabilizing their homes.

It is a scene often repeated on the bayou. A lawyer with the group commented that he regularly gets calls from worried property owners asking what they can do about the alarming “erosion control” project their neighbor is building across the way or next door.

Here’s what should be done: The City of Houston needs to stop issuing building permits for these kinds of bank-hardening projects. Not only do they frequently fail, make bank problems worse, increase flooding and damage neighboring property; they also destroy the river’s beneficial functions, its ability to adjust, slow, absorb, and cleanse stormwater, collect sediment and reduce bacteria, and provide habitat for a diversity of creatures large and small necessary for the health of our environment, including trees and plants.

When one permit is issued, it forces other property owners to rush to an engineer willing to design a costly “erosion control” project for their bank too. Eventually our beautiful living bayou will be treeless and lifeless, entirely imprisoned between long ugly walls, filled with concrete debris, bouncing floodwater back and forth across the channel.

They Know These Projects Fail and Cause Damage

The City knows this. So do the Harris County Flood Control District and the Corps of Engineers, which also granted a federal permit for this project, although largely out of inaction, failing to respond within the required time limit.

Recognition that these bank hardening projects fail and cause damage was theoretically the basis for the controversial and misguided Memorial Park Demonstration Project, for which city and county taxpayers were asked to spend some $4 million. The project, first proposed around 2010 and dropped after Harvey, was based on a faulty analysis of the kind of bank problems we have on Buffalo Bayou. (Our banks mainly collapse vertically, by sliding down. And then gradually restore themselves, if left undisturbed.)

While the idea that neighbors should collaborate was a good one, their solution was not. The absurd plan was to demonstrate better “erosion control” by razing the trees and vegetation, digging up the banks, dredging and rerouting a long stretch of the bayou flowing past Memorial Park in the center of Houston, a historic nature area.

The project likely would have failed, washing out in a flood like Harvey, leaving behind a wasteland, as similar projects elsewhere have done. 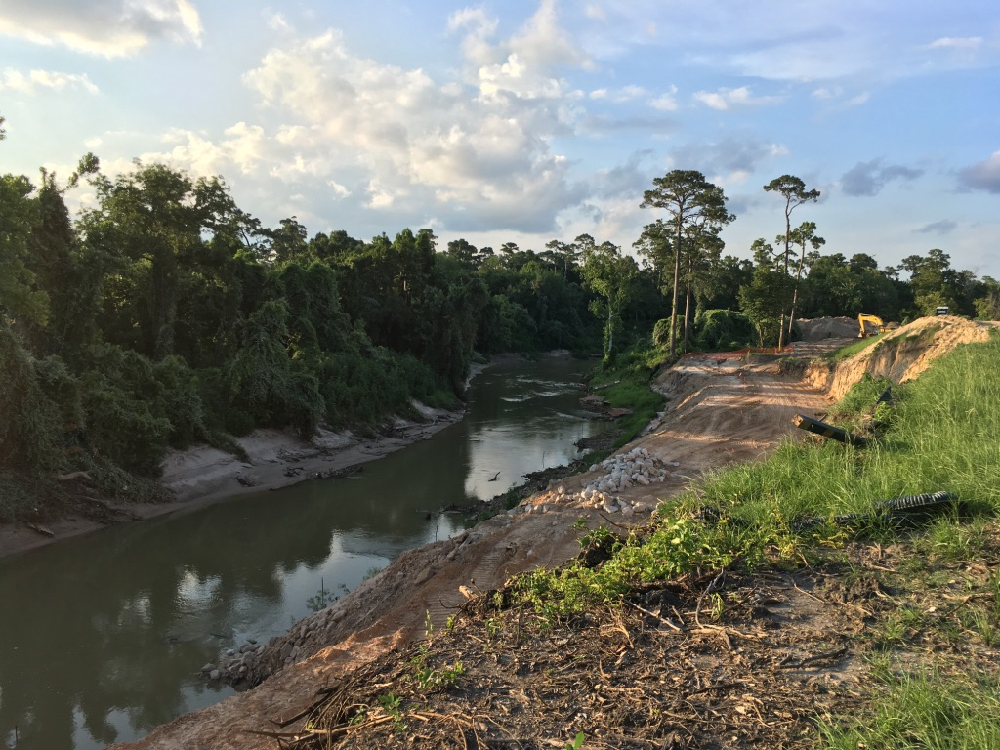 “Slope repair” work in Area 1 of the south bank of Buffalo Bayou, edge of River Oaks Country Club golf course, with the bank of Memorial Park opposite. There were trees and vegetation on and below this high bank. Photo July 2, 2019

The Corps of Engineers pointed out at the time that bank armoring “at a single point of erosion” was “ineffective” on Buffalo Bayou, “redirects stream energy to a new … location downstream” and “in most cases” resulted in “eventual failure.”  (p. 4)

The Federal Emergency Management Agency (FEMA) (p. 8), the Flood Control District, and the Corps have all recommended against bank hardening for the same reasons. (p. 21)

The elite River Oaks Country Club owned the entire south bank of the Demonstration Project area, over a mile in length. The bayou flows past their manicured golf course, which extends in places to the very edge of the bank, contributing to their bank problems. The club, though owning half the land, was to be a one-third partner in that project.

Around 2018, with the end of the Demonstration Project, the club began making plans to build exactly the kind of “erosion control” that government officials had earlier dismissed: a massively destructive and largely unnecessary $18-24 million “slope repair” project along three large sections of the bayou. Yet these same government agencies, apparently with eyes closed and fingers crossed, approved the club’s plans.

Ostensibly, according to its federal permit, the club is restoring upland lost specifically to Harvey. But the permit application contained no documentation of the upland alleged lost specifically to Harvey, contrary to Corps regulations. (p. 7) The application also claimed there were no wetlands in the three areas (p. 11), despite the fact that wetlands there had been documented and verified years earlier by Corps.

The club had less destructive, less costly options for restoring and protecting its bank. And the City should require the least damaging alternative. This common sense standard is part of federal law, for example, though often ignored.

Protecting the “the natural and beneficial functions” of our “floodprone lands” is a City obligation under FEMA’s National Flood Insurance Program.  Failing to do that could result in an increase in flood insurance policy premiums for Houstonians. (p. 1)

The bayou is a public stream, its waters held in public trust by the state of Texas, and theoretically protected by the Corps of Engineers and the Texas Commission on Environmental Quality. The public, through the Port of Houston, also own its submerged lands. (See “Who Owns the Bayou?”) 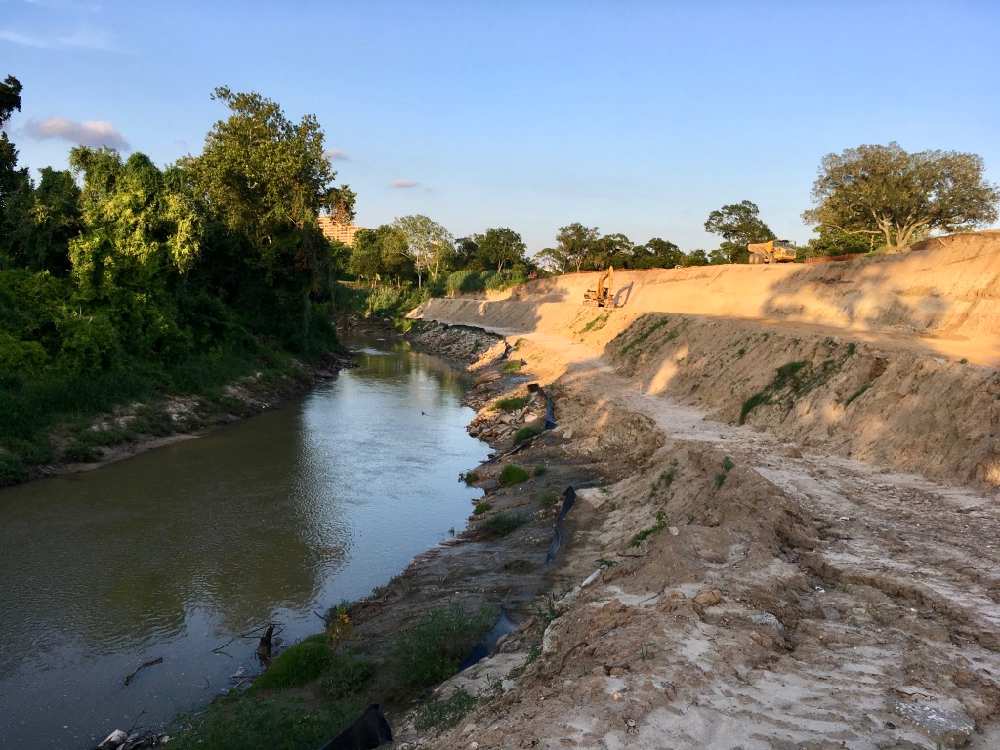 Looking downstream from the south bank of Buffalo Bayou in Area 2. Memorial Park opposite. After expansion of the golf course, removal of trees, and construction of a concrete path close to the high bank, this area did lose some bank both before and during Harvey. Photo July 2, 2019

Choosing the Worst, Most Expensive Solution

But the club chose the worst, most expensive solution. The worried group of homeowners were staring at one of three sections of the nightmarish project, which is also opposite the forested banks of our great Memorial Park and the Hogg Bird Sanctuary. So this public property, one of the last publicly accessible, forested areas of the bayou in the city, will be affected too.

The club was founded in 1923 amongst a tall forest of “river oaks,” opposite the riparian forest and former World War I training camp that would soon become Memorial Park. In recent decades, including as recently as 2015 as part of its golf course renovation, even in recent months for this misguided “slope repair” project, the club has cut down most of these trees to expand its mowed and watered golf course to the edge of the bank. They also built a new concrete cart path next to the bank, and have been dumping parking lot debris and other concrete trash onto the bank.

All of this is contrary to Best Management Practices for river banks, particularly high banks prone to vertical slumping, as the banks of Buffalo Bayou are. It is in these now treeless, manicured areas, particularly at two points where small streams (technically protected “federal waters) flow across the golf course into the bayou, that the club is attempting to “restore” its bank. But the bulldozing and grading, pounding of sheet metal, concrete columns, and concrete riprap into the bank is likely to destabilize the banks even further.

A Lack of Awareness. A Shifting of Responsibility

Amazingly, some City officials are not even aware the City has responsibility for projects on the bayou. Construction permits for bank projects are issued by the Floodplain Management Office, part of the Public Works Department, through Chapter 19 of the City Building Code.

But talk to someone in the floodplain office and they will say they depend on Harris County Flood Control to approve bank construction permits. Flood Control has no actual authority, but they do review such permits, as they did in this case—with the standard disclaimer that they don’t really know whether the project is going to work or fall down or harm someone else. But, they say, the permit application claiming “no adverse impact” is signed by a licensed professional engineer so it must be so. (p. 2)

Beyond that the engineer’s report does not analyze how the bayou flow will be redirected or interact with floodwater rushing out of opposite creeks, which have radically changed from the outdated maps used in the permit applications. There is no consideration of the usefulness of trees and vegetation or the impact of hardening and smoothing of the bank itself, other than to show that the stream will likely move faster “due to the improved channel bank surface with concrete walls, steel sheet piles and smoother new grasslined slopes in the project area.” (p. 10)

But moving the stream faster increases the erosive force of the stream, points out the Association of State Floodplain Managers in a 2013 report. (p. 23)

The Corps of Engineers also concluded decades ago that “increasing flow velocities” increases erosion and causes more siltation, a continuing and costly problem for the Houston Ship Channel (p. 18) as well as for county taxpayers who spend millions annually repeatedly dredging sediment out of our dredged waterways.

Sheet pile walls, concrete rip rap, and other hard structures and materials are among the most common causes of excessive erosion of stream channels. (p. 34-36)

What is the Least Damaging Alternative?

The City and the County should be educating property owners about Best Management Practices on our streams: don’t cut down the trees, don’t dig up and landscape the bank. Science has shown that plant roots, which grow and expand, are in fact more resilient than concrete and better at stabilizing slopes and streambanks. (p. 44)

Retreat. Pull back from the edge. Stop mowing the grass. Leave a buffer zone of native trees and plants of at least fifty or even a hundred feet in width next to the bank. This Texas field guide is useful.

Instead, with the permission of officials who should know better, this property owner has done everything possible to make things worse for themselves and their neighbors.

“Private Club Destroying Bank of Buffalo Bayou, Threatening Self and Neighbors, with City Permission,” May 22, 2019 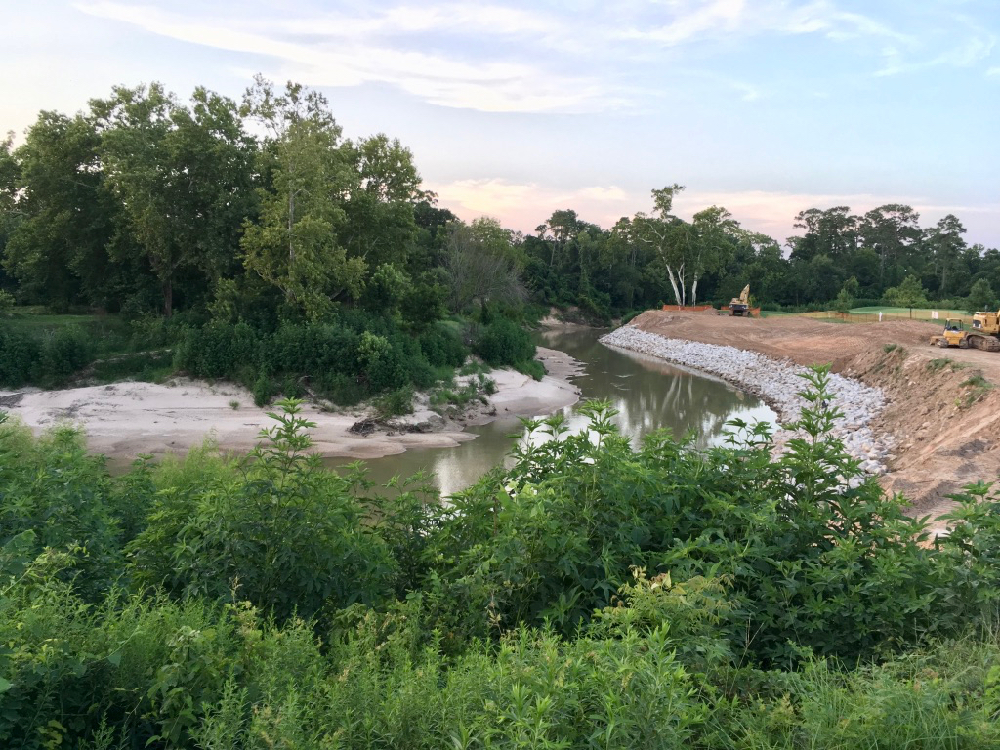 Area 3 near the downstream end of the country club golf course opposite private residences and the Hogg Bird Sanctuary. Large sheet pile walls have been driven into the ground above the concrete riprap. Photo July 2, 2019