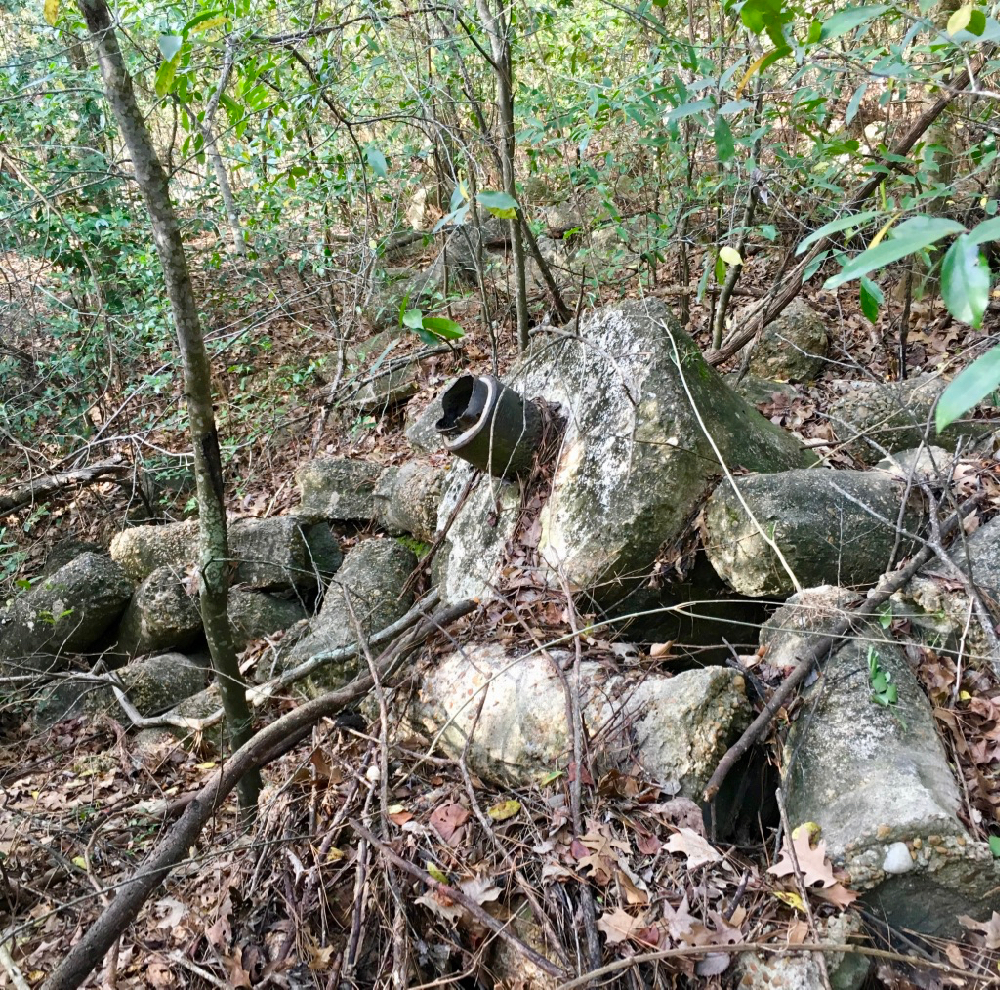 The bank of the bayou was much closer and more visible than it was before Harvey, especially now in the spareness of winter. We passed several more decaying Loblolly pines, these still standing but diminishing, their once majestic tops missing and ragged, the bark having dropped away.

We came to our spot and were a little taken aback. The water was extremely low, flowing at about 150 cubic feet per second, exposing sand and muddy banks, as well as a natural jetty of broken sandstone extending into the channel. The ground was almost bare. Everything on both banks was lifeless and brown. How to make a pretty picture of this? 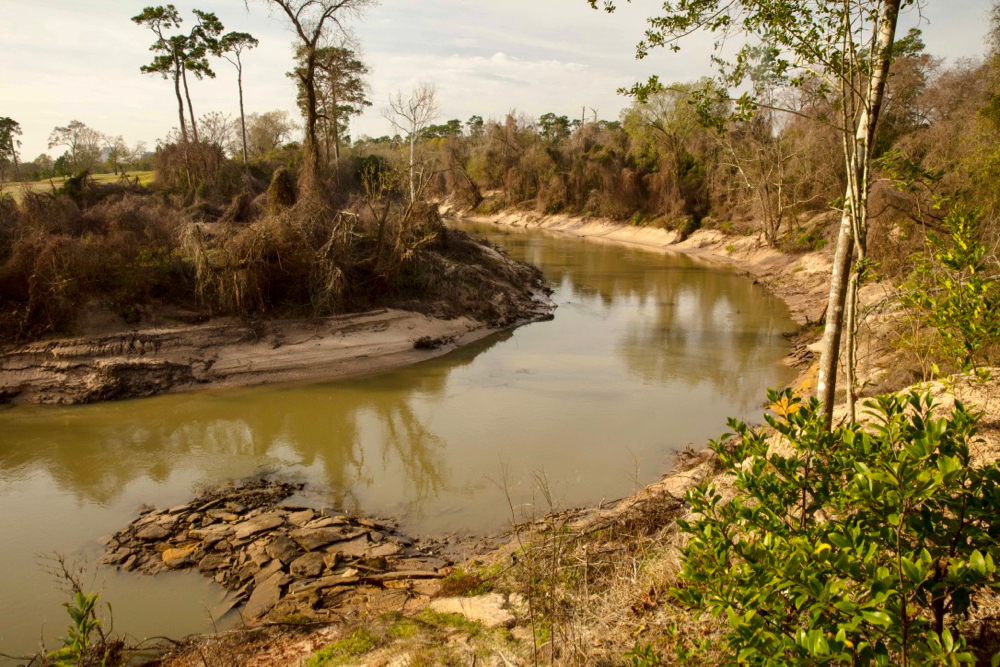 But this was the bend in this season. It looked much wider, probably the result of Harvey, possibly too the result of damage done by Flood Control maintenance contractors digging at the bank to free the barge they were using to remove large woody debris from the banks and channel. Leaving wood debris on the bank allows it to rebuild naturally, and also protects the bank and controls sediment.

Jim set up his camera and waited patiently for just the right light. The assistant wandered off as usual to visit the nearby sandy creek that drains the center of the park. It too had been much changed by the torrents of stormwater from Harvey. The water was clear. There were new palmettos (sabal minor) and—a sign of spring—a few early wild violets (viola odorata) on the bank. 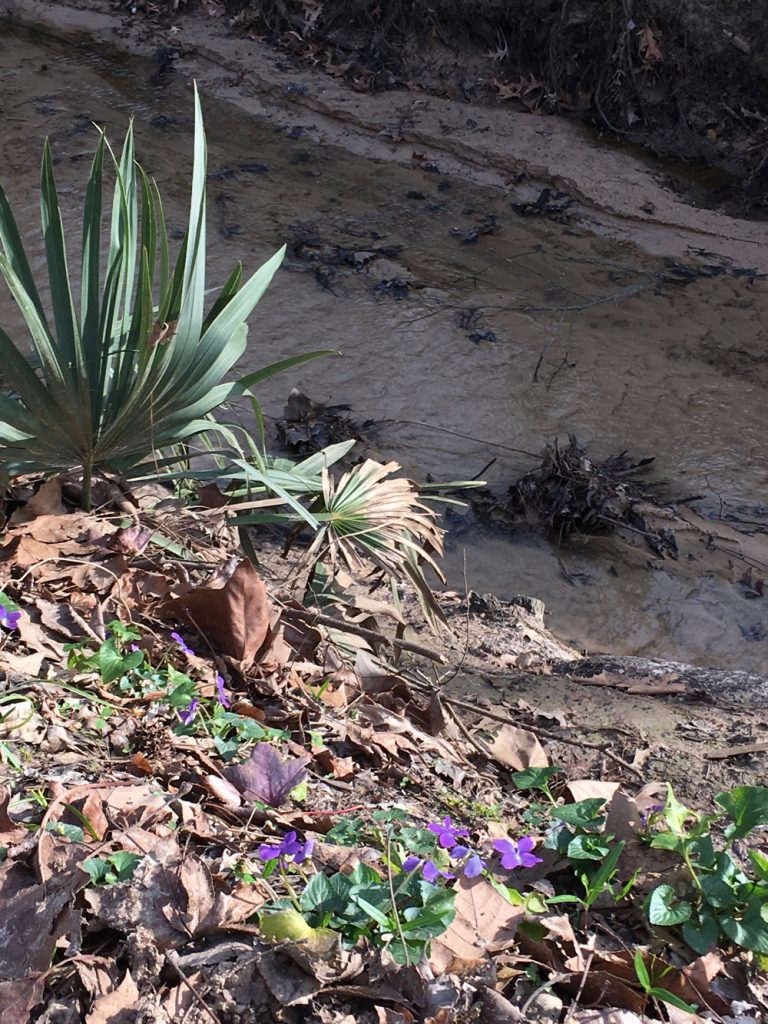 Wild violets and palmetto on the sandy bank of creek in Memorial Park, a tributary to Buffalo Bayou. Photo by SC on Feb. 14, 2019

Jim got his shot. It turned out to be a lovely photo, of course, fortunately relieved by some yaupon (ilex vomitoria) evergreenery. He offered assurances that the seemingly dead vines and trees would grow back. 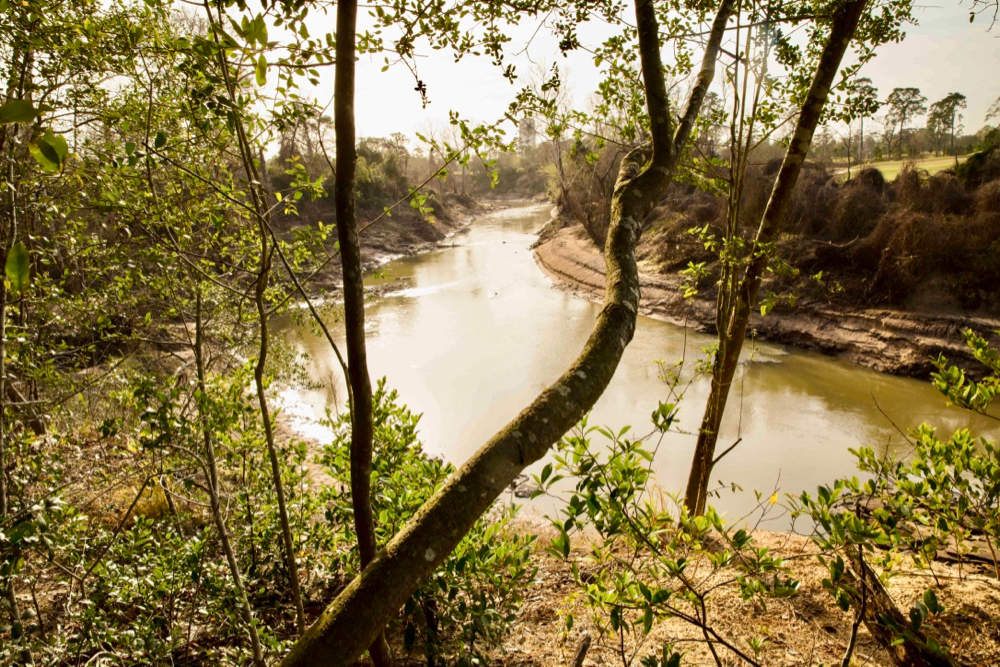 Jim Olive’s lovely winter photo of that bend in the river despite the gloomy February morning  and bare trees and banks. Flow was very low, about 150 cfs.  Taken from a high bank in Memorial Park looking downstream with the golf course of the River Oaks Country Club opposite. Photo Feb. 14, 2019, by Jim Olive

So Many Trees Being Removed

On the way back to the parking lot, we noted the large numbers of trees on both sides of Memorial Drive marked for removal with pink and orange tape. This, we are told, is to make way for the land bridge to be built over Memorial Drive, part of the $200-300 million remodeling of the park. And though we aren’t told, because the public is not being told, and the City of Houston refuses to release the plans, trees are also being felled for the expansion of the popular public park golf course by the Astros Golf Foundation, which is remodeling the course in preparation for holding PGA Tour professional golf tournaments there, specifically the Houston Open. 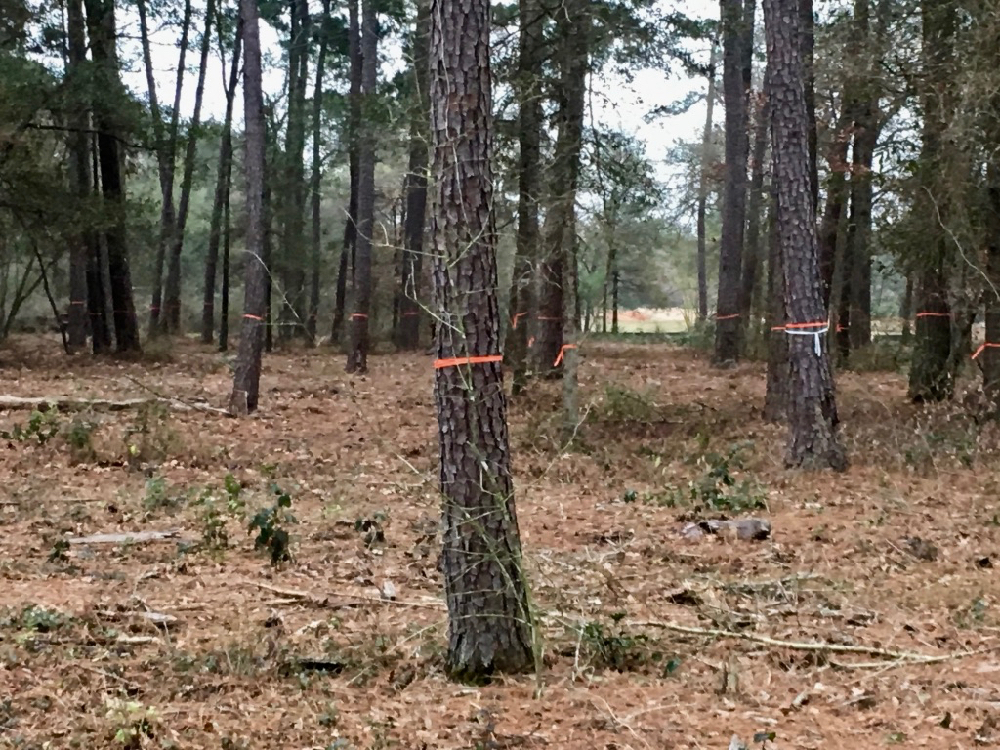 A few of the hundreds of trees tagged for removal in Memorial Park. Photo taken on north side of Memorial Drive by SC, Jan. 31, 2019

Years ago Jim, also an avid cyclist, was among those who opposed the move of the Houston Open, then being played in The Woodlands, to Memorial Park. The plan then was to turn the South Picnic Loop area, popular with bikers (including Jim) and picnickers, into a parking lot, said Jim. “Can you imagine?” he exclaimed waving his hand in the direction of the wide grassy expanse of trees and picnic tables and grills, many of the old concrete picnic tables and benches in the process of being replaced with wood and metal furniture.

In the end that deal didn’t work out because, according to news reports at the time, the City wouldn’t fund renovation of the course and was demanding to be paid for use of the park. Imagine!

This time around, the initial $13.5 million phase of the renovation is being funded privately, apparently through the Astros Golf Foundation, though the City is not saying by whom, and plans for parking as well as other details are deliberately vague, no doubt in part to avoid public opposition.

As noted above, the Mayor’s Office has refused a Public Information request for the details from Save Buffalo Bayou.

Here is an explanation from one of our geologists about the apparent stone “jetty” extending into the channel in the photo above looking upstream on the bend in the bayou.

“It has always been there.

“There is now more exposed than in the past, which shows how much the meander is meandering to the outside of the curve. Three or four years ago only about the first third was exposed. The sand bar on the opposite bank has been accreting at about the same rate as the cutbank recedes, so that the width of the bayou has remained constant.

“As the clay that previously encased the sandstone layers has washed away, the layers collapsed. This is a common phenomenon wherever these sandstone lenses are exposed.

“Pretty soon the cutbank will remove the last bit that separates the mainstem bayou from the tributary that comes down from the golf course. Right now the tributary makes a sharp left turn and flows parallel to the main stem for about 60 m before making a sharp right turn and joining at right angles to the main stem just upstream from the gas pipeline (where another sandstone ‘jetty’ is emerging). After the cut bank removes the last septum, the stream will join straight into the apex of the meander, just like at the Middle Meander.”