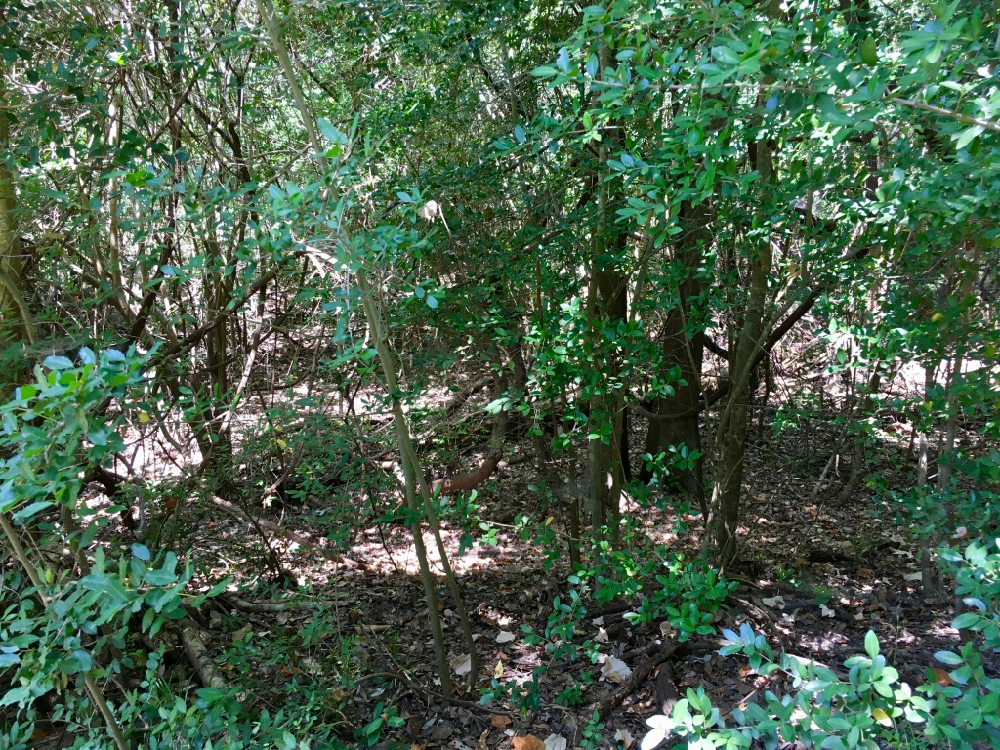 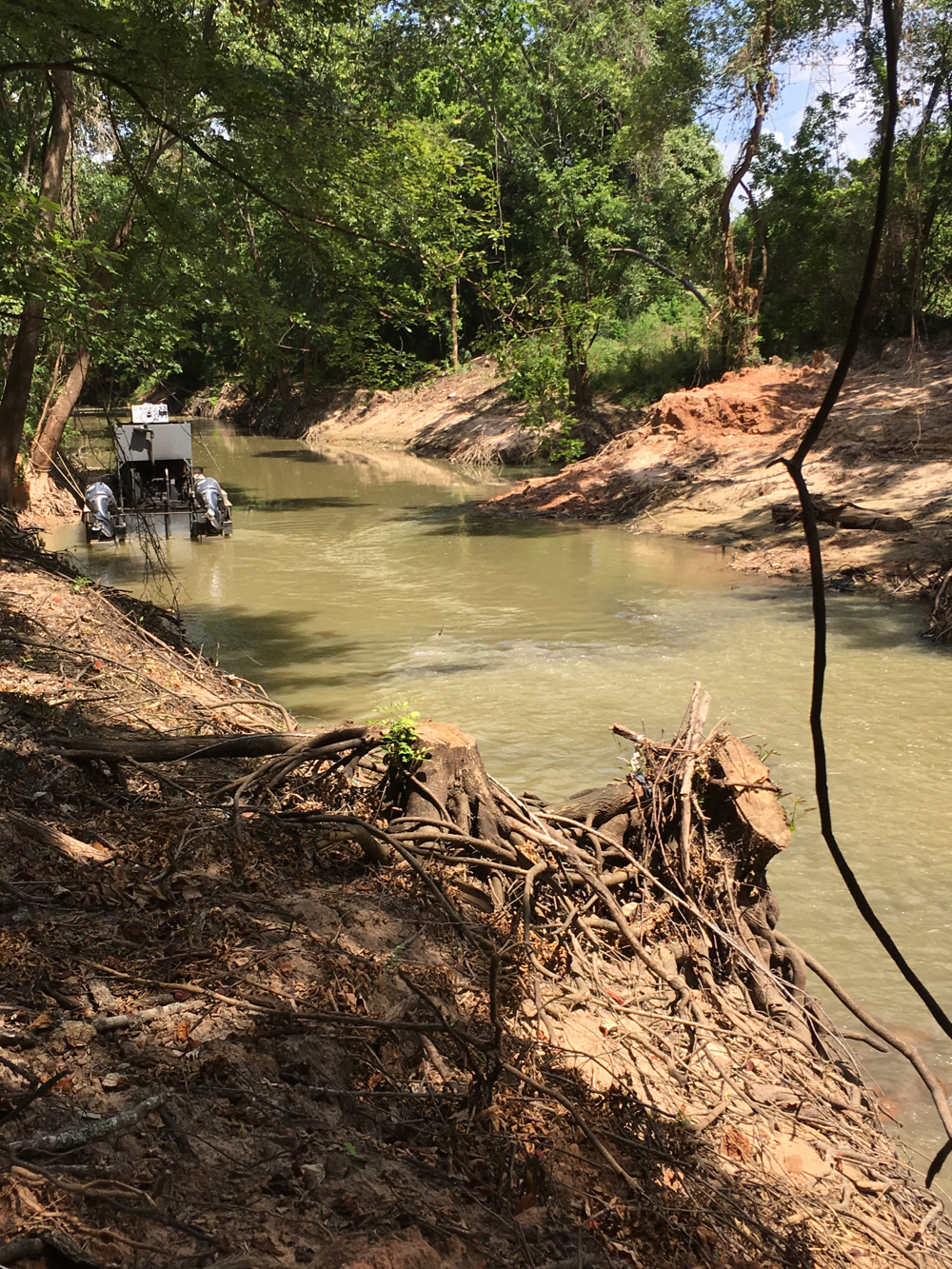 But the Harris County Flood Control District, established in 1937 when stripping, channelizing, widening, deepening, and concreting streams was the way to go, was given a limited set of legal tools and little choice but to continue this outdated mandate.

Trees have grown back over the last fifty years. Some oxbows remain. The bayou has made repeated attempts to restore its own meanders. Meanwhile the focus of modern flood management elsewhere has shifted. Recognizing that flooding begins on the land, flood management now emphasizes managing flooding in place (before runoff leaves the property), slowing the flow and stopping stormwater before it floods a stream, not after. The county has little authority over stormwater before it enters a stream, though it does have a role in approving floodplain maps and development plans. Drainage into our waterways is the responsibility of the City of Houston and municipal utility districts, a well as the Texas Commission on Environmental Quality and the Texas Water Development Board.

Residents of adjacent neighborhoods, where many flooded homes close to the bayou are still sadly empty, might want to look at this map of the original meanders of the bayou. Rivers, even small streams, have a memory and often seek out their historic course.

The popular 500-acre park, which stretches along the bayou between Highway 6 and Beltway 8, is one of the few areas providing public access to the riparian woods of this ancient stream. Below Beltway 8 downstream to Shepherd Drive the bayou banks are largely privately owned, other than the Hogg Bird Sanctuary, Memorial Park, and Briarbend Park, not counting roadway bridges. East or downstream of Shepherd, the banks have been razed, bulldozed, landscaped or hardened for industrial use.

But on the south bank of Terry Hershey Park people can still stroll through the soothing forest, filled with birdsong, along dirt paths now littered with ripe mustang grapes, paths apparently maintained by the numerous members of the Anthills group of the Greater Houston Off-Road Biking Association.

Removing forest, which is known to have a beneficial effect on mental and physical health, would seem to be an unhelpful thing to do at this time when so many people are suffering from the stress and anxiety of having lost so much to flooding. Residents at a packed meeting of the Briar Forest Super Neighborhood last month became distressed and began shouting when representatives of the flood control district attempted to explain the project. Those who haven’t been for a walk in the woods lately might give it a try. The Japanese call it “forest bathing.”

Flood Control, which has owned this stretch of land since the 1960s, plans to build two or three initial detention “cells” between Eldridge and Dairy-Ashford to capture and temporarily hold some 60 acre-feet of water out of the flow in the bayou during a rainstorm. The detention is to compensate for increased stormwater that the City of Houston might drain into the bayou from adjacent city streets, according to representatives of the district.

At the moment, however, the City’s Public Works Department has no specific drainage projects associated with Flood Control’s plan, wrote Tommy Artz, leader of Public Works’ Interagency Coordination Section, in an email. Studies have been done for several drainage projects between Wilcrest and Kirkwood north of the bayou and west of Dairy Ashford, said Paresh Lad, assistant director of infrastructure planning for Public Works.

Unknown Amount of Existing Natural Detention on the South Bank

It is not yet known how much natural detention already exists on the floodplain in the slightly rolling woodlands south of the bayou, wrote Allan Black, director of engineering at Flood Control, in a recent email. R.G. Miller Engineers has been contracted by the county to design and construct the new detention basins, a contract which requires a topographic survey of the elevations of the site as well as a modeling and comparison of conditions there before and after the project. The company is being paid $632,499 for final design and construction phase engineering services for the linear detention project. Harris County Commissioners Court has already awarded a $13.32 million contract to Lecon Inc. for construction of up to three linear detention cells as part of a larger project that includes removing silt and sediment from four streams feeding into Addicks Reservoir: Horsepen, Bear, and Langham creeks, as well as an unnamed tributary of Langham Creek.

Flood Control’s detention plans for the south bank are not new. In 2011 local residents on the south bank of the bayou formed a grassroots organization called Save Our Forest to fight Flood Control’s plans to cut down forest and build as many as 24 linear or in-line detention basins on both sides of the bayou between Beltway 8 and Highway 6. Many of those residents were flooded during Harvey. But Landrum Wise, a leader of the group, says he and others, though exhausted by the struggle to rebuild their homes and lives, have not changed their minds about preserving this precious remnant of urban forest.

Watch this slide show of a walk through the woods of the south bank of Buffalo Bayou in Terry Hershey Park:

Here is a brief video with the sound of birdsongs and water flowing through the park. The large pipe is releasing treated water from the Turkey Creek Wastewater Treatment plant into the bayou.