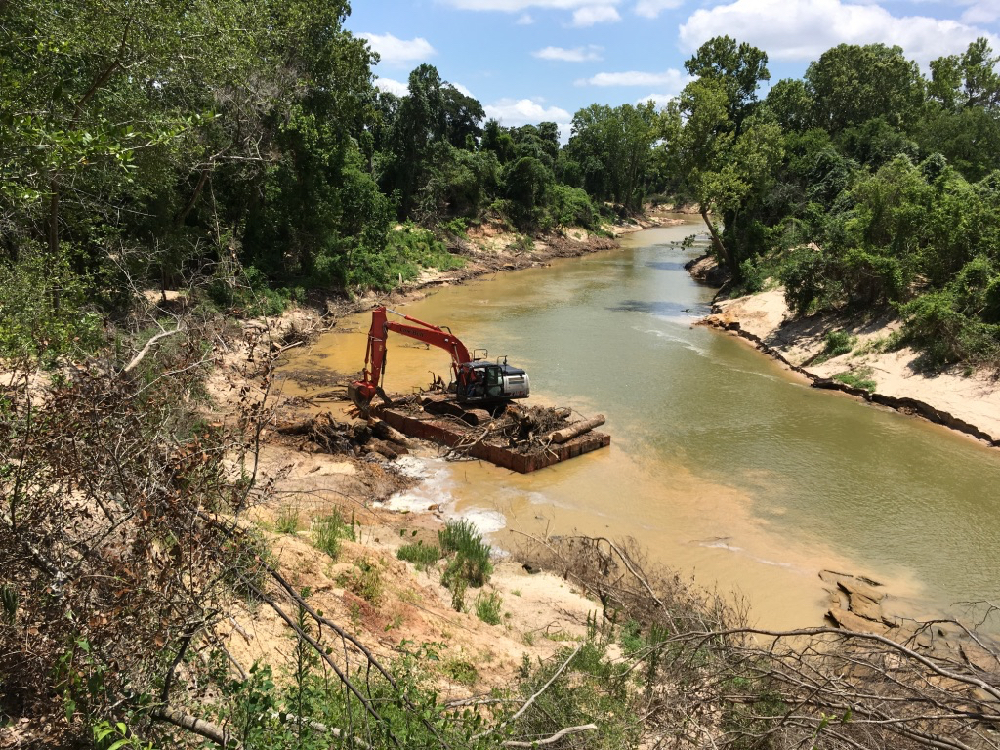 Without trees on and in the bayou, the bayou would become a barren, shifting, sandy wasteland, much more prone to washouts and collapsing banks, unable to stabilize and restore itself, sending increasing amounts of sediment (and trash) downstream. Alarmingly, some scientists maintain that once the trees are gone, as trees on our urban streams continue to be cut down, they cannot be replaced, and their vital function is lost forever.  (pp. 12-13)

Both Buffalo Bayou and Cypress Creek experienced severe flooding as a result of Harvey, for a variety of reasons, though Cypress Creek floods more regularly. Removal or repositioning of some large woody debris that blocks the flow is necessary for what flood managers call “conveyance” as well as recreational paddling. But there are right ways and wrong ways of doing it.

In the past, the practice of natural resource and flood control managers was to remove all large woody debris to improve stream flow or conveyance. But that began to change in the Seventies with the recognition of the importance of fallen trees.  Now the practice around the country is not just to leave strategically positioned logs in streams but actually to put them there, even saving large logs for that purpose. (p. 7)

By contrast, the Harris County Flood Control District continues to remove most of the large woody debris in the channel and even cuts down living trees. Its debris removal contractors are paid by the ton, which can lead to inappropriate, opportunistic clearing. There seems to be little oversight. One witness reported seeing a large fallen tree being dragged down from the high bank in Memorial Park. On a recent canoe trip past the park, we saw the stumps of numerous large trees high on the bank that had been recently cut. Gravel bars covered with mussel shells in the channel had been dredged and banks scraped and cleared, wetland springs mucked over. The concrete remnant of the historic Camp Logan bridge linking the north and south banks had been removed from the middle of the stream.

All this in an area where the district, while claiming there were no overhanging trees, had planned to spend at least $4 million in taxpayer dollars to strip the trees and vegetation from the banks and then insert logs with root balls into the banks in order to demonstrate what it called Natural Stable Channel Design. (p. 2)

Now they were removing the logs where they had planned to spend millions to put them in.

In order to do this maintenance, the contractor bulldozes a path and sends heavy equipment, a trackhoe, down the bank and onto a floating barge. The district has only a few access points on Buffalo Bayou, chiefly property off of Willowend Drive in Memorial west of Voss Road and a temporary easement on Asbury Place west of Shepherd Drive, as well as Terry Hershey Park, which the district owns, between Highway 6 and Beltway 8.

Watch this video of a maintenance trackhoe dragging the north bank of Buffalo Bayou upstream of Shepherd.

In order to facilitate the floating barge in the low flow of the bayou, which can be less than a foot in places, the contractor builds a dam to block the flow and scrapes and dredges the bayou bottom to deepen the channel. Nevertheless, the barge sometimes gets stuck in the sandy, sandstone channel, and on one occasion recently sank.

Watch this video of the debris removal contractor at work on Buffalo Bayou in Memorial Park on May 19, 2018.

All of these practices are profoundly damaging, crushing the beneficial soil structure beneath and beside the river that helps to absorb and cleanse the water, crushing the beneficial creatures that live in the soil and the water. Buffalo Bayou is teeming with life, from tiny creatures like molecrickets in the sand to massive alligator snapping turtles and alligators. (One creature the bayou does not have is mosquitoes.)

Since removal of the large woody debris results in greater amounts of sediment flowing downstream, more of this sediment ends up in the Houston Ship Channel (and in parks and property along the way). The Port of Houston spends an average of $30 million a year to dredge sediment out of the 52-mile long ship channel and maintain the ship channel at its authorized depth of 45 feet, said Port representative Bill Hensel in a recent telephone interview.

Sediment capture and control is an issue for the Port, which owns the submerged lands of Buffalo Bayou, despite what the county appraisal district tells adjacent property owners. (Maps show ownership to the center line of the bayou.) At a winter conference in Galveston organized by the Galveston District of the Corps of Engineers, the Port’s Chief Infrastructure Officer Richard Byrnes called for enhanced flood management projects to better capture sediment.

What They Should Be Doing

What should Flood Control be doing about the large woody debris in the bayou and elsewhere?

Public agencies across the country from Connecticut to the Mid-West (and here), from Fort Worth to the West Coast recommend leaving fallen trees strategically placed in the stream and against and on the bank. Public officials first survey a stream, noting where there are problems blocking the flow. The consensus is that fallen trees in the channel should be left parallel or at a 45-degree angle to the bank, facing downstream with the root ball upstream. If necessary, the logs can be anchored to the bank.

“Downstream facing [Large Woody Debris] LWD that is somehow anchored to the bank, either naturally or artificially, can prevent bank erosion by directing flow away from the bank and toward the midstream. LWD that is adjacent and parallel to the bank can effectively armor the bank and prevent erosion.” (p. 7)

“The log with a root-wad is considered a ‘key piece’ because it is likely to be stable during bank-full flows and influences many of the physical and ecological characteristics of a stream reach.” (p. 7)

Those who know the bayou well report that some large logs with root wads had been in place for several decades and more.

Having received notice from the district about debris removal activities on the bayou following Harvey, we first raised our concerns and asked Matt Zeve, chief of operations for Flood Control, to clarify the district’s policies and practices last November.

By email Zeve responded in part: “Not all debris will be removed from the Bayou including any vegetative debris that is silted into the slopes or bottom of the channel. The contractor will not be digging to remove debris.  He will only remove loose debris that is either currently blocking flow or has the potential to wash into the flow line and block flow in the future. He will also be removing debris that has washed against any bridge, pipeline structure, or utility.”

However, we saw the contractor mucking around in the channel bottom. The banks were virtually cleared in most places. Workers are authorized to cut live trees leaning over the water at a 45-degree angle, though they are supposed to consult with Flood Control first, said Karen Hastings, project communications manager for the district. Cutting down trees providing cooling shade to the stream is bad enough. But we documented the stumps of numerous upright trees that had been cut on public and private property.

Flood Control does not have the right to access private property without the owner’s permission.

Debris removal operations were continuing up Buffalo Bayou to Voss Road last week, as well as on Cypress Creek, said Hastings. Large woody debris removed from the streams is taken by the contractor to a “debris management site.” Some if not all of it is turned into wood chips.

“This is a debris removal contractor, tasked with removing obstructions to stormwater flow,” said Hastings.