But personnel and policies can change. The Corps is under a mandate to “engineer with nature.” (See also here.) 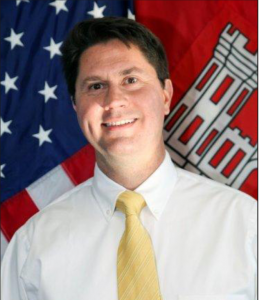 Edmond Russo, deputy district engineer for the Galveston District of the Corps of Engineers.

Russo has been deputy district engineer for programs and project management for the Galveston District since January 2014. He is a civilian employee, a native of New Orleans, and a graduate of Louisiana State University where he received his doctorate in civil engineering in 2009. While completing his doctorate he was in charge of a similar two-year, $20 million post-Katrina study called the Louisiana Coastal Protection and Restoration Project. Since then, and prior to moving to Galveston, he served as chief of the Ecosystem Evaluation and Engineering Division in the Environmental Laboratory of the US Army Engineer Research and Development Center (ERDC), in Vicksburg, Miss.

We Are All Part of a System

The Houston regional watershed study would cost $3 million and take three years. Watershed studies are authorized under Section 729 of the Water Resources Development Act of 1986, as amended. Such studies are meant to lead to a “strategic course of action,” said Russo.

The dams study, authorized under Section 216 of the Flood Control Act of 1970, also would cost $3 million and take three years. The cost of this would be split 50/50 between the federal government and the flood control district. “Ideally, we would be funded for these simultaneously for synergistic effect,” Russo wrote in a follow-up email.

The 70-year-old dams are currently undergoing some $72 million in repairs. But Harvey showed that increasing rainfall combined with development below and above the dams is now putting more water into the reservoirs than they were designed to hold. Something’s gotta give.

The Corps of Engineers, like the Harris County Flood District, is by law not allowed to lobby. Citizens who want to see policies and projects funded and carried out should contact their political representatives.

However, earmarking or designating federal funds for specific projects and political districts was banned by Congress in 2010. How the $17.4 billion recently appropriated to the Corps of Engineers for flood mitigation will be divided among districts and projects will be decided in Washington, D.C., by the Corps’ Programs Integration Division, the Office of Management and Budget, and the Assistant Secretary of the Army for Civil Works, said Russo.