About twenty people, including City Council member Oliver Pennington, were at the monthly meeting of Super Neighborhood 22 last Thursday to hear the Bayou Preservation Association argue in favor of its bizarre plan to destroy Buffalo Bayou. The BPA and the Memorial Park Conservancy are in cahoots with the Harris County Flood Control District to do what the county has long wanted to do: strip and channelize some of the last remaining natural segments of Buffalo Bayou.

Yes, it is difficult to believe. The BPA was founded long ago to prevent this very thing from happening, and the MPC also took over the mission of Miss Ima Hogg and others to preserve and protect Memorial Park. The project they have helped create and eagerly promote would bulldoze the vegetation and trees from most of both banks along nearly 1.5 miles of the bayou as it flows past the Hogg Bird Sanctuary and Memorial Park on the north and the River Oaks Country Club golf course on the south. It would rechannel the bayou, grade the banks, plant them with Bermuda grass, destroy the scenic tributary of the Hogg Bird Sanctuary as well as the very, very old high bluff that overlooks it, and a lot more.

But it will all be done in a “holistic” way, with regret and great sympathy and understanding for what the bayou really wants to be, and also it will be gluten-free, although alas, not animal-cruelty free, as most of the creatures, including fish, beaver and otter, dragonflies and hawks, will have to sacrifice their habitat. 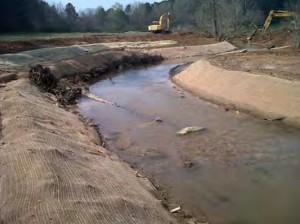 Mr. Pennington, who is running for mayor, said with a smile that he was all in favor of ruining some of our last bit of wild bayou in our public park in the middle of the city. There was little indication he actually knew what the project would do, as he thought we were in favor of it too.

The presentation by the BPA began with slides of some erosion that occurred in 2006 on private property on the north bank near the Hogg Bird Sanctuary. Unlike the rest of the project area (so far anyway), this large property had been mostly stripped, thus losing its natural riparian forest buffer and washing out. (Stripping the riparian buffer, nevertheless, is their nonsense plan for the rest of the bayou.) Terri Thomas, a member of the board of the MPC, happens to be the owner of this large property that happens to be in the project area, and Thomas is an avid promoter of razing the rest of the bayou despite what happened to her property. Thomas showed photographs of trees that fell into the bayou years ago, the “soil bioengineering” restoration that she paid for, along with images of how successful it was, although it seemed to us that some of her planted trees were missing.

Big Question: If Thomas’ bank restoration was successful, why did she need the taxpayers to restore her bayoufront property all over again? Well, said Thomas, there were still problems on either side of it.

Why the BPA thinks this testimony should persuade us to bulldoze our riparian forest in and around Memorial Park is a mystery. One property owner with a serious conflict of interest shows us her clear-cut bank that washed out eight years ago and that has already been fixed. We asked the BPA representative, Steve Hupp, if he had any other photos to show of serious erosion problems current in the project area, and he waved his hand in the direction of some aerial maps projected onto a screen that showed some marsh and sandy areas created by the bayou over a period of nearly 100 years.

Nevertheless, the BPA has been sending around all over town these photographs and the testimony of Thomas, along with the same false and irresponsible claims made by Hupp at the meeting: that the bayou is drastically changing course, that the banks in the target area are eroding at the rate of one foot a year (we calculate an average of no more than 9 mm a year, if that), and that sediment from this small target area is clogging up the ship channel. (!) Please reflect that the amount of sediment from the project area is infinitesimal and may even be negative, since most of the sediment, according to the HCFCD’s permit application to the Army Corps of Engineers (warning: big pdf file), comes from upstream and some of that upstream sediment is naturally trapped in the project area by the riparian forest that the BPA and the county want to eliminate. Hupp said he didn’t have any figures on subtracting versus adding sediment. The riparian buffer in this natural area, by the way, is rated near perfect by the HCFCD in its permit application. See page 449.

Hupp, who is the water quality director for the BPA, also repeated the untruth that this boondoggle will remove bacteria from the bayou by removing that tiny amount of sediment. Hupp ought to know better. Dr. George Guillen demolished this argument at the Sierra Club presentation last Wednesday. You can remove all the sediment from the bayou, but the bacteria will still be there. Guillen is executive director of the Environmental Institute of Houston and an associate professor of biology and environmental science at UH-Clear Lake.

The fact is that this pointless destruction project, which was sold to the City of Houston as a water quality improvement project, will not improve the water quality of Buffalo Bayou at all. You can read that conclusion in the county’s own permit application. See page 452.

This long-festering bulldozing project is nothing other than a flood control channelization project without the concrete, commented Richard Hyde, a longtime defender of the bayou who was in the audience and who has fought this battle before.

But it has curves! responded Hupp.