Can An Urban Stream Restore Itself?

Yes, With Room to Move. Free Rivers Are Healthier and Better for Flood Control

This article is adapted from a presentation made at the Southwest Stream Restoration Conference in San Antonio, Texas, on June 2, 2016.

Save Buffalo Bayou is a non-profit organization founded two years ago to fight a public project described as a “restoration” project on one of the last natural stretches of Buffalo Bayou as it flows through the middle of Houston, past 1,500-acre Memorial Park and another 15-acre public nature preserve, the Hogg Bird Sanctuary. Since then our organization has expanded into broader, related issues. But today’s topic is restoration. 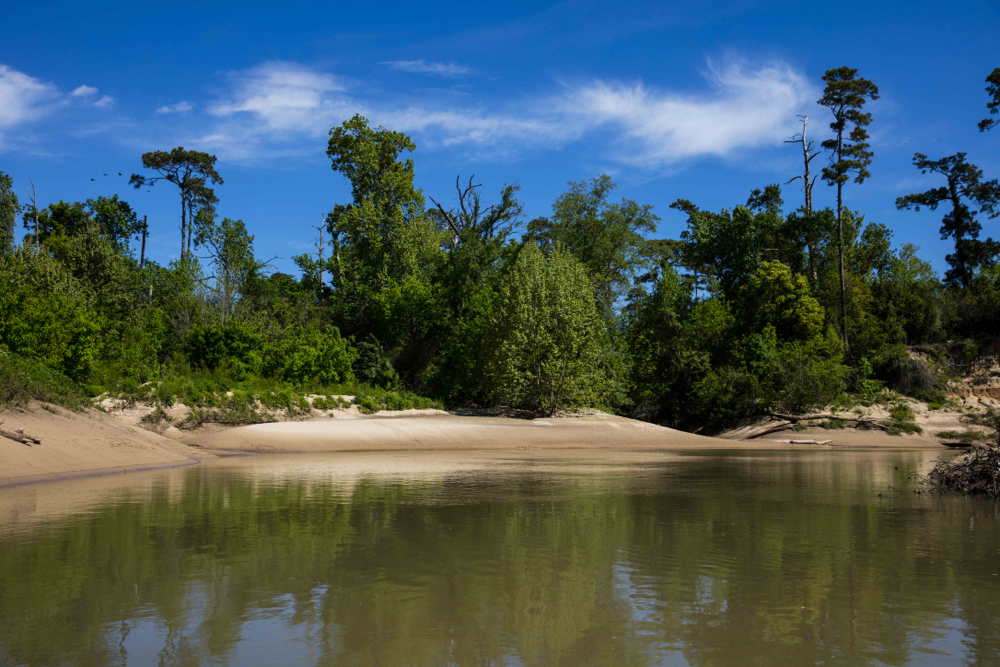 Sandy bank on a meander of Buffalo Bayou in Memorial Park. Photo by Jim Olive on April 2, 2016

The river’s not natural because the river changes.

It’s not natural because it’s been altered by high runoff from urbanization.

Trees fall into it.

It has terrible erosion problems. Look at those steep high banks!

It’s eroding terribly. Sediment from the banks in Memorial Park washes up on the sidewalks of Buffalo Bayou Park we built downstream in the floodway right next to the river.

All that sediment carries bacteria. If we stop the banks from eroding so much sediment, we will reduce the bacteria. (Although sediment-laden Buffalo Bayou is less polluted than White Oak Bayou, which runs relatively clear and extremely foul due to being encased in concrete.)

And of course the big one: the river needs to be stabilized because it moves around.

Then there’s the argument, both implied and explicit, that prompted me to select this topic for presentation today: an urban stream cannot restore itself.

A Profound Misconception About How Nature and Rivers Work

All of those statements, of course, indicate a profound misconception about nature, about how a river works and how rivers benefit us.

A river is a living symbol of change. A living system. A dynamic process of nature that works for our benefit. Even the simple grains of sand work on our behalf to cleanse the water.

To be fair, I should add this complaint:

It’s eroding terribly, the golf course is falling in. (That would be on the high south bank opposite Memorial Park where a country club cut down the trees, killed off the vegetation, and mows and waters the grass up to the edge, among other things. An excellent example of not Best Management Practice for a riparian area.)

The country club armored its bank with riprap in two places late last summer. Hardening the bank, as most of you well know, is one of the most damaging things you can do to the ecological health of a stream. Not to mention what it does to your neighbors up and downstream and across the way.

Another complaint: the Hogg Bird Sanctuary is falling apart.

What is the Goal of Restoration?

In order to answer the question of whether an urban stream can restore itself, we first have to ask: what do we mean by restore?

Now there are projects in places like Seattle in the Pacific Northwest and elsewhere where urban stream restoration can mean ecological restoration, focusing for instance on the microorganisms in the streambed and the water below ground. But all too often, what is meant by restoration is stabilize. Stop the river from moving. Stop the channel from shifting. Stop the banks from eroding.

From our point of view and that of many scientists, stabilizing – or attempted stabilizing — is killing the river. A river, in order to be alive, in order to be healthy, to be biologically diverse, to serve its purpose of cleansing the water and sustaining life, needs room to move. In order to restore itself and adjust to floods and high flows, a river has to move.

Not that Buffalo Bayou has shifted that much.

Known as the Mother Bayou, this 53-mile long central bayou is some 18,000 years old. The majority of all other bayous and streams in the region flow into it before it reaches Galveston Bay. And within recorded time — that would be topographic maps from the last hundred years – the bayou channel has shifted very little. In large part due to those high cliffs, part of the Pleistocene-era (really old) Meander Belt Ridge, that act as stabilizers, bumpers, on all our west to east moving streams in the Houston area. 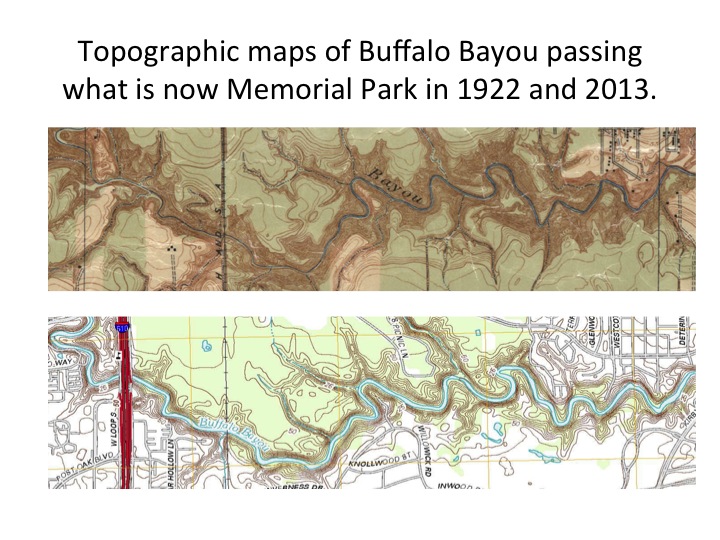 The scientific literature is replete with rebuttals to the common complaints about erosion and shifting and movement of sediment that I mentioned above.

But let me quote first of all Texas’ great Steve Nelle, wildlife biologist and natural resources specialist. In February 2013 he wrote about erosion in his excellent series, Riparian Notes, focusing in part on myths about rivers. This myth about erosion, he wrote, is pervasive.

“… Vertical eroding cut banks are not always bad. Often time they are beneficial.  Cut banks normally occur on outside bends where energy and stress is greater. … Erosion on cut banks is “good” when the eroded soil material is carried downstream and deposited on the opposite side, forming point bars on inside bends. … We must learn to grit our teeth and let the ugly work of bank erosion do its job.”

Erosion As Part of the Repair Process

What does this mean? It means that eroding banks, sediment transport and deposition, shifting meanders are in fact a part of the natural repair and restoration process. Nelle doesn’t call the impacts of droughts and floods “damages.” He and other scientists refer to those changes in a river caused by droughts and floods as “disturbances,” disturbances necessary to the vital function of a stream.

“Disturbance is often the prerequisite for change in nature,” Nelle wrote in a Riparian Note of January 2013.

“Static banks are not the norm, and static rivers and streams do not sustain ecosystems,” wrote Joan Florsheim, Jeffrey Mount, and Anne Chin, the authors of a June 2008 paper in Bioscience titled “Bank Erosion as a Desirable Attribute of Rivers.”

Florsheim et al pointed out that the all-important riparian plant succession, the natural sowing by the river of the plants that fix and build the soil and prepare the sandy banks for future forests, is “initiated with the establishment of patches of seedlings that favor bare substrate created during floods.”

Room for the River to Heal

In order for an urban river to heal itself, however, it has to have room to move. It also has to have sediment and occasional high flows. It has to have time. And we have to have patience.

Mathias Kondolf of the University of California, Berkeley, and one of the world’s leading river experts, wrote a 2011 paper titled “Setting Goals in River Restoration: When and Where Can the River ‘Heal Itself’?” Kondolf said that “allowing the river channel to ‘heal itself’ through setting aside a channel migration zone, or erodible corridor, is the most sustainable strategy for ecological restoration.”

In Europe this concept is known as l’espace de liberté, or the erodible corridor or fluvial territory or “room for the river.” In the United States it’s referred to as the channel migration zone or the conservation area.

Watch this slideshow of the progress of a south-facing high bluff in the Hogg Bird Sanctuary, self-repaired by Buffalo Bayou following severe slumping during and after the May 2015 and April 2016 flooding and extended high water releases from the upstream dams. The slumped slope, which took out a gravel path, was in the process of naturally rebuilding at no cost, using brush and collected sediment, and now resembles the slope that the Harris County Flood Control District wanted to build with bulldozers and millions in taxpayer funds in the Memorial Park Demonstration Project.

Fortunately, on Buffalo Bayou as it passes by Memorial Park, the river does have room to move. The healing process requires not just time and patience, however, but also understanding on the part of the public and public officials about what is going on. It may not look pretty right away. But then neither do the much more costly and constantly failing “restored” banks of the park downstream. A park that was foolishly premised on the idea that the banks can be fixed in place, that the bayou will remain the same, that it won’t ever try to change, that it would never shift its banks in response to changes in its energy and flow. And we have seen this year and last that we have had and will continue to have record high flows in our bayous and streams.

But what if there isn’t room in an urban area for the river to move? What if homes and parking lots and apartment buildings are already built too close to the bank and the banks are falling away?

Room for the River to Flood

Increasingly in the United States and around the world, even in the flat, below-sea-level Netherlands, people are making room for their rivers, recognizing that a channel migration zone or erodible corridor is more practical and effective for flood control, that it is more beneficial and cost-effective to buy out properties that flood and allow room for rivers to erode, adjust, and widen themselves. Creating public parks along these self-restoring waterways, true bayou greenways, is an added social benefit. While putting this concept into practice is easier in rural areas like along the Missouri River, Harris County has an existing buyout program.

Recently Flood Control District Director Mike Talbott told the Houston Chronicle that buying up and tearing down properties to widen our waterways to handle increasing storm water could cost $26 billion. A transition committee report to Mayor Sylvester Turner on Rebuild Houston, the city’s controversial drainage program, concluded that “major upgrades” need to be made to our bayous, streams, and tributaries in order to expand their capacity to handle storm water (page 17). We hope and expect, for the sake of the health of our waterways, our own well-being, and the public purse, that these officials are talking about creating room for our waterways to move, and that rather than bulldozing and dredging, our leaders will have the vision and common sense to allow this widening and “expansion” to occur naturally.

“Widening the channels themselves usually results in channel instability, and the wider channels do not maintain themselves, as the river cannot maintain such an artificially expanded width, and sediment deposits within the channel,” University of California, Berkeley Professor Kondolf wrote in an email last fall. “This then requires expensive dredging and an endless cycle of ‘serial engineering’ – in which each engineering intervention produces a reaction, which prompts another engineering intervention, and so on.

“Rather than a wider channel, what is needed is a wider river corridor.”

The river, a bayou, will still do what it needs to do. Failure to understand this can lead to “undesirable secondary effects,” as one scientific paper put it. (Page 7.)

But the fact is that in an urban area, with enough space to run freely, a river can and does restore itself. A free-flowing river is always in the process of restoring itself.

4 thoughts on “Can An Urban Stream Restore Itself?”