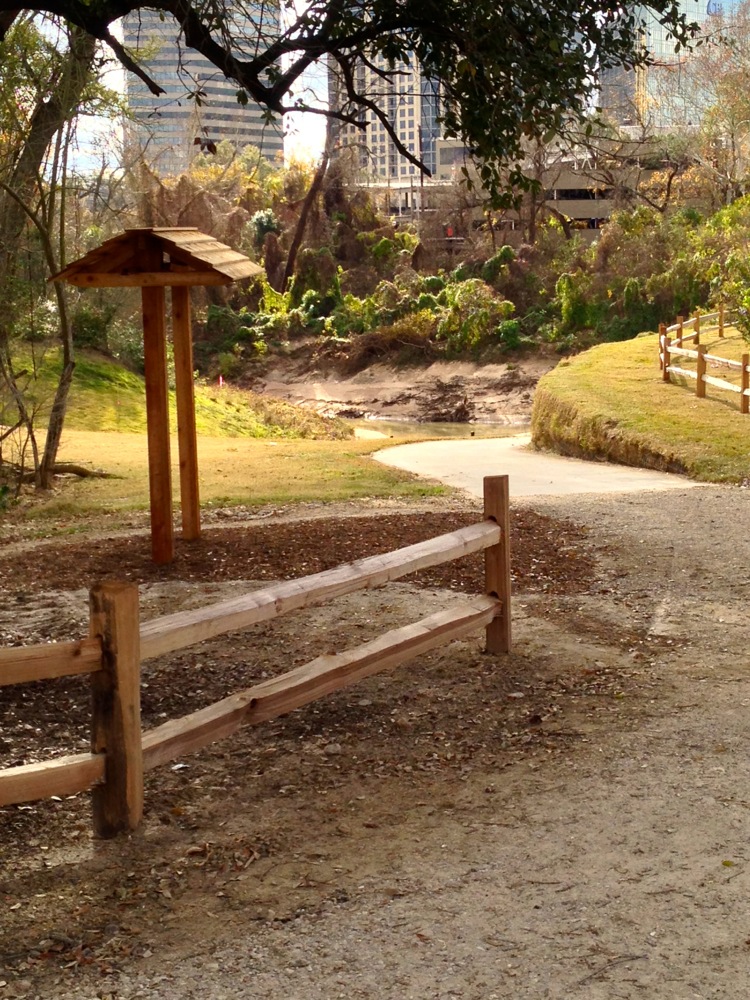 The $1.36 million Post Oak Road drainage project, planned and paid for with taxpayer money through the Uptown TIRZ, was completed in early 2014. The once-popular boat launch provided the only formal access to Buffalo Bayou through the park and through the historic natural stretch of our 18,000-year-old bayou proposed for destruction and “restoration” by the Harris County Flood Control District and the Bayou Preservation Association. But the launch as well as that entire section of the park west of Loop 610, known as the Old Archery Range, remained inexplicably closed. Closing public access to a navigable stream through pubic land for nearly two years after the drainage project was completed appeared to be a violation of our state constitution. Finally in August 2015 the Uptown TIRZ announced a $219,272.10 plan to open the locked gate, take down the construction fencing, put in decorative fencing and a parking lot (where there had once been a parking lot), and open the launch by mid-December.

It’s open now and although not quite finished, they’ve done a pretty tasteful, practical job of it. The simple wooden railings and gravel parking lot are to be commended. Not so the shiny black metallic fence posts leading down to the river. A natural matte color like green or brown would have been less jarring and more appropriate. Also, why are they mowing the grass on the banks? That’s not only a waste of public funds but also inappropriate for erosion control on riverbanks. Erosion control was the ostensible (if misguided) purpose for taking down the trees and vegetation and installing the massively enlarged drainage outfall. Let the trees and nature take over again! Memorial Park is supposed to be a nature experience.

At least here you can park your vehicle and have room to carry your boat down to the water. Other boat launches in the recently opened and badly eroding Buffalo Bayou Park downstream are not so well designed. There are at least five boat launches on the bayou between Shepherd Drive and Allen’s Landing. (For some reason the official Buffalo Bayou Partnership guide to that popular park has not been updated to include the boat rental and launch at Lost Lake near Dunlavy Street.) Two of these “boat launches” have no place to park and load or unload a boat. And two of them, including the main boat launch at Lost Lake, are so hemmed in by thoughtlessly designed, zigzagging narrow stairways and handrails that it’s difficult to carry a boat to and from the water.

The landscape designer for Buffalo Bayou Park was SWA Group, and it was a principal of SWA Group, Kevin Shanley, former president of the Bayou Preservation Association, who conceived and promoted the idea of bulldozing and landscaping the wild bayou flowing past Memorial Park using the controversial Natural Channel Design methods that are failing in Buffalo Bayou Park.

For the moment the Woodway boat launch is a fairly decent example of understatement, simplicity, and usefulness. (Watch out for the mud.) Be warned, though, that the Uptown TIRZ, the parks department, and the Memorial Park Conservancy have expensive plans to develop the area and put up ugly and uninviting walls made of inappropriate Central Texas limestone.

Watch this brief slide show of photographs taken Jan. 19, 2016, of the once-again boat launch in the Old Archery Range in Memorial Park. 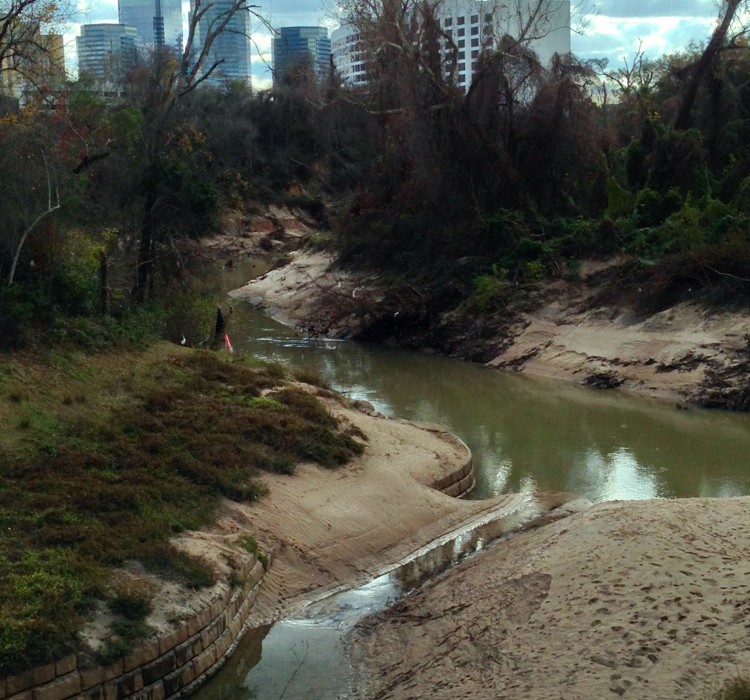 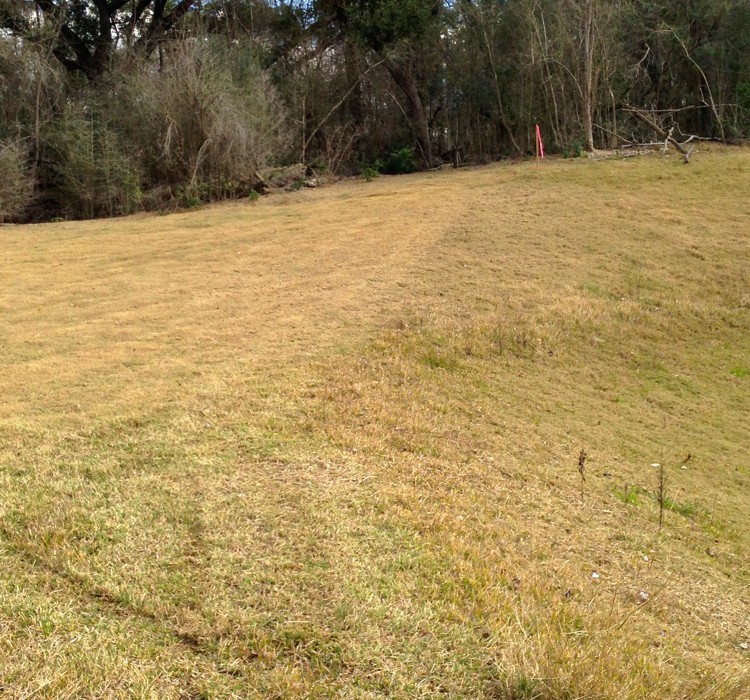 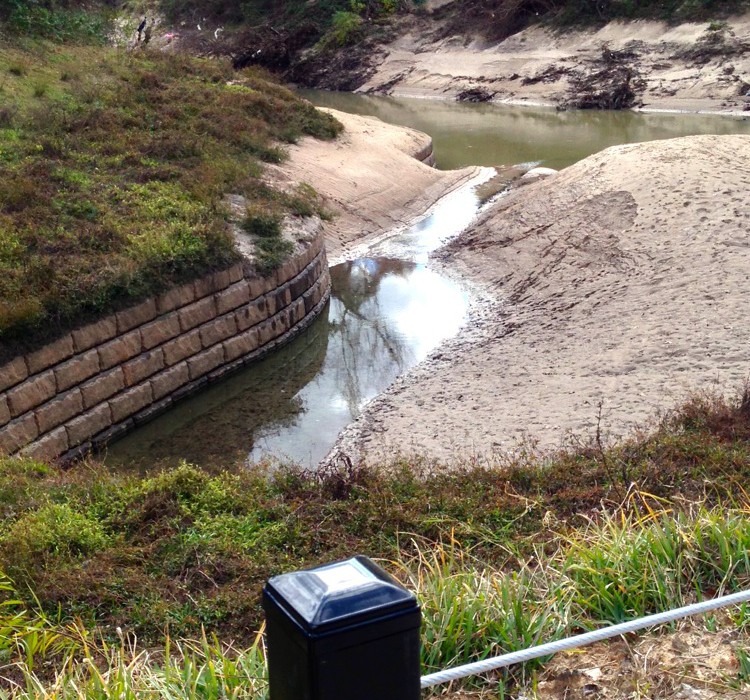 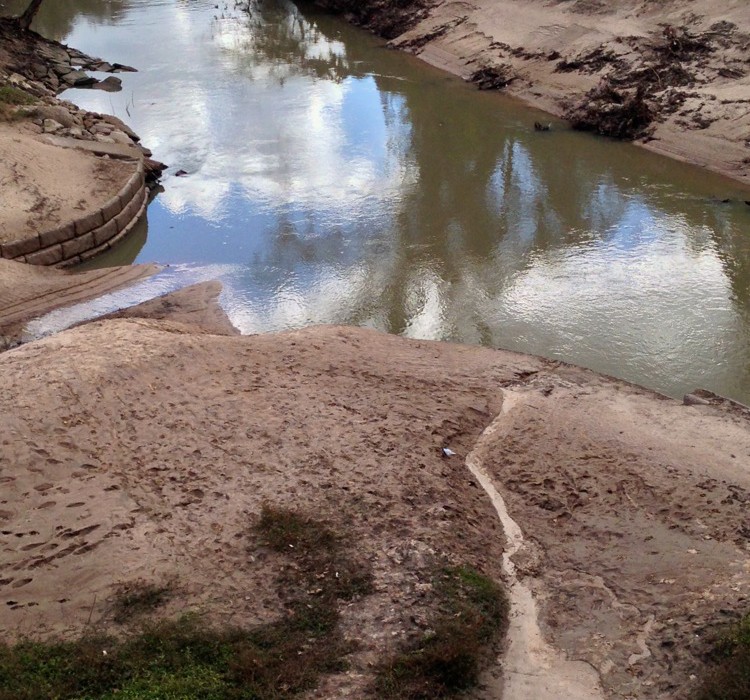