Native, edible amaranth in the foreground planted by Buffalo Bayou on the bank of the Woodway drainage outfall. Smartweeds, snoutbean, and other plants, mostly native but also some invasive, in the background. Native plants like amaranth and smartweed stabilize the soil and help prepare for new forest growth.  Non-native Bermuda and St. Augustine grasses planted by contractors. Photo Aug. 28, 2015

In the meantime, the bayou has been busy flooding, filling in, replanting, and beautifying the badly designed outfall, floods being a necessary function for regenerating and reseeding the floodplain, providing food and habitat for wildlife.  The massive outfall was carved out of what has been known for decades as the Old Archery Range west of Loop 610 at the Woodway Bridge. In the nineteenth century, the sandstone ford there was known as Dutchman’s Crossing. This forested area of Memorial Park was surprisingly included in the TIRZ 16 when the zone was created in 1999 (see page 18), and a few years later the publicly-owned woods were closed to the public and the pathways ripped up. Documents creating the TIRZ 16 describe the public parkland variously as commercial, industrial, and undeveloped property. (See pages 20 and 22.) Alas, it appears that the enchanting woodlands area of the archery range behind the outfall/boat launch will remain officially closed. We’ll have more on that later.

Note that it is illegal to take or change the use of public parkland without a public notice and hearing.

The ugly, cavernous outfall, designed by AECOM, sends water shooting across the bayou, blocking its flow. The bayou in response has been depositing sediment and plants on top of and around the Redi-Rock cast-block banks of the grossly unnatural outfall and on the curving concrete “maintenance” road leading down to it. (Would it be too much to ask for engineers and designers to attempt at least to mimic the surrounding nature in our public parks?)

Fortunately, whoever has been scraping up the mud collecting there (Breeding didn’t know) seems largely to have given up. In fact the mud-scraping seems to have been mostly confined to the maintenance path itself. In other words, it was the maintenance road, too narrow for a regular vehicle, that seemed mainly to need maintaining.

To his credit, Assistant Parks Director Rick Dewees once suggested a porous concrete grid maintenance path for the outfall, based on documents obtained by Save Buffalo Bayou through a Public Information request. Parks Director Joe Turner nixed this good idea in favor of an impermeable concrete path that needed to be cleared of mud – nixed because concrete is what flood control uses, according to the documents. 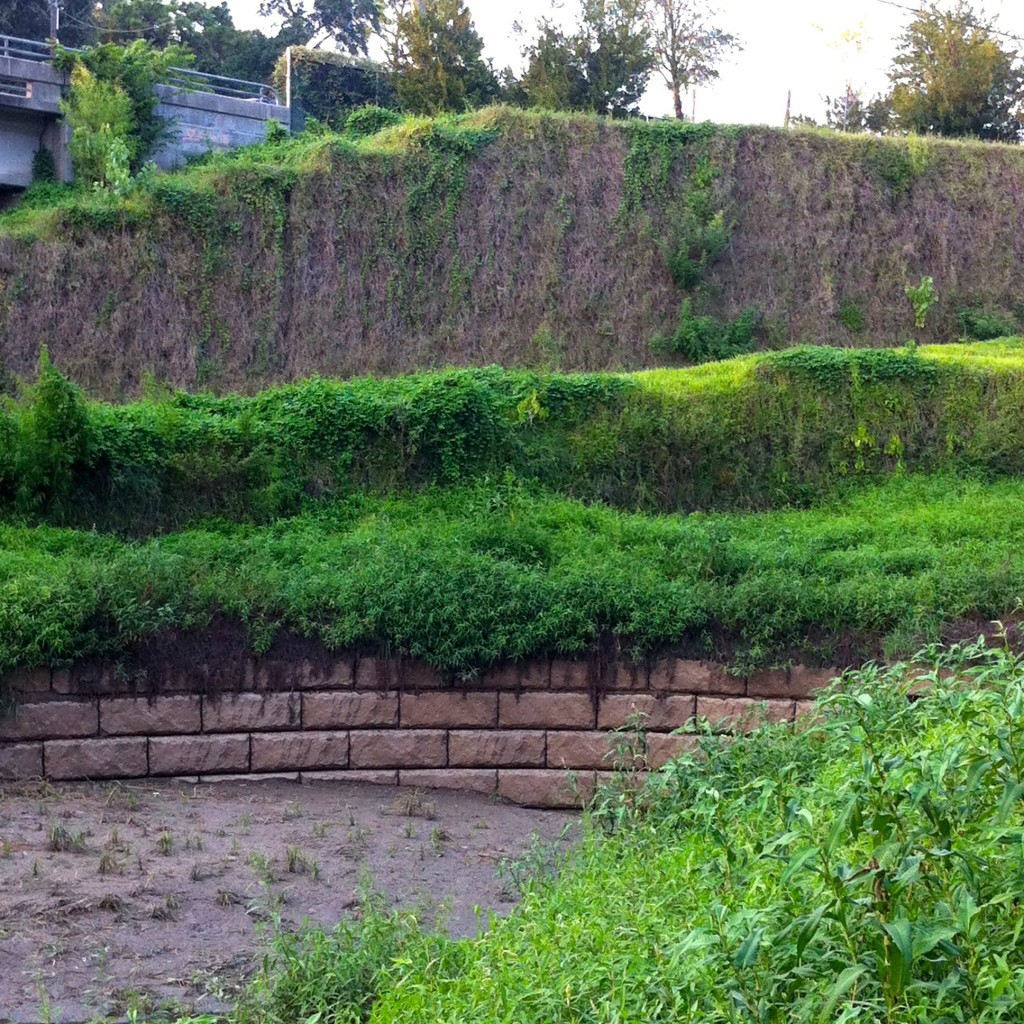 Natural landscaping by Buffalo Bayou of ugly drainage outfall with native plants that stabilize the soil. Dead plant on wall is non-native Bermuda grass planted by contractors. Split-rail fence will go along top of wall. Post-and-cable handrail will go along incline leading to outfall. Photo Aug. 28, 2015

This area of the park at Woodway is the beginning of the park that borders on Buffalo Bayou, and from here the bayou flows along the entire southern edge of the park, including the Arboretum and the Hogg Bird Sanctuary. This closed public access point (you can still enter from under the bridge) allowed the public to float through the lovely historic natural area slated for destruction by Harris County Flood Control District’s “erosion control” project, known as the Memorial Park Demonstration Project, a project instigated and promoted by the Bayou Preservation Association. It is one of our last remaining natural stretches of Buffalo Bayou in Houston.

Bayou Doing What It Will Do: Landscaping a Nature Garden, With the Help of a Flood

It was the maintenance road, according to statements from Parks and TIRZ last November, that needed a guardrail to protect the public from the edge of the declining five-six-foot embankment while strolling down the gently-sloping bank to inspect the huge ugly drainage outfall and the bayou flowing past it. Or members of the public who more likely might eventually once again be carrying canoes and kayaks back and forth from the parking lot to the paddling trail takeout. Now, in a few months, the concrete path will have a low post-and-cable railing that is not so much a guardrail but may “keep dogs from jumping over,” said Breeding.

There will also be a low split-rail fence inside the oak trees planted parallel to Woodway, which sounds nice and unobtrusive; a simple barrier gate to keep cars out at night, new loose gravel for the old loose gravel parking lot. And the park informational kiosk will be restored.

We did notice a lot of dog-prints in the mud last weekend when we visited with native plant specialist Katy Emde. Also some raccoons. 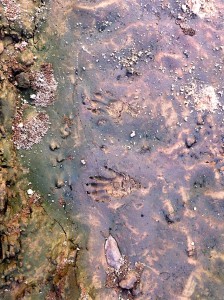 Raccoon tracks in the mud in Memorial Park at Woodway. Photo taken Aug. 28, 2015

The “erosion control/outfall” was an ugly wound in the side of the steep banks of the bayou. The outfall project removed many trees and carved a huge gash in the banks, which were planted by the TIRZ contractors with St. Augustine and Bermuda grass, neither of them native. The high wall above the concrete maintenance path was also planted with draping Bermuda grass. It appears no trees were planted other than the oaks up near the roadway. Trees, it should be noted, are important for controlling erosion of the soil, and for slowing, deflecting, and filtering rainwater runoff, among many other functions. A forest, in fact, can have more stormwater detention capability than a detention pond.

But the whole area is much lovelier since the bayou flooded and took over the important task of landscaping. There was mallow, morning glory, and mustang grape draping over the high wall, all of them natives. Natives are important as host plants to sustain butterflies, moths, and many other insects, and also provide food for birds and other animals, explained Emde. “You get rid of that one plant, you get rid of that moth,” said Emde. “Some beetles also use only one host plant.”

There were large, lush green fields of tall amaranth, two species of smartweed (also known as pepper plant), ground cherry, purslane, and snoutbean, all nutritious native edibles eaten since maybe the beginning of time. “Lots of smartweed, so that’s good,” said Emde. Purslane, also known as verdolaga, is so nutritious and abundant it’s sold in markets all over the world.

We saw alligator weed, a noxious edible invasive that looks similar to smartweed. No local creatures eat it, and without predators it crowds out the valuable native plants, so eat it up.

There was giant ragweed, an important bird food that like the other native plants, is also important for holding and building the soil, preparing the way for larger plant growth and eventual forest. There was late-flowering boneset (“Bees, moths, butterflies, wasps: everybody loves it”), tiny sensitive neptunias (touch-me-nots), asters, goldenrod, frogfruit, water willow, water primrose, Amberique bean (all good) and Vasey grass (bad) and nutsedge (also bad).

Also volunteering were baby black willows (“Willows are host plants for over 450 species of moths all over the United States,” said Emde), box elders, and possibly some ash seedlings.

We hope the new contract work will respect this nourishing natural landscape created by the bayou in support of the riparian ecosystem.

As an interesting side note, we’d like to point out that while the Memorial Park Conservancy has been struggling to remove the widespread invasive ligustrum behind the fence in the archery range, the City is planting ligustrum around a utility box outside the fence.

The Houston Chapter of the Native Plant Society of Texas is hosting a Wildscapes Workshop and Native Plant Sale on Saturday, Sept. 19, 2015, from 8:30 a.m. to 3:30 p.m. at the Houston Zoo Brown Education Center, 6200 Hermann Park Drive. Click here for information on how to register.

Watch this slide show of the evolution of the Memorial Park Woodway erosion control/drainage outfall completed in April 2014.