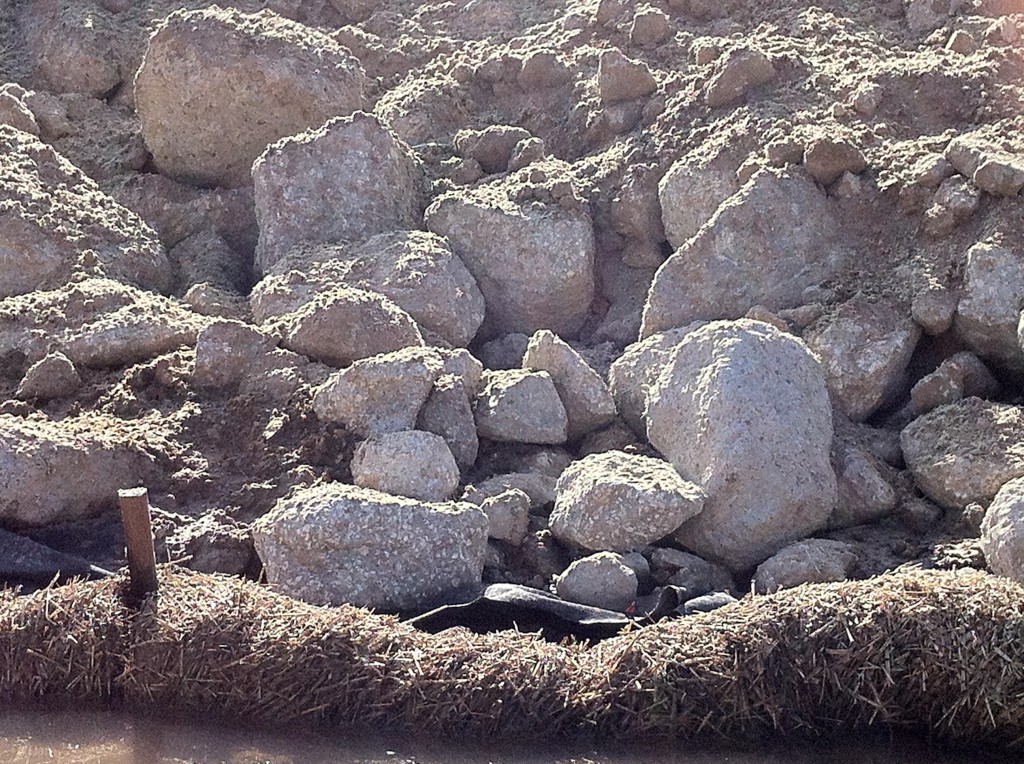 Most of the north bank of the project is public park, including the natural banks of Memorial Park and the Hogg Bird Sanctuary, which would be largely destroyed by the project along with the bayou’s ecosystem. The district’s plan is to scrape some 80 percent of the riparian forest, grade and level the banks including high, very old cliffs and ancient sandstone ledges, and replant them with grass and other things still in the planning. The district would dredge, re-route and deepen the bayou (a section never before channelized), fill in a beautiful meander and cut a new channel through the forest, shortening the bayou.

Still Planning to Participate in the Bulldozing Project

Lindley said the club is still planning to participate in the flood control project, should the project ever receive a permit from the Army Corps of Engineers. The riprap armoring of the banks, which is one of the most environmentally damaging methods of erosion control  in addition to being really ugly and unnatural, is only temporary, said Lindley. If necessary, the concrete chunks can be reused in the demonstration project, Lindley said.

In its revised permit application to the Corps, the flood control district says that “… isolated bank armoring installed to deflect the erosive shear stress at the point of failure, in most cases, is scoured at one or both of its terminal ends, resulting in eventual failure. This type of armoring redirects stream energy to a new location downstream, creating a new point of stress.” (See page 3.)

The Negatives of Concrete Riprap

Here are some of the other negatives of riprap:

The Corps of Engineers is considering whether to grant a permit application for the project. In order to protect the health of our waters, under the federal Clean Water Act the Corps is responsible for projects that would dredge or fill navigable waters below the Ordinary High Water Mark, their tributaries, and adjacent wetlands.

Some of the club’s riprap and dirt appears to have fallen to the water’s edge, if not into the water, at very low flow, which would appear to be below the Ordinary High Water Mark. There are also wetlands near the foot of the banks being armored.

However, Lindley said the club was careful to keep the armoring above the Ordinary High Water Mark.

The club is one of some two dozen private country clubs in Harris County that receive millions of dollars in annual property tax breaks under the state’s Greenbelt Act. (See page 241.)

The Loss of the River Oaks

The high banks on the south side of the bayou were heavily forested until several decades ago when the country club began clear-cutting the mature trees and expanding the golf course up to the edge of the banks, mowing and watering the grass, and building a concrete path close to the edge for motorized vehicles. In the last year, in preparing for the renovation of the golf course, the club killed off most of the grass, including some remaining vegetation on the high banks now being armored, and began running heavy equipment over the grounds, including the high banks.

Unfortunately all of these activities violate Best Management Practices for riparian zones and likely helped to destabilize the high banks.

Watch a slide show of the evolution of the south bank of Buffalo Bayou in the proposed project area over the years.

5 thoughts on “The Piles of Concrete Came Down”