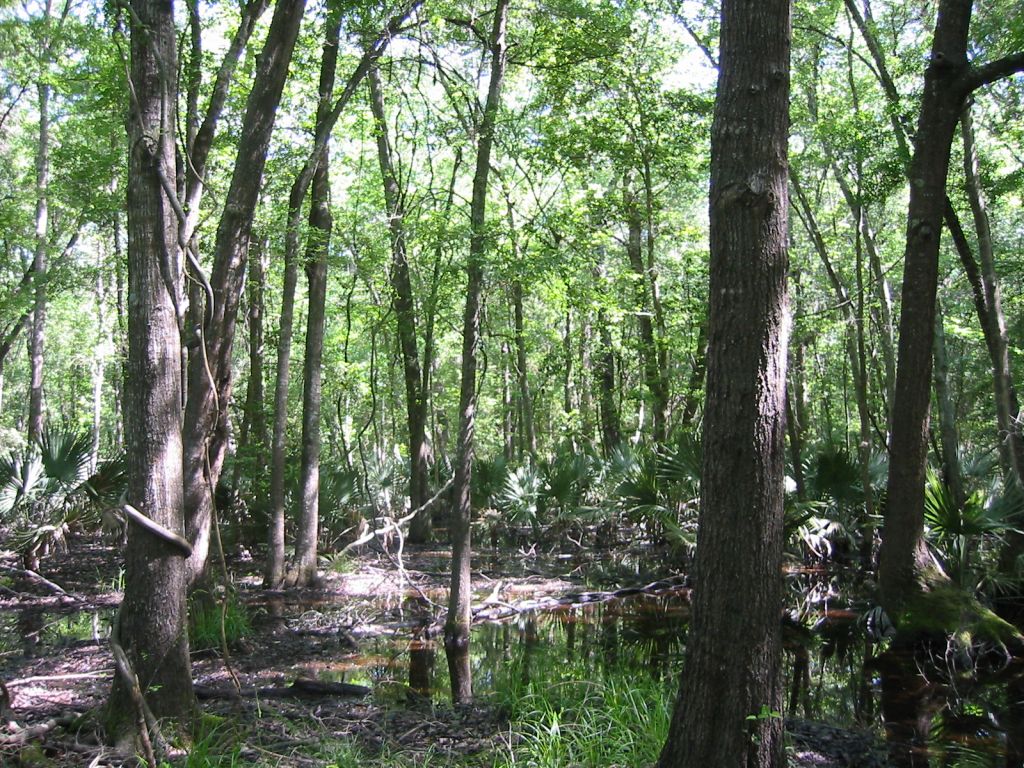 John Jacob, director of Texas A&M University’s Coastal Watershed Program, told Chronicle reporter Matthew Tresaugue that “the disappearance of wetlands [in the region] is widespread and pervasive.” Jacob’s watershed program worked on the study with the research center. “These are the wetlands that improve water quality and reduce flooding, but there is no mitigation [replacement],” Jacob told the Chronicle.

Jim Lester, president of HARC, based in The Woodlands, told the Chronicle that upstream development worsens downstream flooding. “It’s crazy to me that we cover up wetlands, and then we spend a lot of money to build retention ponds [to hold back flood water].”

Wetlands to be Bulldozed in the Memorial Park Demonstration Project

The Harris County Flood Control District has identified 28 wetlands with a total area of .78 acres in the stretch of Buffalo Bayou to be bulldozed for its controversial “erosion control” project, known as the Memorial Park Demonstration Project. Critics, however, say that the wetlands in the area are larger and more numerous than reported.

The nearly 1.5-mile long stretch of the bayou passes by Memorial Park and the Hogg Bird Sanctuary on the north (including a tributary in the sanctuary) and the River Oaks Country Club on the south. Home to beaver, otter, and a wide variety of wildlife, the section is one of the last natural stretches of the bayou remaining in the city. 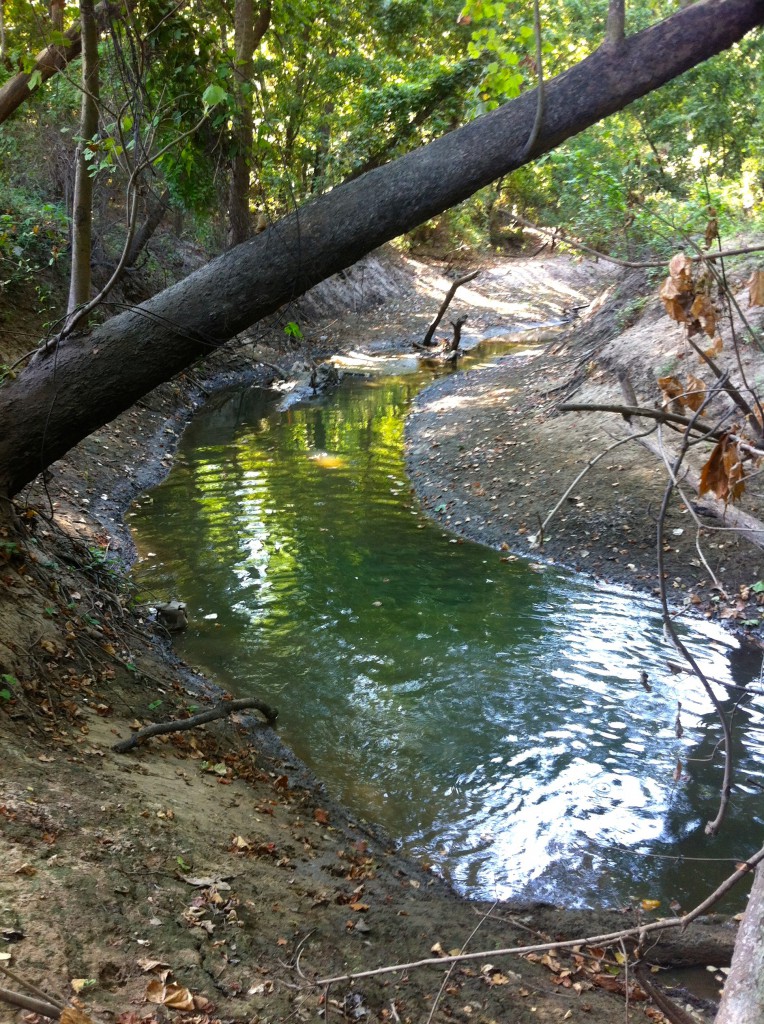 Tributary in the Hogg Bird Sanctuary to be “stabilized.” Photo taken July 31, 2015.

No Need to Replace Wetlands Because, says Flood Control

The Corps has authority over the $6 million bayou project because it involves federal waters (a navigable stream, including adjacent wetlands and tributaries). (Note that the State of Texas, along with Louisiana and Mississippi, filed suit in federal court in Houston on June 29, 2015, joining thirteen other states in challenging the EPA’s final rule, issued the same day, defining federal waters for enforcement of the Clean Water Act.) The flood control district, ignoring tributaries in Memorial Park, has stated in its permit application to the Corps that .61 acres of wetlands will be impacted by the project (page 11) and that the project will be “self-compensating” for wetland loss, i.e. they don’t have to mitigate because they are “providing an overall aquatic benefit” (page 14).

The district claimed in its application that it will plant .80 acres of wetland plants in the lovely middle meander, which is to be filled and graded, and that there is a “potential” for some two to eight acres of wetlands to emerge naturally and eventually sometime after contractors finish bulldozing, dredging, filling, and rerouting the channel and grading and replanting the banks of the bayou (page 14 of application).

Responding to criticism about these claims, the district essentially repeated them (see page 29 of responses).

Critics of the project include the EPA, the US Fish and Wildlife Service, the Texas Department of Parks and Wildlife, the Texas Commission on Environmental Quality, the Houston Sierra Club, and Save Buffalo Bayou, which opposes the project as destructive, wasteful, inappropriate, and unscientific, and likely to fail (see here also) and cause greater erosion within the project area and downstream.

The Corps, having received hundreds of public comments, the vast majority opposing the project, is currently deciding whether to issue a permit for it. The Texas Commission on Environmental Quality must also certify the project, which must also receive a floodplain development permit from the City of Houston.

Recently near the downstream end of the project, the River Oaks Country Club graded and “armored” with concrete rip rap a steep and eroding bank. The club over the years deforested the area to expand the golf course lawn up to the edge of the high bank and recently stripped away much of the vegetation during a renovation of the golf course, compromising the integrity of the bank. The armoring appears to have occurred near or over a wetland identified in the district’s permit application (wetland 9, page 119), and rip rap appears to have been placed or fallen below the channel line or Ordinary High Water Mark, which describes federal jurisdiction. 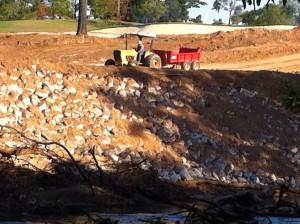 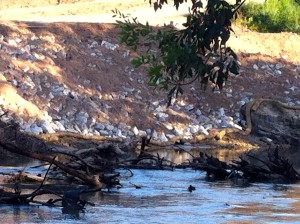 Closer look at rip rap and dirt in Buffalo Bayou on July 31, 2015, when water level was low, below two feet.

The Corps says it is investigating. The club owns the entire south bank of the project area and is paying $2 million or one-third of the cost (taxpayers are contributing the remaining $4 million). The flood control district says the club is still participating in the demonstration project, which, though destructive and misguided, was at least advertised as “demonstrating” to property owners methods of erosion control more effective and less environmentally damaging than rip rap.

Read the full story about wetlands in the Houston Chronicle.