This expensive, invasive plan is called the Memorial Park Demonstration Project, and the U.S. Army Corps of Engineers is now considering whether to issue a permit for it. Citizens have only until May 30 to submit comments. We urge you to ask the Corps for a 60-day extension of time to submit comments on the damage this badly planned project will do to our bayou and park. (Visit our website, SaveBuffaloBayou.org, for information about how to contact the Corps and what you can do to help.)

River science tells us there are better and cheaper ways to control erosion and help Buffalo Bayou without destroying the bayou’s unique ecosystem and turning it into an ordinary ditch. 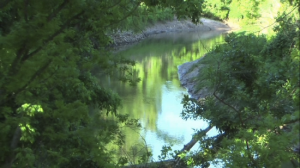 Buffalo Bayou at sunrise as it flows past Memorial Park on the left and River Oaks Country Club on the right. Photo by Frank Salzhandler.

Memorial Park, a 1,500-acre wilderness, is one of the largest urban parks in the country and includes the Hogg Bird Sanctuary, a public treasure. Here, the 18,000-year-old Buffalo Bayou winds through a unique bioregion of three intersecting ecosystems of forests, meadows and wetlands. Within these ecosystems are 85 species of mammals, reptiles, amphibians and fish, 167 species of birds and 102 varieties of trees, shrubs and vines.

Our urban bayou is home to red-tailed hawks, snowy egrets, great blue herons, and more. Beaver swim the waters in the early morning. This wild region of our city, open to everyone, is part of the Great Texas Coastal Birding Trail, and the bayou is an official Texas Department of Parks and Wildlife paddling trail. Birding and other ecotourism are a major industry in Texas, drawing people and outside dollars from all over the world to Houston.

The threat in Memorial Park is only the beginning. The Harris County Flood Control District calls the plan a “demonstration project” because the county intends to use this disputed, heavy-handed method on the natural landscape of Buffalo Bayou in neighborhoods upstream, areas saved from the same fate decades ago by dedicated Houstonians such as George H.W. Bush, Army and Sarah Emmott, Terry Hershey and George Mitchell.

The flood control district’s “erosion control” project affects 6,600 feet and nearly 14 acres of bayou, as well as a significant portion of the Hogg Bird Sanctuary. The original but growing cost of $6 million is being funded by Houston and Harris County taxpayers and by the River Oaks Country Club, which has been convinced that the project will stop erosion of its golf course. Instead, the club will lose valuable forest and land.

Dr. Mathias Kondolf, fluvial geomorphologist at the University of California, Berkeley, describes the plan as “pseudo-science.” Projects using the proposed methods have failed and washed out in other states, including Maryland, Washington and California.

Buffalo Bayou is a stressed river and needs our help. Re-establishing riparian forests alongside existing trees provides the most valuable stream bank stability and benefit for wildlife and natural habitat.

Harris County has bulldozed virtually all our other bayous, which are now mostly mowed monoculture ditches. A river system like Buffalo Bayou within the city of Houston is unique in the United States and enhances our quality of life. We urge Houstonians to oppose the current plan.

Hershey is a poet, novelist and environmentalist. Salzhandler, director of the Buffalo Bayou Project and the Endangered Species Media Project, is chair of the Natural Heritage Program for the Harris County Historical Commission.