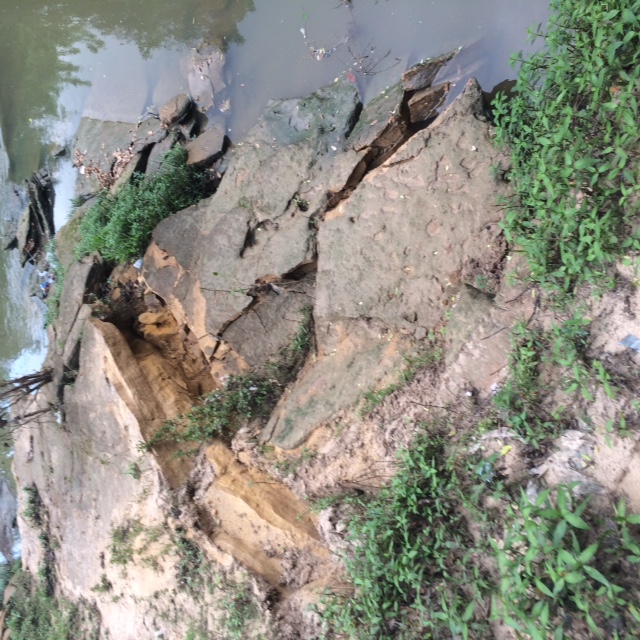 The $6 million project proposes to strip the riparian forest from more than 80 percent of 6,260 linear feet on both sides of one of the last natural stretches of Buffalo Bayou, including a tributary of the Hogg Bird Sanctuary, running through the center of Houston. This historic natural section of the bayou would be dredged, graded, shortened, rerouted, channelized, and landscaped, its historic bluffs and sandstone formations obliterated. Most of the north bank of the project is public land—Memorial Park and the Hogg Bird Sanctuary. The entire south bank of the project is owned by the River Oaks Country Club, which is contributing $2 million towards the $6 million cost, with Houston and Harris County taxpayers paying the rest.

Also not included in the total damage estimate is the forest area to be destroyed by access roads and storage areas to be bulldozed through the park and along the banks, including “No Work Zones,” above the Ordinary High Water Mark, which is technically outside the Corps’ jurisdiction.

First privately proposed by the Bayou Preservation Association in 2010 under then-BPA Chairman Kevin Shanley, principal with the landscape architecture firm SWA Group, the project was developed through a series of private meetings with the BPA, the Memorial Park Conservancy (MPC), supportive private landowners in the project area including the River Oaks Country Club (at least two individual landowners also members of the BPA and the MPC), and the Harris County Flood Control Task Force.

However, the plan has been widely criticized since it was first revealed to the public in 2012–only through a Public Information request from the Houston Sierra Club. The flood control district, disguising the project as a water quality improvement project (which it still does) initially attempted to obtain what is called a streamlined, fast track Nationwide Permit that would have exempted the district from informing the public about the project. Thwarted by the Sierra Club and others, the district was forced to seek an Individual Permit, hold public meetings and seek public comment. The district presented the completed plan during a public meeting in December 2013, and the project has remained virtually unchanged since its inception. Comments received by the Corps during the initial public comment period last May and June were overwhelmingly negative, including those from the Texas Commission on Environmental Quality, the Environmental Protection Agency, Texas Parks and Wildlife, and the US Fish and Wildlife Service. But these criticisms too have had little apparent impact on the project.

Except for Some Changes Requested by Private Property Owners

There have been a couple of changes to accommodate private property owners on the north bank. The accommodations to private property owners include filling in the oxbow-wetland that would be created by cutting off a lovely meander in Memorial Park and rerouting the bayou further south. The complaint, as reported by the flood control district in its October response, was that this wetland area on public property, if left unfilled, might collect trash and harbor mosquitoes. (Oh, nooo! But what about the beautiful dragonflies that eat the mosquitoes? Unless the dragonflies’ habitat is destroyed.) Another favor to a private landowner who has been promoting the project was the preservation of a large tree on her riverbank, visible on the project plans.

What is the Point?

Among other things, critics have questioned the necessity and purpose of the project, both of which remain unclear, as well as the amount of destruction proposed to remedy a problem that is largely unidentified. The project is described in the plans as an “erosion control” and “bank stabilization” project, as well as a “flood conveyance” project, using “natural channel design,” although somehow flood conveyance will be improved without increasing or decreasing the stormwater carrying capacity of the bayou, according to the flood control district. (See page 92 of HCFCD full responses in October 2014)

The public is also being asked to comment on the flood control district’s responses to comments previously made by the public and public agencies. These responses include a couple of odd claims.

For instance, in October 2014 the flood control district claimed that one-third of the total sediment load of 15,700 tons/year in Buffalo Bayou from Beltway 8 to Shepherd comes from this small project area! (A claim not included in the shorter more recent list of responses.)

In response to a question from the US Fish and Wildlife Service about “whether the scale of this project can have any measurable effect on downstream sediment loads, water quality, and habitat improvement,” the district claimed last fall that using “methods of dendrogeomorphology,” … the “project reach in its current unstable state produces an estimated sediment load of 5,491 tons/year.” (See page 23.)

And yes, there is a science called “dendrogeomorphology,” but as one of our experts points out, 5,491 tons of sediment per year from a 14-acre project area amounts to 393 tons per acre per year. That is about fifty times more than typical values for “severe” erosion on cultivated agricultural land. (We will be asking for the documentation behind this incredible erosion figure.)

The district in its initial permit application estimated that the entire project area produced a mere 359 tons of sediment. (See page 446.) 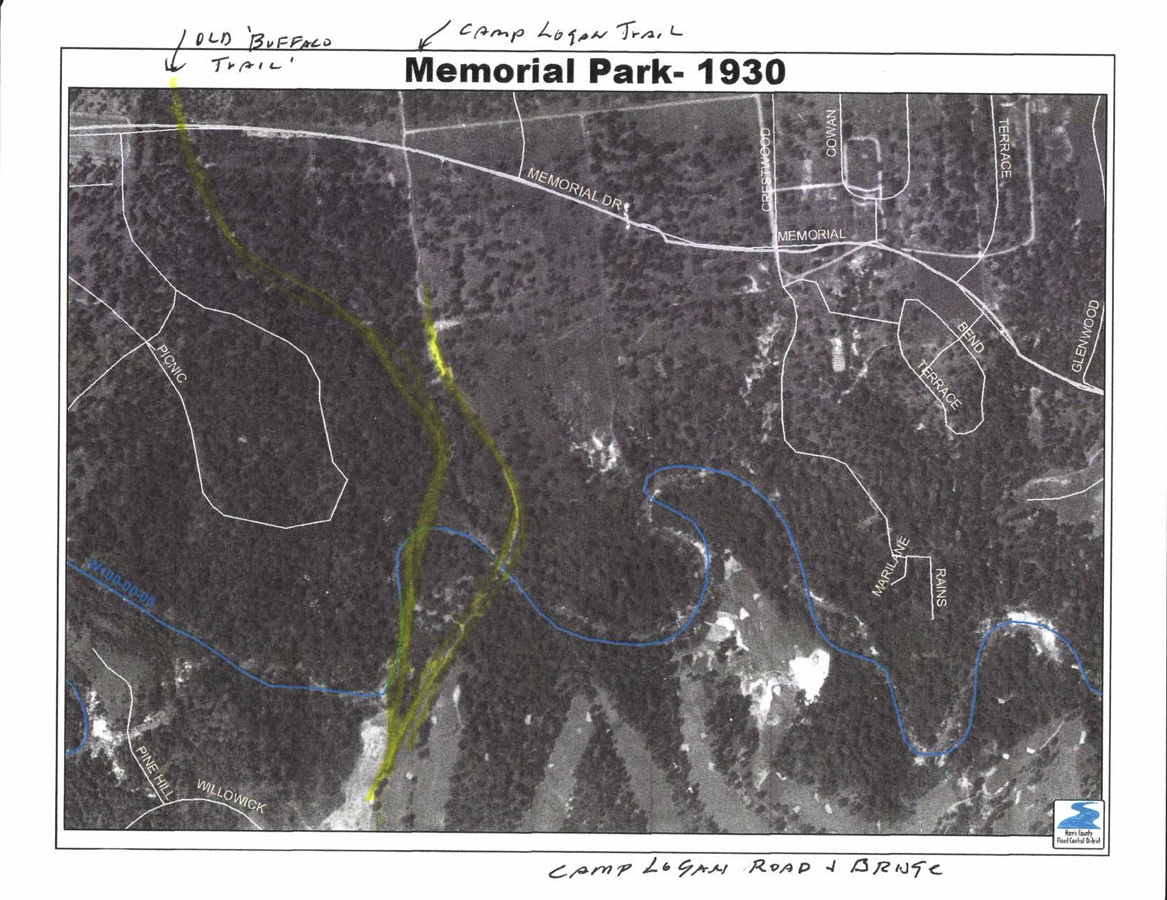 While the district admits that there are visible rock outcroppings outside the project area, the district claims that these “have recently become visible due to the erosion that has occurred (widening and deepening of the bayou) because the earthen material previously located around them has been washed away.” (Also p. 4.)

The district has to know this erosion claim is untrue, one of many exaggerations by the district and its ally, the BPA, as is the claim that the bayou is widening and deepening. Apparently the district is forgetting about the giant Rolligon truck it used to drive up and down the banks of the bayou decades ago in an effort to break up the sandstone ledges and crush the vegetation.

According to historian and landscape architect Janet Wagner, in her ample documentation provided to the Corps about the history, geology, and archeology of Buffalo Bayou throughout the length of Memorial Park, “in Memorial Park over four to six large sandstone rivulets can be found exposed along Buffalo Bayou. At least three were so large, they were named and utilized as late as 1917 by local residents and Camp Logan.” (p. 6 Folder 4, ACE comments.)

Wagner notes two well-known sandstone crossings that have been documented since the 1840s. “… Sandstone outcrops provided a hard base along the waterway for Native American as well as early travelers and are still visible in some areas of Memorial Park.” (p. 35 Folder 4 of 4, public comments to the Corps.) She provides a recent photograph.

Oh, but wait. No need for all that history. The flood control district does see the sandstone rock outcroppings in the project area after all. Or did. On page 124 of the October 2014 pdf listing its full responses to comments, the district says this: