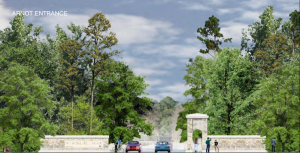 The Memorial Park Conservancy is a non-profit organization founded in 2000 as a successor to the informal citizens’ advisory committee that previously protected the park. Reportedly the conservancy will be asked to raise some $150 million for maintenance or capital improvements in addition to some $150 million contributed by the TIRZ, which by law can only spend money on capital improvements, i.e. building stuff. The Galleria-area Uptown TIRZ doubled its boundaries in 2013 by annexing Memorial Park and the Hogg Bird Sanctuary.

Apparently no one but members of the city council is in a position to say impolitely, no, whoa, wait! This plan is an outrage. We urge City Council to do that.

The final tipping factor for some of us, on top of an onslaught of increasingly bad ideas, was the tasteless proposal for large, offensive stone walls of Central Texas limestone at the entrances to the park and surrounding the inexplicably closed section of the park off Woodway west of Loop 610. (This enchanting part of the park, closed for something like a decade now and sometimes not even included in Memorial Park Conservancy maps, will remain closed until the master planners decide what to do with it, says TIRZ Memorial Park Project Director Sarah Newbery. And then, of course, we will have to wait for them do whatever they decide to do, which could take decades, if ever, since they would still have to raise the money to do whatever.)

Currently the park uses modest, understated wooden signage, and it should stay that way. Dry, heavy, light-colored Central Texas limestone is grossly inappropriate in every way for natural park settings in lush, humid, subtropical Houston, and unfortunately limestone seems to be increasingly in use in parks such as Buffalo Bayou Park downstream.

But there are greater offenses. The plan, developed by the New York/Charlottesville firm of Nelson, Byrd, Woltz, was supposed to respect the park as a natural park, set along the riparian wilderness of Buffalo Bayou.

Instead we have a proposal for numerous encroachments and destruction of what little natural area we have remaining, with significantly increased maintenance costs at a time when the city cannot even afford proper maintenance of the park now. The over-reaching plan tries to do too much for too many people, and frankly at times the planners seem to not know what they are doing. The plan proposes the removal of a large but unspecified number of trees for the creation of prairie and savannah and the planting of new trees (and plants), shockingly some of them either not native to Texas at all or not native to this area or even to the United States. (The $14,000 landscaping of the new Running Trails Center with non-native plants, including dog-toxic sago palms, does not inspire confidence. Nor does the impermeable parking lot. Are we thinking about runoff, drainage?) The list of wildlife species in the area is also filled with errors.

Memorial Drive will be turned into something like New York City’s Holland Tunnel by a land bridge connecting the north and south parts of the park, and further west the drive will be moved at great expense and loss of forest. There will be less woodlands and more parking lots, history displays, playgrounds, obtrusive gateways, observation towers, planted gardens, a dizzying inter-looping array of tracks for slow runners and fast runners, bike tracks for children, bike tracks for families, tracks for mountain bikers, racers; hikers and horseback riders, many more inter-looping trails, including a twelve-foot-wide concrete semi-circular roadway in the southern “nature area” near the banks and ravines of the bayou. And some hundred acres of prairie and woodlands will be planted with oppressively rigid, regular rows of pine trees. That’s just a sampling.

Houstonians need places to get out and exercise, picnic, swim, play ball, jog, and ride bikes. But they can’t do it all in one place. We need more public parks, swimming pools, athletic fields, places to ride bikes, walk our dogs, and we need more trees. Memorial Park is already the thirty-sixth most visited park in the United States, just edging out Centennial Olympic Park in Atlanta, according to the Trust for Public Land. It should be treated gently and respected as a subtle park with rare urban wilderness areas that was always intended to be as natural and unbuilt as possible.

Let’s come up with a plan for that. Sort of like the master plan they came up with in 2004.

The Memorial Park Conservancy, by the way, supports the $6 million project to strip, scrape, dredge, fill, reroute, create a new channel and landscape one of the last natural stretches of Buffalo Bayou, including magnificent very old cliffs, as it flows past the park and the Hogg Bird Sanctuary. But the conservancy strangely states on its website that it has “no plans to channelize” the bayou. Arnold explains the contradiction in an email by saying that stripping, scraping, dredging, filling, rerouting, creating a new channel, etc., is not “channelizing” because it does not “strip, straighten, and concrete” the bayou.

7 thoughts on “The Blinged-Out Master Plan for Memorial Park”