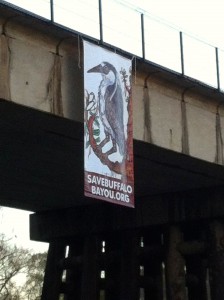 In addition, the project demonstrates to property owners on the bayou exactly the wrong thing to do for erosion control. Property owners have problems with erosion when they remove trees and plants, known as the riparian zone, that protect the banks from eroding. Riparian zones are necessary for cleansing our water and for wildlife habitat, and virtually every federal and state resource agency has policies and programs protecting riparian zones.

Geologists and river experts on the Save Buffalo Bayou defense team also believe that the flood control project will greatly increase the volume and velocity of water through the engineered channel, threatening vulnerable property downstream, including Buffalo Bayou Park.

The BBP’s Buffalo Bayou Park, which is in part a project of the flood control district using “natural, stable, channel design,” is already suffering from erosion and unstable banks as a result of the removal of riparian vegetation and disturbance of the banks. Projects using so-called “natural channel design” have a high rate of washout and failure.

Save Buffalo Bayou set out signs all along the bayou beginning at the Woodway not-a-boat-launch in a section of Memorial Park that remains closed to the public for no good reason. A stunning twelve-foot high vertical banner of a night heron by Houston artist Frank Tolbert hung from the railroad trestle that crosses the park east of the Arboretum.

More signs announced the beginning and end of the nearly 1.5 mile destruction zone, the 10,000-year-old cliffs that will be obliterated and the forest and wildlife habitat that will be destroyed. Private property owners in the destruction area opposed to the project also hung banners and set out signs.

Someone removed our fourteen-foot-wide banner that said “Save Buffalo Bayou Before It’s Too Late” from the Shepherd Drive pedestrian bridge during the day. We hope it was a mistake, and we ask for the return of our banner. 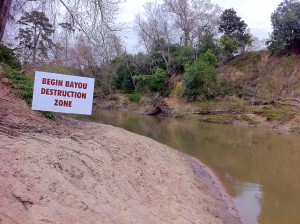 Sign erected by Save Buffalo Bayou announcing the beginning of the bayou destruction zone during the annual Buffalo Bayou Regatta. 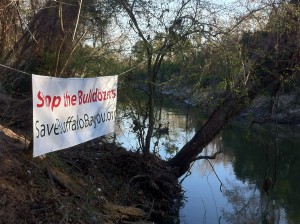 Save Buffalo Bayou banner displayed by a property owner on the north bank of the bayou in the project area during the annual Buffalo Bayou Regatta Saturday, March 7, 2015.

Funding for the project comes from Houston and Harris County taxpayers, who are contributing a minimum of $4 million to destroy a valuable natural asset, and from the River Oaks Country Club, which owns the entire south half of the project area and which is “donating” $2 million to have the flood control district “restore” the banks of its golf course. The club is currently renovating the golf course.