But why should the public not have access to the bayou through the park now, since there appears to be no legal or even safety reason why this part of the park should not be open in the meantime? The parks department could erect a temporary guardrail above any drop-off it deems dangerous, as it has done in Buffalo Bayou Park. (See photo below.) There’s already a gate and a parking lot.

Newbery referred that question to the director of the parks department.

So we sent an email to Joe Turner, director of the parks department, asking him about that. We also asked why that entire park section west of Loop 610, a forested area with a lovely, natural pool, has been closed to the public for some ten years and why an old asphalt path providing access for boaters to Buffalo Bayou through that scenic, historic area was torn up that many years ago.

Actually this was the second time we have written those questions to the director of the parks department.

As we have pointed out before, it is a violation of state law to take or change the use of public parkland without public notice and a hearing.

The parks department director has not yet answered either of our emails. But a phone call late Friday afternoon to the director’s office reached Erika Madison, Turner’s administrative assistant.

The parks director was not in the office, but Madison assured Save Buffalo Bayou that the director was “usually quick about responding” and that we “should probably get a response by Monday.”

But feel free to contact Parks Director Joe Turner yourself about this: 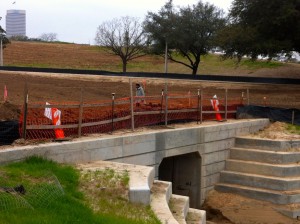 Temporary guardrail above a giant drainage outfall in Buffalo Bayou Park similar to the outfall in Memorial Park at Woodway. Photo taken Feb. 27, 2015.

2 thoughts on “The TIRZ, Parks, and the Texas Constitution”