Uptown TIRZ Board to Meet: Is The Closed Woodway Not-A-Boat Launch on the Agenda?

This nearly 1.5 mile stretch, which passes between Memorial Park and the Hogg Bird Sanctuary on the north and the River Oaks Country Club on the south, is one of the last relatively natural reaches of the bayou left in the city. Riparian areas are vital for clean water, erosion and stormwater control, and wildlife habitat, and bulldozing riparian zones is exactly the wrong thing for government officials to be demonstrating.

Notice of Wednesday’s Uptown Development Authority board meeting and the agenda were posted on the public bulletin board outside City Hall on Bagby Street. We drove downtown to check it out, since the notice is not posted online. See photos! 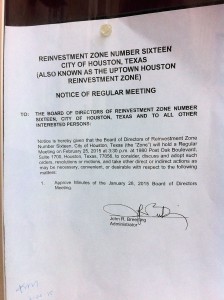 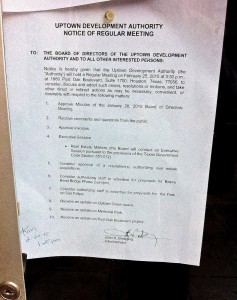 The agenda does not refer specifically to the Woodway project, but it does list “an update on Memorial Park.” The TIRZ 16 is spending $1.8 million on the proposed Memorial Park Master Plan and over the next ten to twenty years plans to spend some $150 million in public money on capital improvements to the 1,500-acre, 90-year-old park.

A TIRZ is a tax increment reinvestment zone, usually with a limited life span of thirty years, that has had its appraised property value frozen at the level on the date of creation (1999 in the case of the TIRZ 16). All taxes on the increased value of the property in the zone since that date go not into the city and school district treasury but into the coffers of the TIRZ to spend.

The TIRZ 16 was expanded in 2013 to include Memorial Park and its term extended by eleven years to 2040. 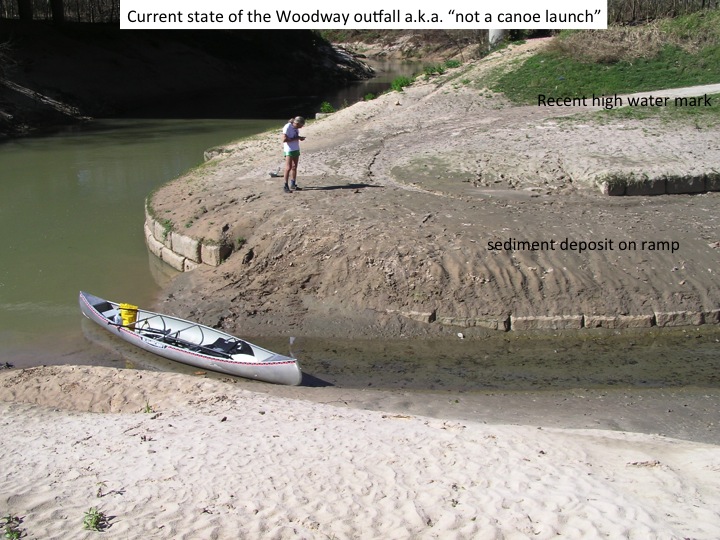 The not-a-canoe launch in Memorial Park at Woodway west of Loop 610 is officially closed to the public. Photo taken Feb. 9, 2015, by Tom Helm.