Hupp, who was speaking to the Briar Forest Super Neighborhood council on Jan. 20, is the water quality director for the BPA, which was founded in the 1960s to protect the natural banks of Buffalo Bayou from the bulldozers of the Harris County Flood Control District. Hupp lamented that a representative of Flood Control wasn’t there to help him make his case for bulldozing and dredging some 80 percent of a healthy stretch of our wild, southern bayou for more than a mile in and around our public Memorial Park, including the great cliffs of the Hogg Bird Sanctuary. This $6 million boondoggle, touted as “bank restoration and stabilization,” is called the Memorial Park Demonstration Project (MPDP). Demonstrating exactly the wrong thing to do on the bayou by razing the riparian forest, the project will destroy the bayou’s ecosystem and, according to the BPA, re-engineer it to “a more natural state.”

City Council Member Oliver Pennington was at the meeting. Pennington, who is running for mayor, represents District G, which includes Briar Forest way out there and much closer into town, the south bank of Buffalo Bayou in the “bank restoration” project area. The south bank, which is half of the project, is owned entirely by the River Oaks Country Club, founded in 1924, of which Pennington is a member and which is donating $2 million or one-third of the projected cost of the “stabilization” project. The club is in the process of digging up and rebuilding its golf course, which over the decades has encroached on what was once thick riparian forest, moving closer and closer to the edges of the high banks of the bayou. (Hupp, in his Power Point presentation, showed a series of aerial photos of this process, although that was not his point in showing the photos.) Alas, replacing forest with manicured lawn has weakened the integrity of the banks. (Mowed grass has short roots, and deep roots are part of what holds riverbanks together.) More recently the process of rebuilding the club golf course has involved killing off the grass and vegetation on the high banks, felling old trees, bulldozing the denuded soil and running heavy equipment over the banks, all of which further destabilizes the banks and dumps tons of muddy sediment into the bayou.

The new golf course plan is by Tom Fazio, famous for his shoreline and over-the-water golf course designs. 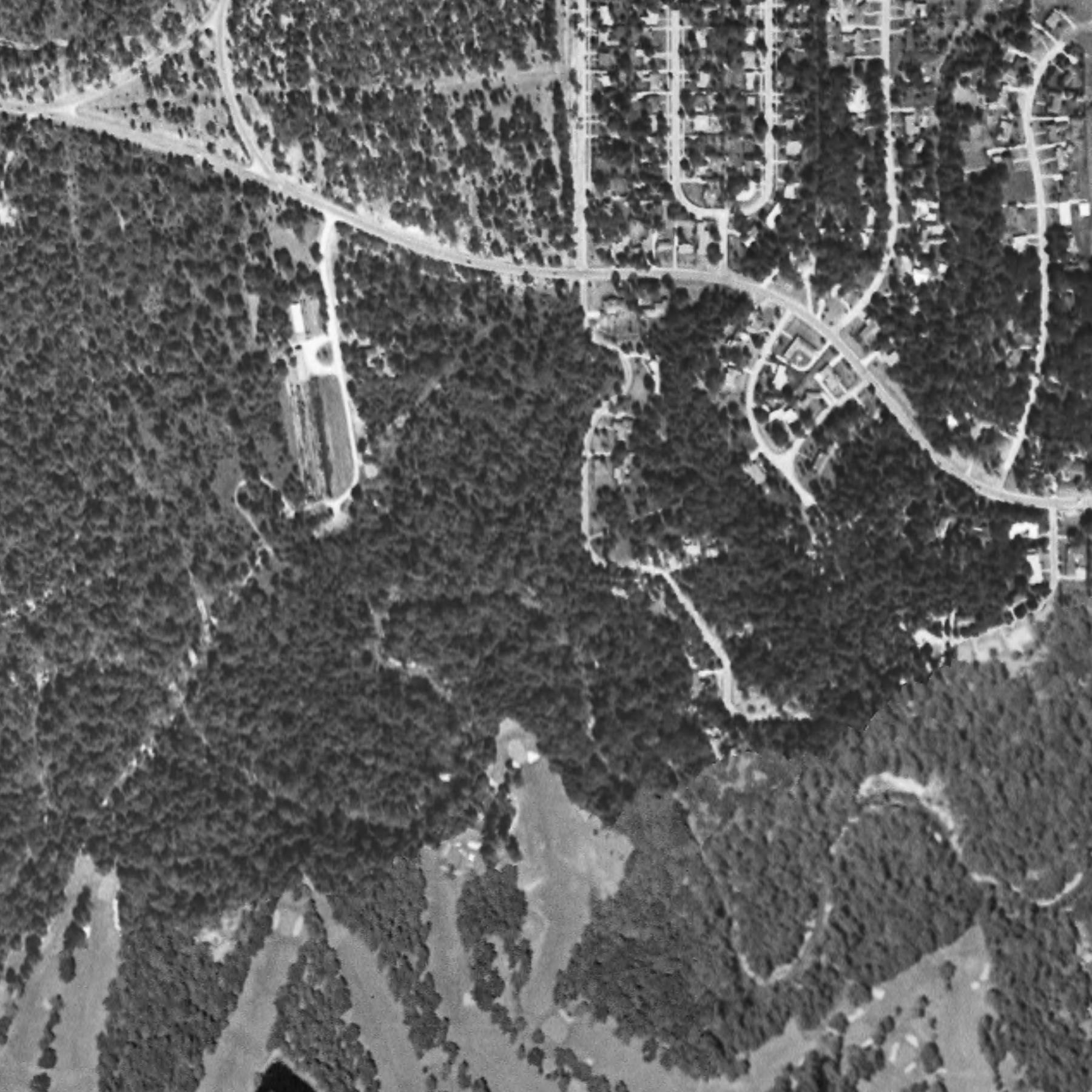 An aerial photo taken in 1953 of the bayou and surrounding riparian forest in the project area. 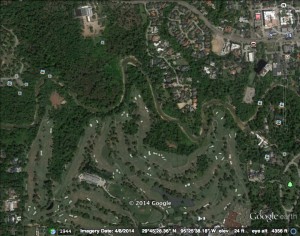 Google Earth image of the project area April 2014. Note the loss of forest on the south bank from enlargement of the golf course.

Pennington, who spoke before Hupp’s presentation, said he was “not an expert” but that he voted in favor of spending $2 million of city taxpayer money to bulldoze, dredge, and channelize the wild bayou in Memorial Park because it would “normalize” the bayou “to the way it originally was.”

This was a theme brought up by Hupp, who showed a painted 1908 postcard of Long Reach, a section of Buffalo Bayou along Magnolia Park near the Houston Ship Channel. 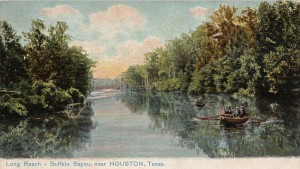 A postcard painted in 1908 of Long Reach, Buffalo Bayou, flowing past Magnolia Park near the Houston Ship Channel on the far east side of downtown.

For comparison see this July 2014 photo of Buffalo Bayou in the area targeted for “restoration” by the BPA and the Flood Control District. 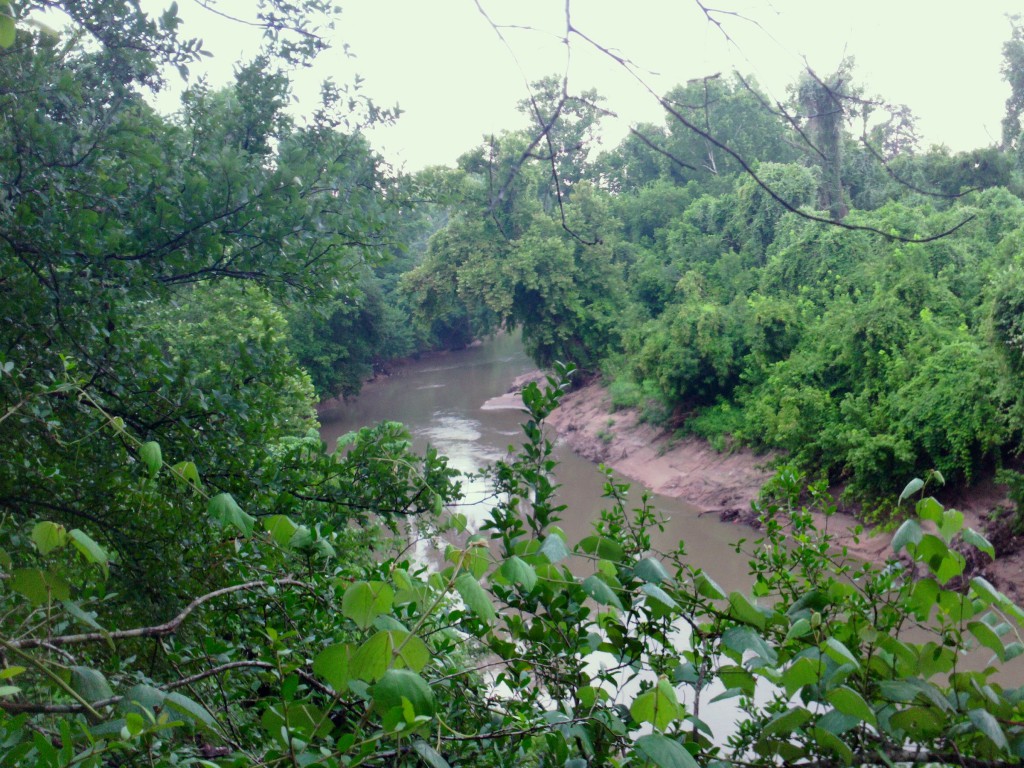 As another example of what the new, “restored” bayou will look like, Hupp, who claims the “restoration” project will eventually produce a closed canopy forest over the bayou (not depicted in the 1908 postcard), also showed a photograph of a 2006 “natural channel design” project on Cypress Creek in Meyer Park in west Houston. 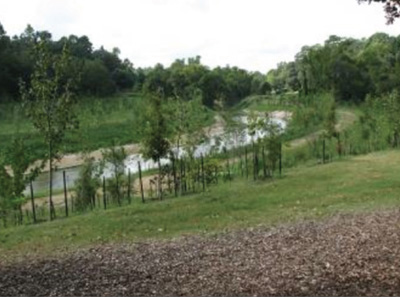 Meyer Park, Cypress Creek, in October 2006. The Harris County Flood Control District uses this as an example of what Buffalo Bayou in Memorial Park will look like after “restoration” to a “more natural state.”

Here is what that section of Cypress Creek looked like last May, eight years later. Do you see trees forming a canopy or even overhanging the creek? 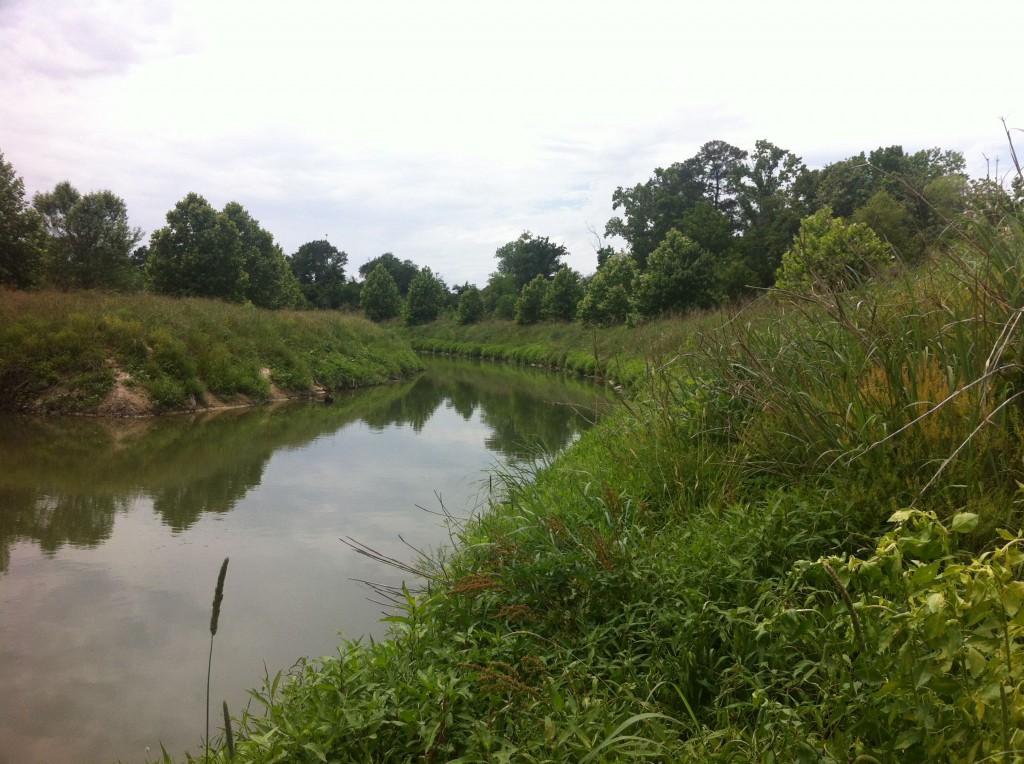 A project to control flooding or not? More water flowing faster or not?

We thought we heard Pennington mention flooding as a reason for his support for the project. But then Hupp, when asked about this later in the evening, said the project would not reduce flooding, contradicting the purpose of the project as described by Michael Bloom, sustainability manager at R. G. Miller Engineering and a member of the board of the BPA. During our presentation to the Briar Forest council in December, Bloom, as we understood him, said that channelizing the bayou was needed to increase the capacity of the bayou to carry stormwater and that all that riparian vegetation in Memorial Park was “choking” up the river and causing water to back up and flood west Houston. This is the view of Buffalo Bayou as nothing but a “big drainage ditch” as articulated by Harris County Precinct 3 Commissioner Steve Radack after our appearance at Commissioners’ Court in early December. Radack’s west Houston precinct includes much of Buffalo Bayou from Addicks and Barker dams and reservoirs, Terry Hershey and Bear Creek parks all the way eastward to Loop 610.

The Flood Control District’s application for a federal permit says in several places that the project will allow “the stream to convey stormwater and sediment loads more efficiently.” None of our experts could think of any way this could happen without increasing the volume and velocity of the water flowing through the project area.

At the same time, the permit application says that razing and grading the slopes of the banks of the bayou to create “bankfull benches” will “decrease instream velocity.” But Mathias Kondolf of the University of California at Berkeley, one of the world’s leading river scientists, said in his comment letter to the Corps about the project that removing riparian “roughness” (vegetation) from the floodplain has been shown to increase the velocity “across the floodplain.”

The Flood Control District and the Corps have been exchanging comments and responses about the project, according to Dwayne Johnson, regulatory project manager for the Corps’ Galveston District office. Johnson said in an email Jan. 20 that he expects that within the next thirty to sixty days the Corps will have a response and possible new Public Notice with request for comments only on the changes made since the original Public Notice about the permit application last year.

Sand on the sidewalks

At the Briar Forest meeting, Pennington then said that flooding had nothing to do with his support. He was in favor of the project because it would “keep sand off the sidewalks of Buffalo Bayou Park” downstream east of Shepherd.

Sadly, this misguided “keeping sand off the sidewalks” argument is the stated reason that the Buffalo Bayou Partnership also supports the bulldozing project. But, as we have repeatedly pointed out, the amount of sediment contributed by this historic natural area is miniscule and the project itself will most likely result in a great deal more “sand on the sidewalks.” Moreover, according to our experts, the increased flow and velocity of the water resulting from a deeper, shorter, smoother river will likely increase erosion within the project area as well as along the vulnerable and eroding banks of the BBP’s popular, still unfinished Buffalo Bayou Park downstream between Memorial Drive and Allen Parkway.

But Hupp claimed that water would be going through the project reach at the same rate as before. There would be no increase in volume or velocity, he said.

Among Hupp’s other statements that surprised us:

Aside from the fact that there is overhanging tree canopy on this stretch of the river (see above photo), one of the many criticisms of the MPDP is that the project will raise the temperature of the river by removing the existing overhanging tree canopy. (In addition to killing the bayou’s ecosystem and destroying the aquatic and wildlife habitat by razing the riparian forest, dredging, digging up, and filling in the bayou.) Raising the temperature of the river damages the ability of aquatic life to survive. It would take many decades or even a century or more for Hupp’s theoretical “closed canopy” or even overhanging trees to grow. And why would new trees planted in fluffed-up dirt be able to gain a foothold and withstand powerful floodwaters better than the existing riparian forest that’s been there for at least a hundred years? It’s questionable whether the Flood Control District even wants trees and vegetation on the banks impeding the flow of water. Based on photographs of Cypress Creek that Hupp showed and on the district’s Buffalo Bayou Park project, there will be no overhanging canopy. (Yes, Buffalo Bayou Park was a flood control project, touted by HCFCD Director Mike Talbott to Channel 13 reporter Ted Oberg as a model for this project.)

What?!! Isn’t that what we are arguing? Leave it alone!

Hupp and the BPA show very few photographs of the current state of our beautiful bayou in the project area. Most often they show photographs of our great sheer cliffs and claim that they are the result of recent erosion. (They are not.) Or they show over and over again the same photographs from 2006 of trees falling off the Rains Way riverfront property of Ray and Terri Thomas, shortly after the Thomas’ bought that residential land on the north bank of the bayou. That land, which is in the project area east of the park, had been virtually clear-cut of riparian buffer, and as a result the remaining trees on their property lost their roothold. The Thomas’ repaired that damage nine years ago using the services of soil bio-engineer Robbin Sotir. They now claim that they have no erosion problem on their property. (See this comment letter written by Ray Thomas to Save Buffalo Bayou.org.)

They have no erosion problems!

So why is the public needlessly paying to “restore” their property again?

Terri Thomas is a board member of the Bayou Preservation Association and the Memorial Park Conservancy, which also supports this project, and she has been actively promoting bulldozing the bayou for years. Many of her neighbors along the bayou oppose it.

At the end of the Briar Forest meeting Hupp handed out a postcard titled “Preserving Buffalo Bayou” with the slogan “Stabilizing and Preserving Buffalo Bayou to a More Natural State.” The postcard showed a 2010 project in the state of Georgia “similar” to the bulldozing project on our Buffalo Bayou. There were two photos of a small stream: one taken in winter when all is brown and bare but otherwise looks fine (other than the possibility that someone might have driven a vehicle in it), and one taken in spring/summer two years later when all is lush and verdant. Difficult to be certain that the photos were taken in the same spot on the stream. Other than that, it’s even harder to understand what the postcard is intended to demonstrate. There are no trees overhanging the stream in the “after” photo.

Even more difficult to understand: why is the BPA pushing this project so hard?