Will There Be a Final Solution?

The Chronicle has graciously published an edited version of the article that appeared on our website on Nov. 12. We have long been concerned that the constant and fruitless engineering of the banks in Buffalo Bayou Park would eventually lead to hardening the banks there with sheet pile or concrete. And in fact, we have it on good authority that as part of the current $9.7 million repair project, the Harris County Flood Control District had planned to insert sheet piling into the bank near the Police Officers Memorial. But apparently the contractor was unable to get his heavy equipment into position to do it. SC

The park on that warm, sunny day looked gorgeous, lush, green and glittered with goldenrod. The feathery purple blooms of the Gulf Muhly grass wafted alongside the trails.

Buffalo Bayou Park between Allen Parkway and Memorial Drive is one of Houston’s great treasures, providing a rare experience of nature in the city. The lovely 160-acre park is the result of a $58 million landscaping effort, led by the Buffalo Bayou Partnership, funded largely by private donations, though the public annually provides some $2 million in maintenance and operating funds for the park through the Downtown Tax Increment Reinvestment Zone (TIRZ) #3. Designed by landscape architecture firm SWA Group, the park has won national and international awards.

But what’s happening to the banks of the bayou there?

Regularly described as “designed to flood,” the park, built in a floodway, was more or less completed just in time for what Eric Berger and Matt Lanza have called “the wettest period in Houston history.” The Harris County Flood Control District had just finished a $5 million project to stabilize the banks. Now it’s in more trouble than ever.

Read the rest of this editorial in the Houston Chronicle. 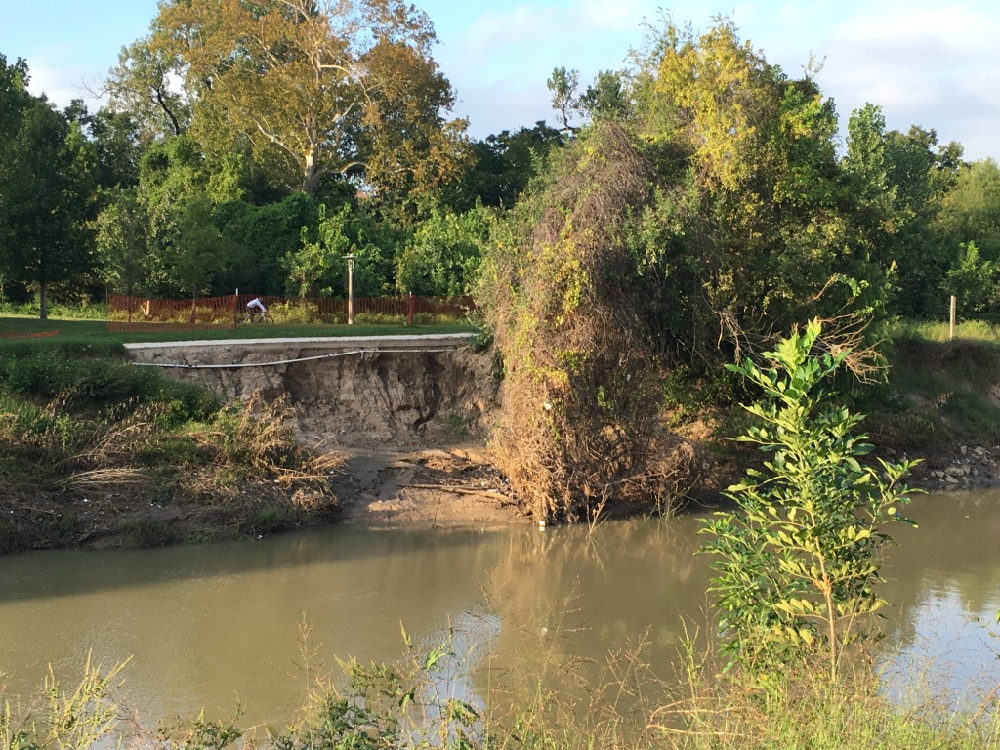 Bank and sidewalk failure with irrigation pipes exposed on the north bank of Buffalo Bayou east of Waugh Drive. Photo Oct. 28, 2019 by SC