What’s Happening to the Bayou Banks in Buffalo Bayou Park?

The park on that warm, sunny day looked gorgeous, lush, green, glittering with goldenrod. The feathery purple blooms of the Gulf Muhly grass waft alongside the trails.

Buffalo Bayou Park between Allen Parkway and Memorial Drive is one of Houston’s great treasures, providing a rare experience of nature in the city, an opportunity to stroll and bike past fields of tall grasses and wildflowers, birds singing alongside the flowing stream. But what’s happening to the banks of the bayou there?

We sometimes get comments from people like, “Wow, Hurricane Harvey really chewed up the park,” referring to the historic August 2017 storm that flooded the Houston region.

But the fact is that the banks and sidewalks began collapsing in the park soon after the Harris County Flood Control District completed its $5 million “Natural Stable Channel Design” project in the park in 2015. (See also p. 33). Now the district is spending nearly $10 million to repair it. 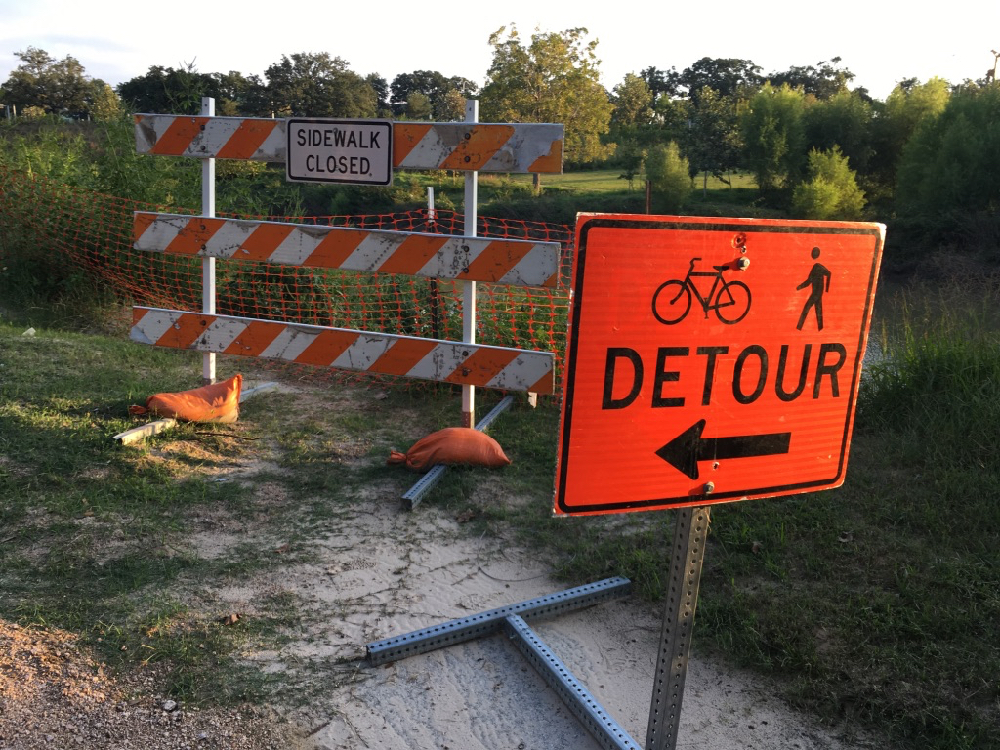 The district’s Natural Stable Channel Design (NSCD) project began near the Sabine Bridge around 2010 and involved the removal of large amounts of native (and non-native) trees and vegetation, scraping and grading the banks, and altering the channel for more than two miles all the way upstream to the Shepherd Bridge.

Natural Channel Design or Natural Stable Channel Design, as the Flood Control District refers to its version of the controversial “stream restoration” methodology, was the basis for the Memorial Park Demonstration Project on Buffalo Bayou in Memorial Park. First proposed in 2010, that $12 million project, based on a flawed analysis of the type of bank collapse we have on Buffalo Bayou, met with popular opposition and fortunately was dropped by the Flood Control District after Harvey.

Natural Channel Design, widely used in government agencies, also has been widely criticized as unscientific, damaging, and prone to failure. The Harris County Flood Control District has a policy of using Natural Stable Channel Design wherever feasible (p.9), though the district did not use it in Terry Hershey Park in 2017, where it spent nearly $2 million to harden the north bank with massive concrete blocks. 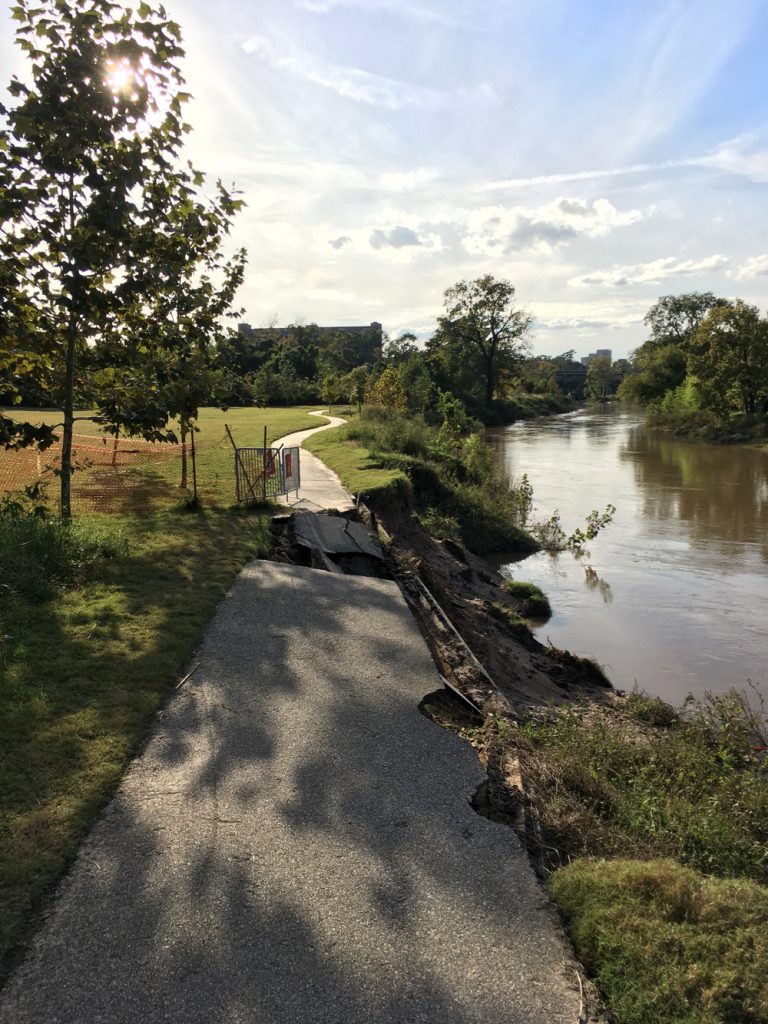 This sidewalk upstream of the Dunlavy in Buffalo Bayou Park began collapsing in 2015 soon after the “improvement” of the banks was finished. Photo Nov. 10, 2019, by SC

The $5 million-plus taxpayer-funded NSCD project downstream in Buffalo Bayou Park was part of the $58 million renovation and landscaping of the 160-acre park, led by the Buffalo Bayou Partnership, largely privately funded. SWA Group was the landscape design firm. The public annually provides some $2 million in maintenance and operating funds for the park through the Downtown Tax Increment Reinvestment Zone (TIRZ) #3.

Regularly described as “designed to flood,” the park, built in a floodway, was more or less completed just in time for “the wettest period in Houston history.” Since 2015, the concrete and asphalt sidewalks built into the lower banks, along with the concrete ponds in the dog park, have been repeatedly closed for lengthy repairs, with the large dog pond permanently filled in 2018, even after cracks had been sealed. The Partnership, which operates the public park through an agreement with the City of Houston, has spent some $3 million in private and public funds on flood-related repairs since the park was opened, including at least $400,000 in 2016 and $2.5 million following Harvey. This sum does not include the $3 million in federal funds the Flood Control District planned to spend in 2018 repairing trails and removing sediment.

One thought on “What’s Happening to the Bayou Banks in Buffalo Bayou Park?”


Standard by Save Buffalo Bayou 2 years ago 1 Comment Uncategorized