Summertime on That Bend in the Bayou

And the Living is Uneasy

Well, Jim was back in town, so we hiked out to that high bank in Memorial Park to take our summer shot for the series, A Bend in the River, documenting the same location on Buffalo Bayou throughout the seasons since 2014.

We went with some trepidation. Jim hadn’t seen the ongoing destruction of the south bank by the River Oaks Country Club.

It was unusually hot, even in the woods. The temperature was about six degrees above average for July. We’re also behind on rain. Flow in the bayou was way down and continues to be very low. On that Monday when we were there, it was about 100 cubic feet per second. Median or base flow is about 150 cfs this time of year.

Drowning Out the Sounds of Nature

Usually the woods are filled with bird song, the calls of courting frogs, the rattling of cicadas and the splash of turtles sliding off into the water. But mostly what we heard when we arrived at our usual overlook was the growling of heavy machinery and the banging of concrete riprap into the opposite bank. From there we could see upstream to Area 1 of the club’s three-part “slope repair” project as well as downstream to Area 2 in the distance.

Here’s a short video of the activity upstream and across the way.

And here is Jim’s wide shot showing Areas 1 upstream and 2 downstream with the pile of dirt in between. 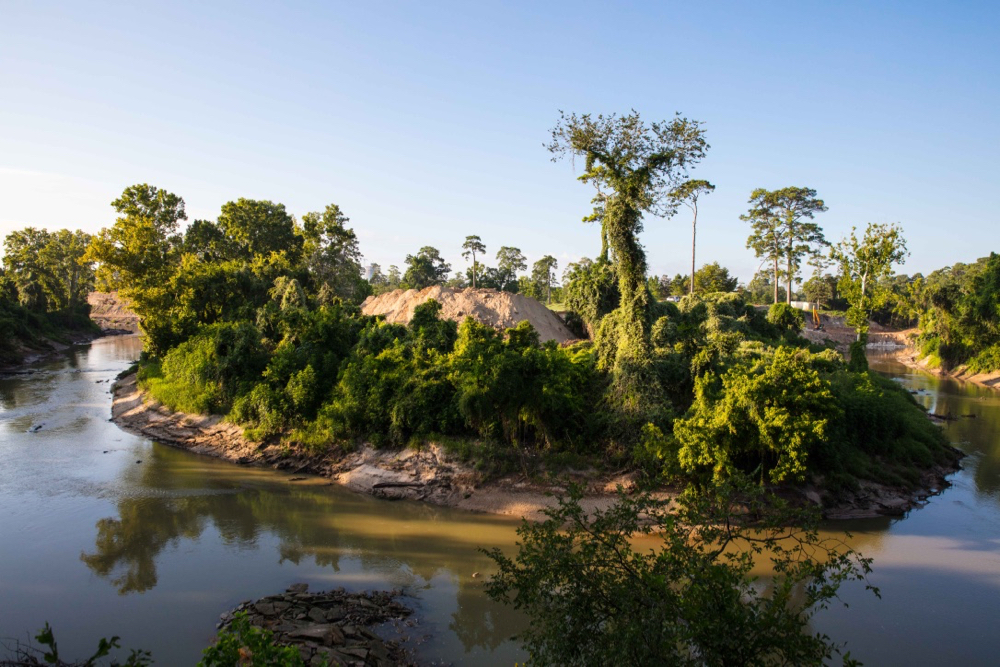 Looking across from that high bank in Memorial Park towards the River Oaks Country Club. Downstream in the distance is Area 2 of the club’s massive, three-part bank destruction project. Upstream to the right is Area 1. The pile of dirt in the center was excavated from the bank. Photo by Jim, July 8, 2019

The good news is that the bank we were standing on in Memorial Park continues to rebuild and revegetate, despite the removal of so much large woody debris by maintenance contractors working for Harris County Flood Control. A certain amount of woody debris against the bank helps protect and restore the bank, helps collect sediment from the stream, and provides habitat.

But the hardening of the opposite bank is going to deflect more erosive force onto our natural banks. In fact, this has already been happening with the concrete riprap and other debris that the club, as well as other property owners upstream, have been dumping onto the bank.

We have filed complaints with the Corps of Engineers about the irregularities in the permit the Corps issued for this thoughtlessly damaging and largely unnecessary project. We are also hoping to persuade the City of Houston to stop issuing construction permits for these kinds of projects, since everybody, including the City, the Corps, and Harris County Flood Control, knows that they fail, increase flooding and erosion, and damage nearby property, including our beautiful public park.

Jim’s Summer 2019 photograph of that Bend in the River: 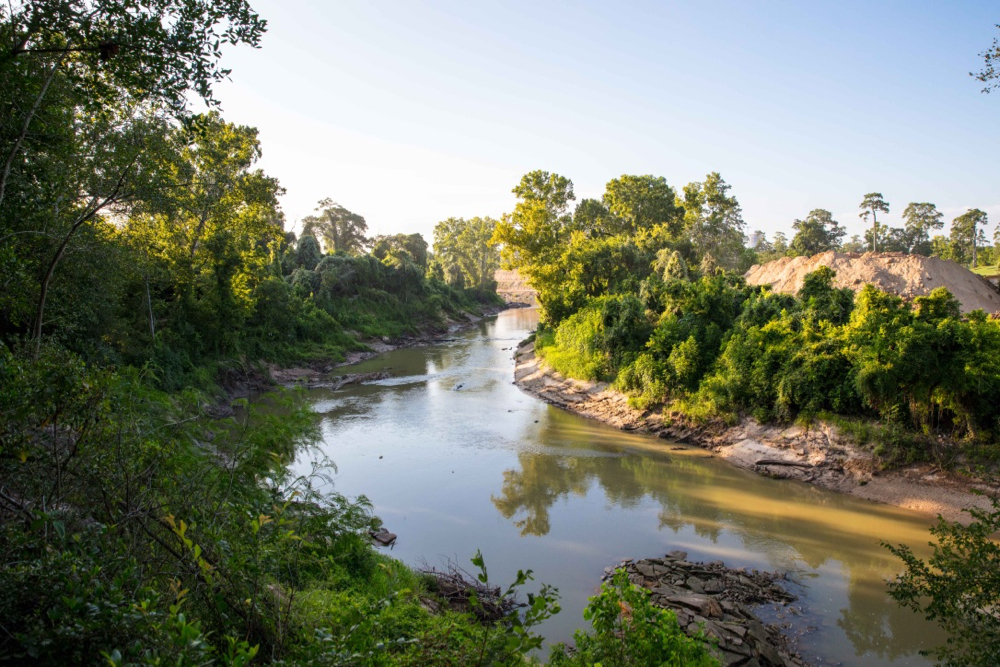 Summertime 2019 on that bend in the river with some of the destruction of the south bank visible in the distance. Pile of dirt is part of the River Oaks Country Club’s costly and excessively damaging bank project. Photo by Jim on July 8, 2019, from that same high bank in Memorial Park.


Standard by Save Buffalo Bayou 7 months ago No Comments Uncategorized