A Cascade of Increasingly Costly Mistakes

An elite private club on Buffalo Bayou has begun an $18-24 million “bank stabilization” project that will likely cause extensive damage to public and private property, including the club’s own property.

The River Oaks Country Club received a permit from the City of Houston Floodplain Management Office on May 6, 2019, to install over 1,500 linear feet of metal walls, concrete pilings, concrete rubble, wire baskets filled with rock (gabions), and other material in three locations on Buffalo Bayou below the edge of their golf course. The locations are opposite Memorial Park and the Hogg Bird Sanctuary, as well as private residential property.

This type of bank hardening has been specifically rejected by the Harris County Flood Control District and the Galveston District of the US Army Corps of Engineers, which governs the coast and southeast Texas down to the Rio Grande. Both agencies nevertheless appear to have given their approval, despite knowing that such unnecessarily costly projects often fail, damage nearby property, and even increase flooding.

“Bank armoring at a single point of erosion has been shown to be ineffective along Buffalo Bayou,” noted the Corps in a 2014 publication specifically referring to this stretch of the river. “The isolated bank armoring installed to deflect the erosive shear stress at the point of failure, in most cases, is attacked at one or both of its terminal ends, resulting in eventual failure. This type of armoring redirects stream energy to a new spot location downstream, creating a new point of stress.” (p. 4)

The Federal Emergency Management Agency (p. 8), the Corps, and the Flood Control District recommend against bank hardening projects due to, among other reasons, the “lack of shear stress reduction” and “the erosive energy transfer it would place on the opposite bank of the bayou at a downstream location.” (p. 21) 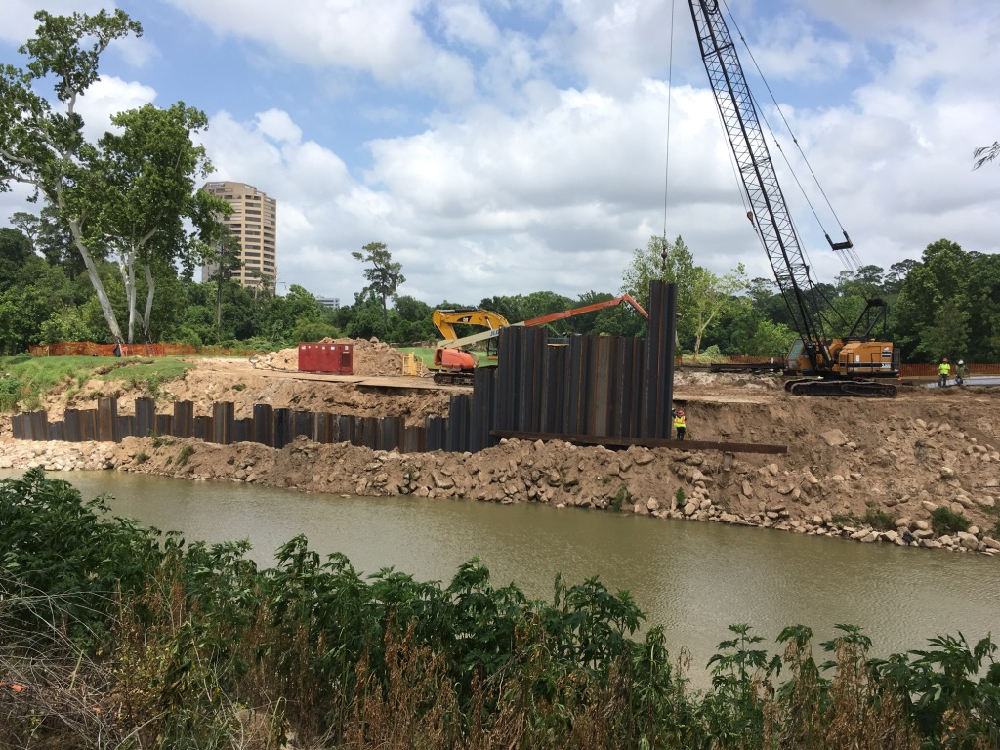 Heavy sheet pile walls being pounded into the south bank of Buffalo Bayou by the River Oaks Country Club. Area 3 of three locations receiving similar treatment. The water level was at base flow of around 145 cubic feet per second. The work was clearly being conducted in federally-protected waters below the Ordinary High Water Mark. There are also federally-protected wetlands here. Photo May 22, 2019. 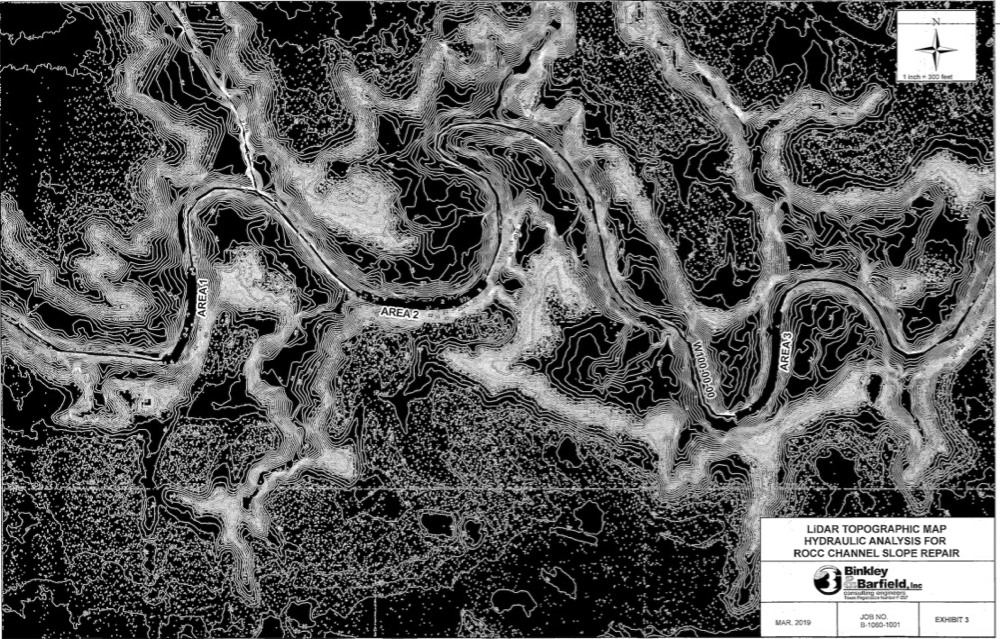 An outdated LIDAR topographic map shows an inaccurate path of the bayou channel flowing past Memorial Park on the north and the Hogg Bird Sanctuary on the northeast. Image from the April 2019 hydraulic analysis submitted to the City and Flood Control District by Binkley and Barfield on behalf of the River Oaks Country Club. Areas 1,2, and 3 are the “slope repair” project areas on the south bank of the bayou below the River Oaks Country Club golf course.

The initial metals walls being pounded into the bank at the downstream end of the club’s golf course are opposite residential properties. A preliminary analysis showed that they will indeed “displace” the club’s “erosion consequences onto their neighbors,” and that the “displaced consequences will be more expensive than the ones [the club] seeks to avoid.”

The on-site analysis was conducted by a professional geologist working with Save Buffalo Bayou.

The project will similarly cause increased erosion of the forested banks of Memorial Park upstream, a 1500-acre public park currently undergoing $300 million worth of landscaping. Management of the park is under contract to the Memorial Park Conservancy. Of the 28 members of the Conservancy board, at least six are members of the River Oaks Country Club, including the chairman and vice chairman, as is a major donor.

Among other problems, the project maps use an outdated LIDAR topographic survey of the area, possibly from 2008, that shows an inaccurate path of the bayou channel.

The project maps also exaggerate the club’s property line, which only extends partially down the bank to the “gradient boundary.” The Port of Houston (the public) owns the submerged lands of Buffalo Bayou.

The club has other less damaging, less costly, and more effective methods of protecting its bank. In mid-April Save Buffalo Bayou contacted the club leadership with recommendations and information but received no response. The club is led by board chairman Randall B. Hale. Board member Steve Lindley has been in charge of the golf course and bank projects.

In mid-April Save Buffalo Bayou also contacted the Memorial Park Conservancy, the Houston Parks Department, City officials, including the Mayor and City Council representatives, among others, about its concerns for the park. There was no response.

4 thoughts on “Private Club Destroying Bank of Buffalo Bayou, Threatening Self and Neighbors, with City Permission”


Standard by Save Buffalo Bayou 4 years ago 4 Comments Uncategorized