Well, we were confused too and a little upset as we listened to Evelyn Merz of the Houston Sierra Club being interviewed this afternoon on KPFT by Mike Honig of Thinkwing Radio about the Memorial Park Demonstration Project. That project would have stripped, dredged, and rerouted over a mile of Buffalo Bayou flowing past Memorial Park in the middle of Houston. The stretch is a historic nature area, one of the last remaining publicly-accessible forested stretches of the bayou in the city.

But the more we listened, the odder is seemed. Above all because the project is dead. Save Buffalo Bayou was founded over four years ago to stop this pointless project, which was promoted by Kevin Shanley of SWA Group, the landscape architecture firm responsible for Buffalo Bayou Park. (See the problems here.) The firm also happened to be on retainer with the Harris County Flood Control District, which became the official sponsor of the project, believing it had community support. Shanley was then the president of the Bayou Preservation Association. And for a time the project manager for the engineering firm hired to do the project was also on the board of the association.

In any case, it was a terrible, unpopular idea that served no good purpose and wasn’t going to work anyway. Based on a faulty analysis of bank collapse on the bayou, the project cost had increased from $6 million to $12 million. And after Harvey in August 2017, Flood Control District Director Russ Poppe, who inherited the project from his predecessor, publicly declared at a Bayou Preservation Association symposium that the project would not be going forward.

It turned out that the radio interview with Merz was five years old, and someone at KPFT had pulled it off the shelf to fill air time.

Merz, a member of Save Buffalo Bayou’s advisory board, was outside doing chores during the broadcast and just as surprised as everyone else to hear about it. She is also chair of the conservation committees of the Lone Star (Texas state) Chapter of the Sierra Club as well as the Houston Regional Group of the Sierra Club,

Station manager Don Freeman was apologetic, explaining the station operates “on a shoestring.” We urge everyone to support the nonprofit KPFT, a valuable public resource. 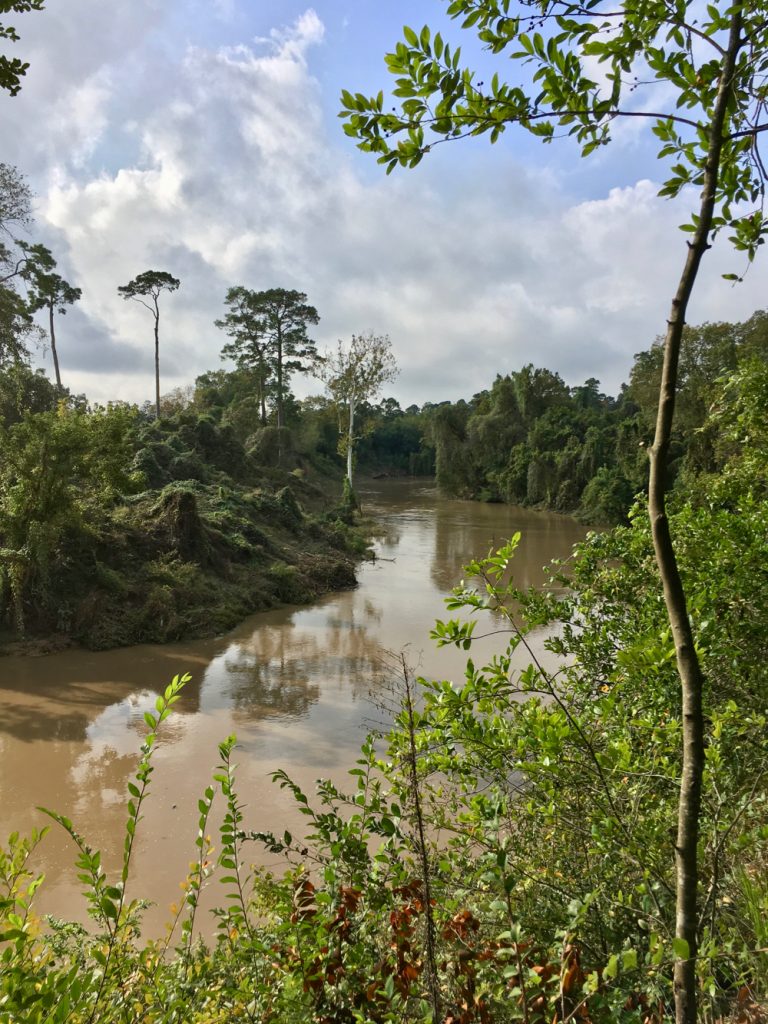 Looking upstream on Buffalo Bayou from a high bank in Memorial Park. Photo Nov. 6, 2018, by SC