And The Waters Will Prevail

What if Houston’s survival depends not just on withstanding a flood, but on giving in to it?

Unprecedented storms have brought three straight years of biblical floods, culminating in Harvey, which inundated 154,170 homes in Harris County—the Delaware-sized area that contains the city of Houston and another Houston’s worth of people outside it. Nearly half of those houses were in neither the 100-year nor the 500-year FEMA flood plain. Why did they flood? In part because Harvey was a leviathan of a storm swollen by a carbon-thick atmosphere, a once-in-10,000-years rainfall event. The weight of the water flexed the earth’s crust and temporarily sank the city a half-inch. And the homes flooded in part because Houston, like other cities, has reshaped its natural flood plains with concrete. Human construction now decides where the floods go.

Several experts I spoke to found that suggestion—that new development was not having an effect on flooding—ridiculous. As Houston has sprawled westward over the Katy Prairie, 75 percent of its flood-absorbent grasslands have been paved over, turning natural detention basins into roads and houses. In Brays Bayou, on the south side of the city, Rice environmental engineering professor Philip Bedient has found that rainfall is up 26 percent over the past 40 years—but runoff is up 204 percent. From 1996 to 2011, impervious surface in Harris County increased by a quarter, and from 1992 to 2010, the area lost almost a third of its wetlands—nearly 16,000 acres. It’s a correlation that’s been noted again and again. “There’s no question that the amount of impervious surface and the destruction of natural ecosystem surfaces has impacted the amount of runoff and flooding that we have seen,” said Shannon Van Zandt, the head of the landscape architecture and urban planning department at Texas A&M. “There’s no question about that. I don’t think it’s plausible to suggest that the detention is taking care of the issue.”

The chief risk facing Houston and Harris County is not the vulnerability of new developments, which do tend to be built higher, better, and upstream, but that of the older houses downstream, many built low to the ground and served by undersize storm drains. It may not be the case that your new neighbor upstream is making you flood. But the standards could be higher. Activists say the choice between an abandoned, flood-prone golf course and a subdivision of 900 homes was a false one. Susan Chadwick, the executive director of Save Buffalo Bayou, a group that opposes development in and around the river, argued in June that the city should have used eminent domain on the course to create a detention pond that would relieve Brickhouse Gully.

The engineers at the Flood Control District don’t disagree it would have been a good place for a pool. As we sat in his office going over flood plains, Todd Ward conceded it was a bit of a missed opportunity. We found the course on an enormous satellite map of Houston on the wall. In a giant city, it’s a small square. But there aren’t many undeveloped parcels of that size left. Some of the just-approved $2.5 billion bond will go toward buying out existing repeat-flooding homes downstream of the newly elevated houses at Spring Brook Village. The bond calls for $35 million of channel improvements to Brickhouse Gully to reduce the risk to 1,300 homes.

Read the rest of this article in Slate. 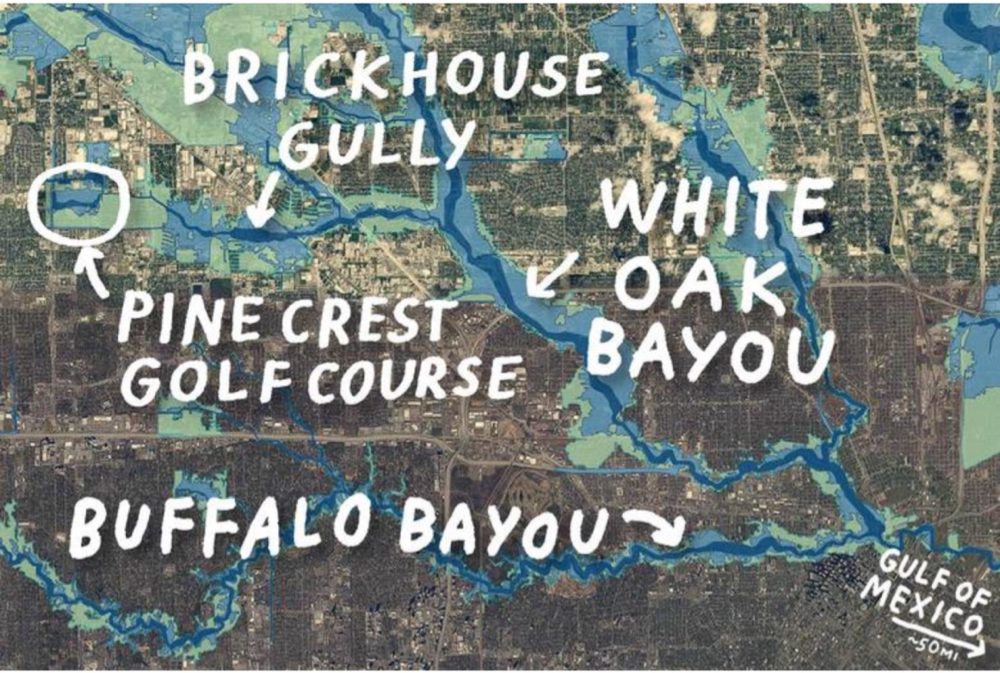