Daniel Grossman reports for Re.Think on the annual American Geophysical Union meeting in New Orleans in December 2017. He also visits Houston and gathers opinions from local academics. Buyouts, making room for the river, stopping storm runoff before it floods our streams are some of the necessary strategies recommended here and elsewhere by those who study these things.

At the New Orleans conference, Emanuel laid out findings he’d published a few weeks earlier in the scientific journal Proceedings of the National Academy of Sciences. Simulating mayhem in a computer program, he’d released thousands of virtual past and future “seed” storms into the Atlantic Ocean and computed their tracks. The likelihood of a storm about as rainy as Harvey has increased by a factor of six in the last 40 years, he’d found. By 2100 the chance of such a deluge will increase another threefold. Then, a Hurricane Harvey will strike Texas once every 5 years.

Buyouts and Room for the River on Buffalo and Other Bayous

Yoonjeong Lee, a researcher at the Center for Texas Beaches and Shores at Texas A&M University at Galveston, says Houston should build Dutch-style flood protection, and she knows where. “Buffalo Bayou would be a perfect place to build a ‘Room for the River’ program.” She says the city could buy up a relatively small number of plots near its banks and – after demolishing any structures on them – construct a riverfront park. The land would be engineered to capture water when the bayou rose, safeguarding remaining districts. Houston has previously installed patches of parkland along its bayous before, but she says the city has to think bigger.

Timon McPhearson, a professor in Urban Ecology at the New School in New York City, says that another way Houston should become more resilient to wetter storms is by controlling how much water rushes into bayous in the first place. He says too much of the rain that lands on the city drains quickly into waterways. “Houston is an extremely paved city,” he says. Replacing street and driveway surfaces with permeable materials will lower peak floods. He also suggests green roofs, covered with vegetation that could provide important ecosystem services that retain – and stall – some of the rainwater.

Albert Pope, an architect at Rice University, doubts that adaptation through infrastructure fixes are sufficient to keep Houston safe from serious flood damage. He says that there’s too little undeveloped land left to accommodate new reservoirs of sufficient capacity, and that further straightening, widening, and bank-hardening can’t force bayous to carry more water. “We’re at the limits to what we can do, engineering-wise,” he says. His solution is more disruptive of the status quo, and Houston’s fix-it-with-concrete ethos. He insists that Houston should do something more transformative and remove all the buildings in its flood plains – 150,000 structures, including those on three-quarters of the acreage in Meyerland – and turn the acquired land into parks.

Read the article, “Lessons From Hurricane Harvey,” published by Re.Think on March 15, 2018. 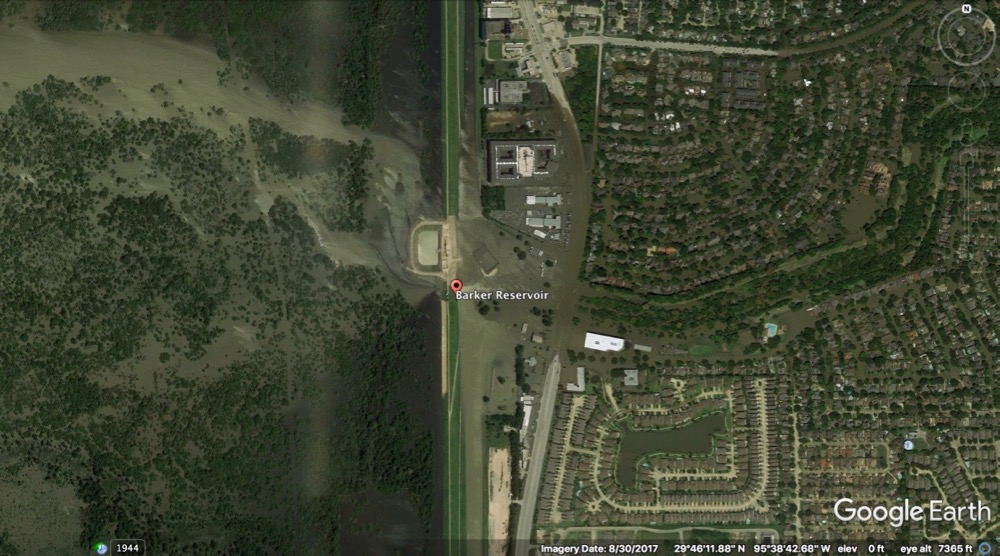 Barker Reservoir on Buffalo Bayou on the left and flooded streets and homes on the right. Google image 8.30.17