Also Voting on New Development at the Same Time

(Updated with What We Said to Commissioners.)

Harris County commissioners will vote Tuesday on a controversial contract for the removal of public forest and excavation of ponds that will divert a modest amount of flow from upper Buffalo Bayou when it floods.

Commissioners will at the same time consider approving hundreds of acres of new residential and commercial development on land draining into Buffalo Bayou through Addicks Reservoir, one of two overburdened federal dams on Buffalo Bayou in west Houston. An excess of stormwater flowing into Addicks as well as Barker Dam from Harvey in late August of 2017 forced the Corps of Engineers to open the floodgates on the two dams for the first time during a storm, causing massive additional flooding and deaths downstream on Buffalo Bayou.

The area of development on both sides of the Grand Parkway (Highway 99) is near the general location of a proposed $300-400 million Third Reservoir that county and city officials have been advocating to reduce flow into Addicks Reservoir and Cypress Creek during storms. Thousands of acres of fields and farmland in the vicinity of Cypress Creek have already been platted for development.

Save Buffalo Bayou advocates detaining stormwater before it enters a stream as well as the preservation and restoration of urban forests, prairies, and wetlands. 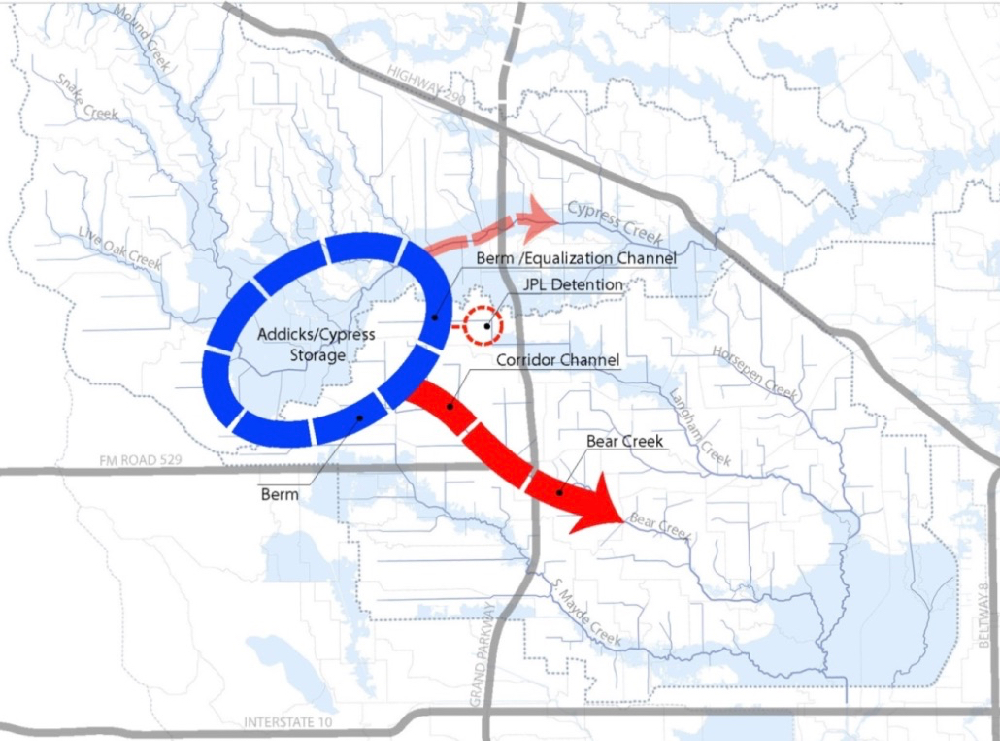 A 2015 image of the proposal by the Harris County Flood Control District for the Katy-Hockley reservoir, known as Plan 5, below Cypress Creek. Like most of the rivers and streams west of Houston, Cypress Creek flows east towards the bay. Image courtesy of HCFCD.

The detention basin project in Terry Hershey Park below the dams is part of a controversial plan that residents and conservationists have been fighting since around 2012. The plan was resurrected after Harvey caused major flooding of homes and businesses along the bayou both below and above the federal dams. Some property owners near the park blame the trees for flooding their homes.

Terry Hershey Park is located along 500 acres of land owned by the Harris County Flood Control District between Highway 6 and Beltway 8. As part of a now generally abandoned approach to flood management, this stretch was stripped and straightened by the Corps of Engineers in the late 1940s as part of the dam project. Trees and vegetation have since grown back.

The detention project initially would create two to three basins capable of holding some sixty acre-feet of flood water on the south side of Buffalo Bayou between Wilcrest and Eldridge, said Alan Black, director of engineering for the flood control district. More detention basins are envisioned. The original plan created some 280 acre-feet of detention.

For context, the maximum capacity of the flood pools of Addicks and Barker reservoirs on government-owned land (not flooding development behind the reservoirs) is 213,124 acre-feet.

Regarding new development in unincorporated areas that ultimately would drain into Buffalo Bayou, Black also explained that “in accordance with Harris County regulations, all development must prove no impact to the receiving channel and this would be no different.”

In addition to the $632,499 contract with RG Miller Engineering to design the initial detention basin plan, county commissioners are also likely to approve a $13 million contract to excavate the basins along Buffalo Bayou in this 6.2 mile stretch as well as remove sediment and make repairs in several miles of channelized streams flowing through developed land into Addicks Reservoir, which is north of Interstate 10.

Black said that the district is expecting to present the results of all these plans to the public between March and May.

The Harris County Flood Control District is legally responsible under its 1937 founding charter for the “conservation of forests,” among other things.

Trees and vegetation, including leaf litter, provide significant rainwater absorption and detention, as well as erosion control, among other vital ecological services such as cleansing the water.

Something Weird About Detention Basins

Date and Time and Place