Out on the Bayou on a Chilly Saturday Morning

Winter Photo of that Bend in the River by Jim Olive

We had to wait a while for a sunrise that wasn’t foggy. Finally the skies cleared, and just after dawn we headed through the woods of Memorial Park for our winter shot of that bend in the bayou that we have been documenting since the summer of 2014.

It was cold! Barely above freezing. Fortunately Jim had brought some extra gloves for his assistant, who carried the tripod through the trees down the winding dirt path carpeted with dried sycamore leaves, carefully eyeing the leaning but stalwart trunk of the headless giant loblolly pine that had died in the drought of 2011. Several summers ago on this path we had encountered a giant rat snake curled up in the remains of a 100-year-old concrete pipe from the days of Camp Logan, the World War I military training camp that occupied the park before it was a park. No need to worry about snakes in the cold, pointed out Jim, as we stepped over a decaying log. Not that a harmless rat snake is anything to worry about. Jim, an expert naturalist, commented that the big snake was likely curled up asleep deep inside the shelter of the pipe.

The landscape was much changed. It was winter, for one thing, so there was more visibility through the leafless trees and vegetation. Also there were fewer trees and vegetation, so much having slid and fallen into the bayou with the sloughing of the banks during and after Harvey. The bayou, flowing at about 600 cubic feet per second, was much closer to the path, the flooding river having washed down the banks while at the same time piling new sediment on top of them.

We could hardly locate our regular spot, the bank was so changed. Our landmarks were gone. We walked back and forth looking for the angle, though we had taken a photo in October for our fall shot. To make things more difficult, the rising winter sun was shining directly into our eyes and into Jim’s camera. Jim was discouraged. Should we could come back later? But we waited, sheltering behind some yaupon branches. And eventually the sun hit the opposite bank, and Jim got his shot. 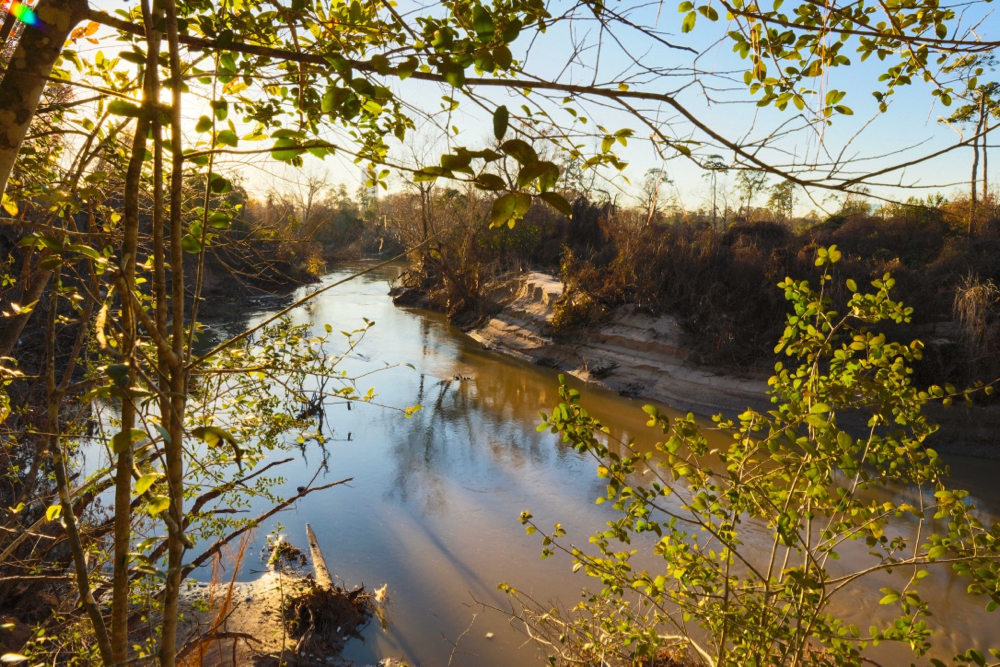 Winter photo by Jim Olive on Jan 13, 2018. Flow was about 600 cubic feet per second. Temperature was a chilly 34 degrees shortly after sunrise about 7:30 a.m. The banks were much changed after the floodwaters of Harvey, with lots of slumping, fallen trees and missing vegetation. We could hardly find our spot. Note the buildup of sediment on the opposite bank.

See the entire series of A Bend in the River under Photos and Films.